I have a jar of Hannah's Pickled Sausages. What now? [closed]

I have never been severed any in my neighborhood but I had no qualms about picking it up in some store when I was out of state. Is it intended to be eaten like a quarter pickle on the side of a sandwich? OR maybe as sliced pickles simple as a condiment? Is it used on a bun like a hot dog as the meat item? Is it used in a casserole recipe with onions and sauerkraut? If the answer to any of these is yes, I will note that I have not found recipes listing them. 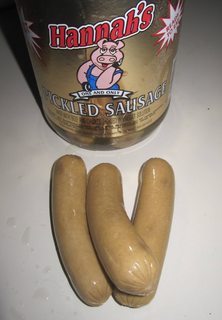 I have had this exact brand many times at parties ... we just snacked on the whole sausages, but you could also cut it and eat it as a quarter pickle. But I can imagine it also working in a sandwich or on a bun if you don't like them straight, but we mostly just ate them as they are. A nice little refreshing snack, especially great after some drinking.

Dishes that I had with pickled sausages:

Diced very small they can give mashed potatoes an extra twist ... when I had them in mashed potatoes we also added some fresh dill and diced boiled carrots. It was delicious. But in the same way, adding a little bit of sourness, I can imagine it being also nice in a hearty potato casserole.

I hope this gives you some ideas. I think the best is to taste it, now that you know you can just eat it straight, and then you will maybe think of something you would like it with most.

Not the answer you're looking for? Browse other questions tagged meat or ask your own question.

7
What are the benefits of using natural casing when making sausages?
7
How to dry homemade pork sausages with proper humidity and temperature?
3
Why do hamburger patties have ridges on one side?
0
Do meat grinders need to have cutting blade
1
Home-made fermented/ cured sausages numbing sensation
0
Are sausages made using the whole body of a chick?
1
Why were my sous vide sausages dry?
1
What would happen if I dehydrated fresh sausages for a couple hours?
16
Spice blends have no flavor?