How do I cook store-bought glutinous rice dumplings?

I bought some pork-filled glutinous rice dumplings from a Chinese supermarket, but I've no idea how to cook them!

Someone told me to drop them into a pan of water to steam for three hours, but that sounds like a very long time and I'd be concerned that they would become too moist and fall apart. 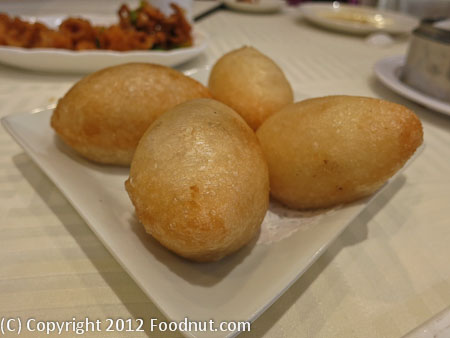 I would not follow the advice of boiling them for three hours, you will likely have nothing left! I would not boil them at all in fact, most dumplings you get from asian supermarkets in western countries are made so that they can be steamed from frozen for 15-30 minutes and then eaten. They are often produced for the catering trade, you see, so quick cooking times are important. The picture you posted looks like they are possibly fried, but it's hard to tell.

I am making the assumption you are not in Asia, and this is a specialist supermarket, so I would simply call up the supermarket and ask. It's pretty likely someone there will be able to speak with you.

If not, the important thing is to make sure that the dumplings are cooked throughout to at least 160F (72C), this will at least make them safe. I'd recommend using a digital instant-read thermometer for the job. The three methods I know of to cook pre-made dumplings are:

All in all I'd try steaming one of them for 25-30 minutes and then testing it. Vary the steaming time accordingly.

As you can see from the picture, these are the deep-fried type of dim sum made of mochi rice with some type of filling within. I find that the best way to "reconstitute" these is to simply microwave them on high for 30 seconds or so until they start to balloon up. The surrounding mochi has become sufficiently soft at this point and the filling is hot, which is causing the ballooning. Be careful not to let them pop/explode!

Not the answer you're looking for? Browse other questions tagged rice chinese-cuisine dumplings or ask your own question.