Advice on use and care of Le Creuset cast iron skillet

Below is a picture of my current cast iron skillet from Le Creuset. As a relative cooking novice, could someone let me know if I have possibly damaged my pan, or if this is normal? I have a Le Creuset dutch oven, and have always cleaned with soap/water and it is perfect, I thought I would do the same here (since both are enameled), but it looks like it may be in need of special treatment.

If this isn't normal, what is the recommended process of keeping this pan clean (daily use and/or the occasional deep clean). 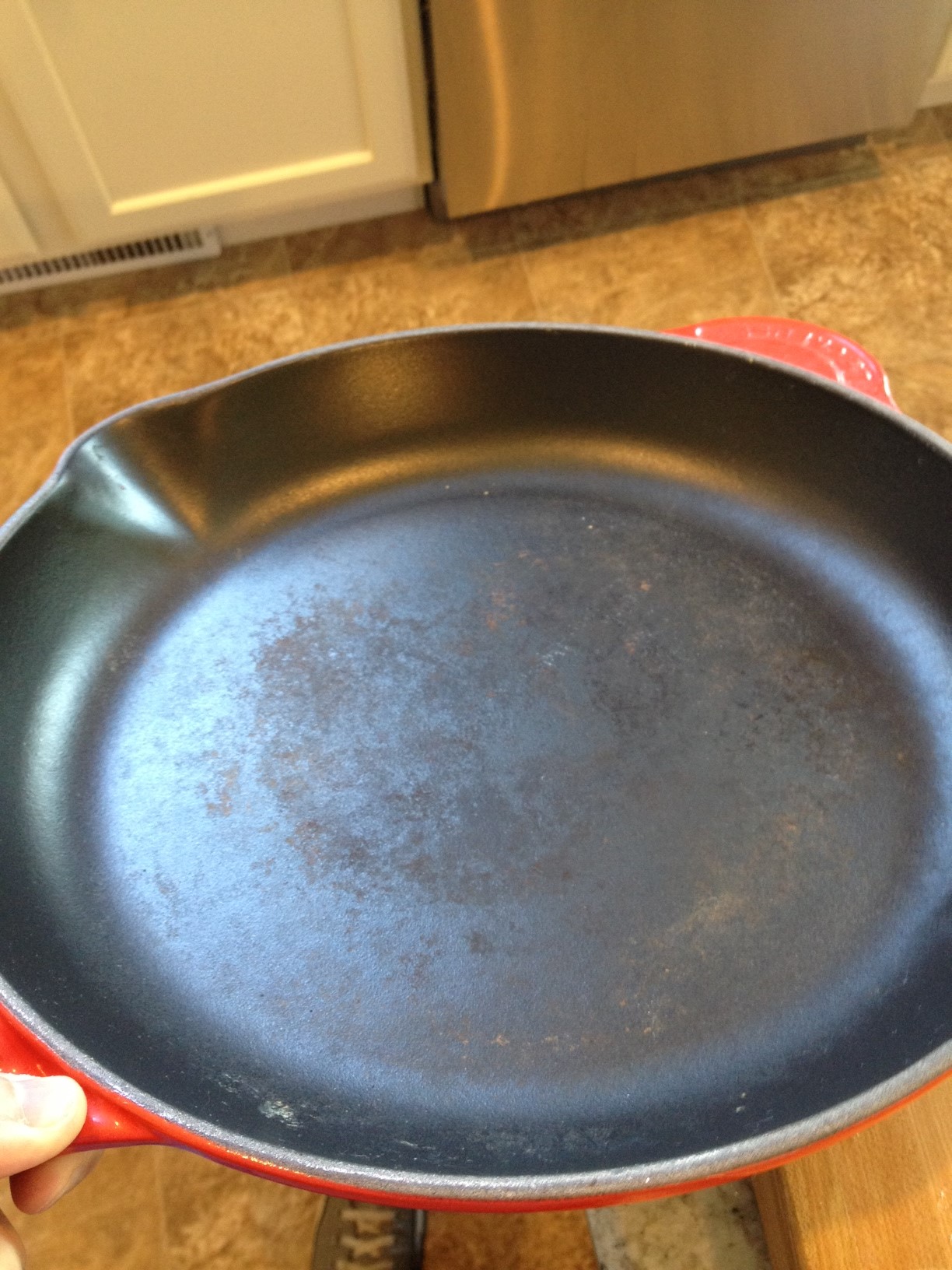 The above pan is not a typical Teflon coated non-stick item. It is a cast iron skillet with red exterior enamel and an interior "Satin Black" enamel. It is not identical to a Lodge cast iron pan, but for care and maintenance, it can be treated similarly. A patina can form on the interior "Satin Black" enamel, which is desirable. The brownish looking area on the surface of the pan is from caramelization, which occurs during the cooking process. Le Creuset says seasoning is not required (unlike other cast iron pans like Lodge), but seasoning the pan will form a better patina, which does improve the natural non-stick properties. As you said, the patina develops naturally, but if you don’t want to wait, then you can help it along by seasoning it. Check Le Creuset's website (someone else linked it) for other details. I usually just use hot water and paper towel to clean with periodic seasoning.

This pan should be cleaned only with a wet cloth and little bit of soap. No scrubbing is required as it can damage the pan. This link may be more useful.

It's difficult to tell in the picture exactly what is going on. There are a few possibilities:

For #2 & 3, it shouldn't be a big deal, you just won't have as much of a non-stick process. If it's #3 and a non-stick pan, be careful, as this is a sign that you've been over-heating the pan, and will likely start flaking off in the future.

Just soak it and scrub it with a plastic scrubber. Then coat with lard or oil and heat it up and wipe off the excess with a paper towel. Le Creuset is enameled and tough stuff, it never peels. I recommend never using soap.

Not the answer you're looking for? Browse other questions tagged cleaning cast-iron or ask your own question.

47
How do you clean a seasoned cast iron skillet?