Can you make a French Buttercream in a food processor? (Experiment Results)

Unless I get a credible and resounding NO! very soon, I'm going to give it a shot. I've recently started using my food processor for more and more whipped egg (not whipped egg white) applications, and they have always turned out surprisingly well. My plan is to try a minor adaptation of Julia Child's French Buttercream recipe. I think I'll use the steel blade until it's time to add the butter, then switch to the plastic blade.

I don't have a stand mixer, and I have no desire to try it with a hand mixer. That leaves my food processor. The feed tube could make really easy work of it, if it works.

I should mention that I'm specifically playing with a potential filling for a dense, dark chocolate, flourless tarte. That being the case, high volume is not necessarily desirable.

If you know of any good reason to stop this madness, please tell me now!

Of course I will update with triumph, failure or anything in-between.

As I said in the question, I used this recipe: Joe Pastry - Julia Child .

Before I embarked on the experiment, I whipped egg yolks with my hand mixer and in my food processor. Since there seemed to be no difference, I proceeded.

While the yolks were whipping, I made my syrup and pulled it off the heat at exactly 148F, and transferred it to a pyrex measuring cup. It was at the next step that I first saw an actual advantage to the use of the food processor vs a stand mixer. There was no need to stop the machine, pour, stop again, pour... I just poured in a slow steady stream until all the syrup was incorporated. One thing I noticed after that is that it was taking forever for the mixture to cool, so I wrapped the bowl in a cold damp towel.

WHOOPS! This isn't supposed to happen! 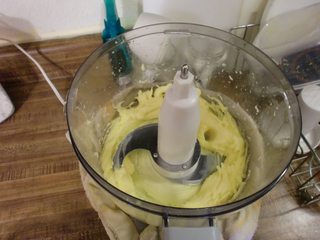 See the hole at 2 o'clock? That's a finger press mark in the still not quite cool mixture. At this point I figured I was toast, but I'd come this far so I kept going. I turned off the machine, took off the lid, and just waited for it to completely cool. When the mixture was completely cool (almost an hour later), I restarted the machine and started dropping in the softened butter. After about a stick I used a butter knife to scrape off the hardened mixture that was still adhering to the blade and bottom of the bowl, and just kept going. When the hardened bits finally dissolved (at about halfway through the butter), I switched from the metal blade to the plastic blade of my food processor. I should note at this point that I found the same advantage to the food processor here as when I incorporated the syrup, the feed tube and lid made it really easy, I only stopped the machine once to scrape down the sides.

The peaks in the bowl were created sicking in the whisk and pulling it out. Because the camera was giving me a hard time, the pictures of peaks were actually taken 10 minutes after the peaks were created.

At this point the frosting was delicious and of a perfect constancy to frost cupcakes by the dip and twist method. Since what I really wanted to do with it is use it as a filling, I took SAJ14SAJ's advice and gave it a 3 minute whip with my hand mixer. That did give it a slightly more matte finish and a bit more structure.

The proof of the pudding is in the eating. EEK is that a BOXED cake?? <hangs head in shame> I refrigerated the bottom layer with the filling (which of course significantly solidified the filling) before placing the top layer, then I let the whole thing come to room temperature, frosted the cake, refrigerated, and smoothed the frosting with a hot spatula.

The chocolate frosting in the final picture was made with the experimental buttercream mixed with melted bittersweet chocolate and powdered sugar. 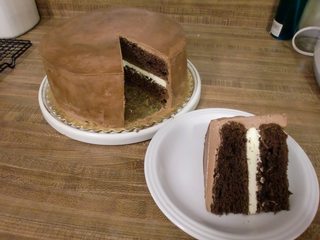 I don't think that I'm going to have replaced my stand mixer in time for the next time I want buttercream, but my results with this experiment are such that I think I will do it again. The one thing I will do differently next time is that I will stop processing every 3 minutes during the cooling stage, remove the lid, and refrigerate for 2 minutes, repeating until the mixture is cool. That was the only point at which I became less than optimistic. If I do it again, I will update with the results of the procedural change.

The purpose of the beating (and thus using a stand mixer) is two fold:

While the food processor is almost certain to form and maintain the emulsion, they are not normally designed to incorporate air into the mixture. While only an actual experiment (on your particular equipment) will be certain, you are likely to get a much more dense, and fudgy product with much less volume than using a stand mixer would give you.

Not the answer you're looking for? Browse other questions tagged frosting food-processing or ask your own question.

3
Technical name for a manual food processor
1
Blender vs food processor vs juicer
3
How can you change flavors in store-bought frosting?
2
Making spice pastes with a food processor
2
Can you cover an angel food cake with fondant?
0
is there a blender/food processor combo still made?
4
Can I make a buttercream using cacao butter?
0
When comparing food processor models, why do some have additional blades?