Are dark walnuts ok to eat?

I bought a bag of walnuts from the local farmers market (in NZ), but some of them are dark colored on the outside and almost black inside. Is this normal and are they ok to eat?

Also noticed some of them are slightly open. 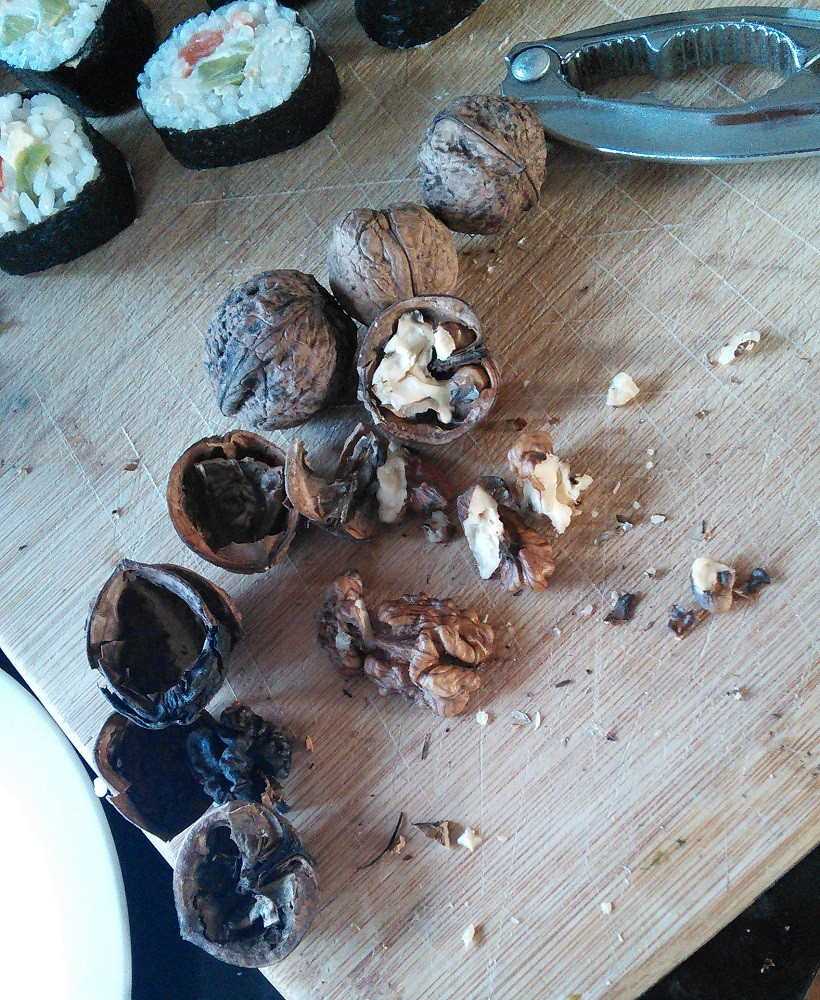 I'm not sure what causes it and what food safety issues may be involved but I used to have a walnut tree and got a few from time to time that looked like that. I had a small taste once and they were really bad, not worth keeping. I'd put it down to some sort of rot and I live in Tasmania with a relatively similar climate.

Looking for a reference on common causes the best I've been able to find is from "Diseases of Temperate Zone Tree Fruit and Nut Crops" by Joseph M. Ogawa and Harley English that has a section on kernel mold of the English Walnut, which I'm guessing is the most common variety in New Zealand. This is from a Google book preview that I can't copy / paste so I'm skipping over some parts probably not relevant using an ellipsis:

Under certain conditions several fungi are able to penetrate the walnut shell and cause cause a moldy condition of the kernel. This disorder varies from year to year depending on environmental factors. The invading fungi commonly coat the kernels (...) and also may form masses of greenish blue or grayish-black spores. (...)

The weakly pathogenic fungi that cause kernal mold belong to genera such as Aspergillus, Penicillium, Alternaria, and Rhizopus. These organisms may invade the nuts as early as midsummer if the hulls (husks) have been damaged by sunburn, drought or husk fly.

The book is available for limited preview / purchase for anyone further interested in the topic, but I think the short answer is they'll taste nasty (regardless of any safety issues) so probably best disposed of and maybe complain to the supplier if you got too many in that state and ask for their comment.

The black is " california walnuts". Yes can be little bitter in taste. But they are baged an sold that way. Rather give to the squirrels. Ha they enjoy em.

That is an English Walnut, which are mostly Grown out west.

The Eastern parts of US have Black Walnuts. They taste much better but are hardly ever sold in stores. You have to harvest them yourself. Some are sold in the baking isle but they are horrible tasting.

Do not fear if you see, that the inside part is black and if inner inside is white, because color is due to "nogalina" a dark brown color that emerge of the shell when wet lingering a more extended time in ground before harvesting.

0
How to know if my walnuts are fresh enough to be good to eat?
2
At what point (after clams die) are they ok to eat
8
Egg safety. When to eat and when to not eat
5
Is this Kabocha squash bad?
3
Are those black spots on the inside of kaki safe to eat?
1
Advice on bulk buying nuts
4
Is this dark muscovado sugar safe to use?