Can you thaw a frozen turkey in a dryer?

In the TV show New Girl, there is an episode (season 1, episode 6) in which they are cooking for Thanksgiving but forgot to thaw the Turkey, so they put it in the dryer, but it has some unexpected results.

Is it actually possible to thaw a turkey in a dryer? If one were to try to accomplish this in real life, how would one go about doing it a safe and reliable manner?

Please note that I am not asking, should one thaw a turkey in a dryer. Rather - is it possible?

Ignoring food safety for a moment referring to an example like How Clothes Dryers Work in most dryers air enters near the top, is heated by an element at the rear of the dryer but the air is actually being drawn in / out by a fan at the bottom of the unit. The internal temperature of the air ends up being about 175C so most of what is "floating around" in the dryer will be steam in normal use.

So the real problem I'd see is turkey fat would splatter on the heating element and get within the evacuation fan. Both those events could change their electrical resistance, increase power draw in areas and cause hotspots that could cause a fire. It could also clog up the various vents leading to further overheating.

I guess the answer to that would be completely prevent the possibility of fat / juices escaping during the process. A regular oven bag probably wouldn't be durable enough but maybe a modified pressure cooker vessel of some form would be suitable if you didn't mind a bit of wear and tear on the drum of the dryer.

But getting back to general cooking method I wouldn't see it any different to using an oven to do the same. Results would either go from either dangerous from a food safety point of view to just nasty and overcooked on the outside, especially with something as large as a turkey.

There is a shelf-like thing some dryers have that you can attach to the back for drying shoes. The shelf doesn't move, the items on the shelf don't move, and the otherwise empty dryer revolves around it so there is warm air flowing etc. If you did this, and the turkey was sitting on a tray to collect juices that dripped from it, then I think the dryer would not be ruined. 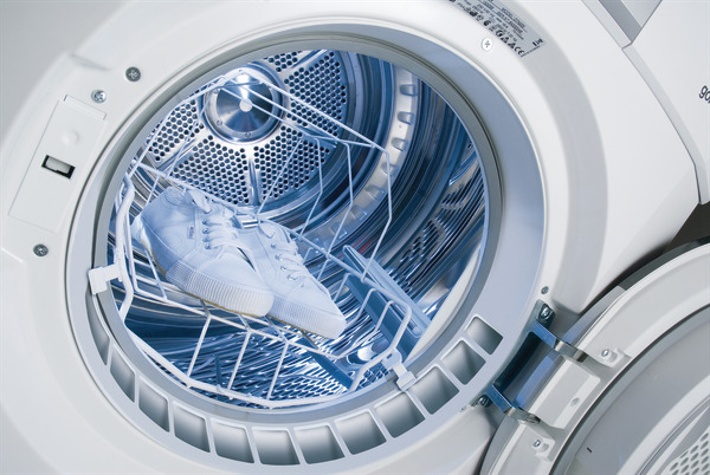 from a dryer manufacturer's site.

The turkey would be, but I think you knew that.

Yes, it is possible to thaw a turkey in the dryer. Though the process will likely render both unusable.

PeterJ's answer addresses the issues regarding organic matter getting into the guts and ducts of the dryer.

Not the answer you're looking for? Browse other questions tagged equipment meat turkey defrosting thanksgiving or ask your own question.

4
What are the options for thawing a frozen turkey?
2
Dry Brining Turkey
16
How long do you let a turkey rest after cooking?
2
What is the proper amount of time to thaw + brine a turkey simultaneously?
21
Can you eat turkey eggs?
1
Thawed Turkey Worried About Bacteria
2
Accidentally bought a "butter basted" turkey. Can/should I still brine it?