Can you prepare eggplant by salting, then baking, then finally rinsing?

In normal eggplant preparation, you salt and rinse first. However, when the eggplant is baked, it continues to release water. This leads me to believe that I could achieve a less bitter and tastier result by putting the eggplant in the oven on a rack with salt still on it, and letting the heat help drain it. Would that work?

I did the experiment complete with pictures, unfortunately I managed to to screw up the pictures, but luckily I took notes.

I started with two very similar eggplants, globe variety, Like this: 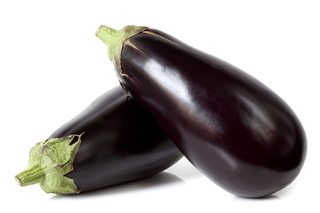 I sliced each of the eggplants into five slices of equal width, discarding the ends. I took one slice of each eggplant to make five pairs to treat differently as far as salting. I pre-salted three of the pairs and drained them for one-half hour prior to baking. One of those pairs was rinsed and dried before baking, another pair was not rinsed - just thoroughly dried with a paper towel prior to baking. The third pair was left salted for baking. The fourth pair was salted (not rinsed) just before baking. The fifth pair was left unsalted.

I baked all of the slices at 400F for 90 minutes, until they were just about done. At that point I rinsed one slice of each pair and returned all of the eggplant to the 400F oven for 10 more minutes.

I weighed each of the pairs at the beginning and end of the experiment.

After allowing the eggplant to come to "eating temperature", I invited a friend to join me in the tasting. We concurred 100% as to the palatability of each slice. Here are the results: 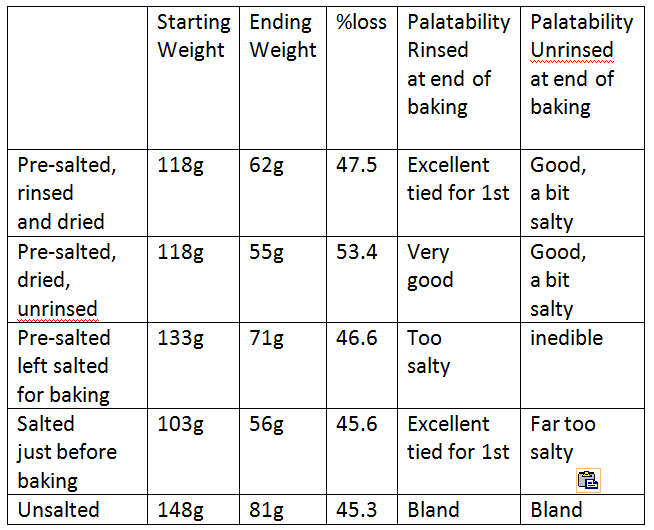 So, bottom line, at least for this variety of eggplant, pre-salting and draining is an unnecessary step, although rinsing is necessary. Rinsing can be done after pre-salting and draining, before baking, or the eggplant can be rinsed at the end of baking. The difference in weight loss is negligible. Unfortunately, I wasn't really able to gauge "bitterness", because the eggplant wasn't bitter to begin with.

Based on this experiment, if I were to bake something like an Eggplant Parmesan (unbreaded), I would salt the eggplant just before baking, rinse when the eggplant is nearly done, sauce, then continue baking until the final dish is done, cheese melted and slightly browned. As per Joe's comment below, breading would be a different ball of wax, but I would certainly consider par-baking the salted eggplant to eliminate the draining step, rinsing is really necessary either way. A few minutes in the oven after rinsing the par-baked eggplant would give you an ideal slice, ready to bread. As a matter of fact, I'm not crazy about eggplant, but my friend is. I'll update this answer in a few days with the results of modifying Eggplant Parmesan by par-baking the salted slices prior to breading instead of draining the salted eggplant then breading. I suspect the prior method will produce better results in the same amount of time with less sogginess of the breading, as the moisture loss continues during the cooking of the pre-salted and drained eggplant. For that continuation of the experiment I will make two separate casseroles, and weigh both the par-baked eggplant and salted and drained eggplant prior to breading.

Not the answer you're looking for? Browse other questions tagged baking eggplant or ask your own question.

10
Preparing eggplant with less oil
4
Can a “regular” eggplant be substituted for a chinese eggplant in a recipe?
3
What do you call the eggplant cultivar commonly found in American grocery stores?
7
Baking in gas oven does not brown the top
11
How to prevent eggplant having a tough or rubbery texture
3
How can I improve the baking of frozen cod and rice with carrots,?
4
How can I reduce the sugar in this oatmeal bar recipe?
2
How could I split the proving and baking of bread over 8 hours plus?