I roast red bell peppers all the time. I use a number of methods, but most typically I slice them in half longitudinally, roast at 450F cut side down on a foil lined sheet tray treated with non-stick spray until they are thoroughly blackened and blistered. Straight out of the oven I put them in a sealed Tupperware type container (to steam) until they are cool enough to handle, then the blackened skins come right off. Easy, and I love the results.

I'd love to do the same kind of thing with smaller, sometimes hotter peppers (jalapeno, serrano, poblano and even habanero), but my attempts have always failed. The outermost skin doesn't blister away from the "meat" of the pepper the way it does for bell peppers, and by the time the skins are blackened, the meat of the pepper is mush.

The biggest problem seems to be that the bell pepper has a thick, meaty, juicy (ready to generate steam) wall, while the other peppers do not. I can get that roasted caramelization effect easily with any pepper, but I'd like to eliminate most of the peel while maintaining some of the structure of the pepper. Does anyone know of a way to pull this off? (so to speak)

A lot of farmers markets here in the Southwest sell roasted peppers of all types. The guys roasting them at the market do so with direct application of flame (as from a blowtorch). I've tried it at home, and it seems to work pretty well. They key is to keep the flame moving (or to keep the peppers moving over the flame). The direct and very high heat of the flame combined with not letting it rest on any one spot for very long seems to effectively blister the skin without overcooking the chile.

After they've made it through the fire, the rest of your method should still work. Sometimes if they are particularly stubborn, I'll keep a small bowl of cool water to dip them in to help rinse the skins off. The water can then be strained and added to things as sort of a chile stock.

I've been slacking! Here are my (very overdue) experiment results.

The blowtorch worked like a charm for almost all of the smaller peppers. I skewered the peppers, charred the skins with the blowtorch, just holding the pepper by the skewer, then put them in a tupperware container to steam. After which, they peeled beautifully. 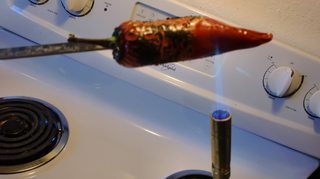 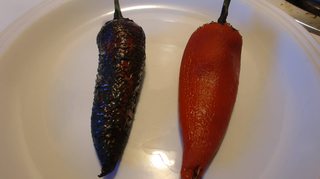 Before and after peeling. 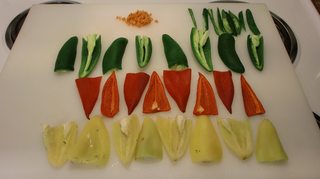 These are all roasted and peeled. Can you believe how colorful they still are?

The one pepper variety that gave me trouble with this method was the habanero. The surface is so wrinkled and the walls of the pepper are so thin, that the steaming didn't make them easy to peel. So I plumped them with salt water before charring using a needle and syringe. That worked! 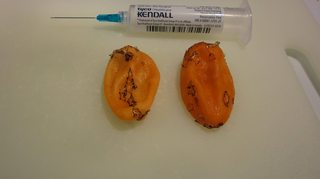 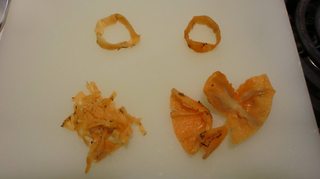 The pepper on the right was plumped before charring. Like the rest of the peppers, it maintained it's meatiness that way.

4
What are different methods of preserving chillies?
3
How can I process Hot Pepper without killing the spice (capsaicin)?

5
Should chili peppers be seared?
1
Can dried peppers get hotter with aging?
4
Do more peppers mean more heat?
6
preserving hot peppers without damaging heat
2
What kind of chili peppers are these?
4
How should I substitute jalapeño peppers for fresh green cayenne peppers?
2
What effect does removing previously-dried peppers from a sauce have?
5
Can fresh Poblano peppers be used raw?
8
Pepperoncinis vs Banana Peppers