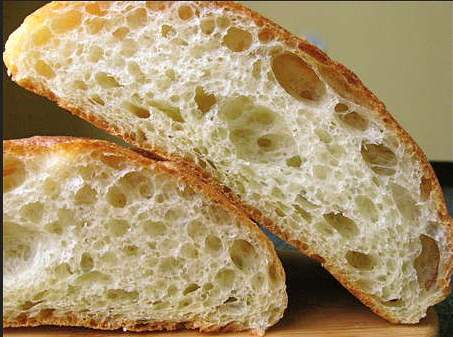 What are some techniques for making bread and/or kaiser style rolls that are very airy with large holes inside, kneaded in a bread machine then baked in an oven? I have tried a few recipes but none with the desired "holey" type.

Airiness, whether with big holes or little holes, occurs when the proof is near complete. That is, the yeast has stretched the gluten very close to its maximal length without going beyond. All other things being equal, the key to airiness is knowing when the bread has risen fully, and then to put it immediately into a very very hot oven. This applies to kaiser rolls, panned loaves, baguettes, ciabatta, pizza, artisan, sandwich, you name it (and especially shaped things like challah). It doesn't matter if you knead in a bread machine or not, though some machines will change the dough temperature, which will speed up a first rise.

So how much rise is enough rise?

Some recipes give a particular number of hours. If you aren't in possession of a temperature-controlled proving box, don't go by time. Watch the dough, not the clock. A small temperature difference between your kitchen and the one in which the recipe was developed will change the speed of fermentation dramatically. Other recipes say to do a second rise until the dough has 'doubled in bulk' but with unpanned loaves that's difficult to judge visually, short of doing something clever with water in a plastic bag...

For all my bread I use the poke test to judge how far the proof has gone: flour the surface of the dough, then sink a fingertip into the dough. You want it to have enough bounce left to still rise in the oven, but you don't want it so stretched that it's started collapsing before your eyes.

Another tip: preheat the oven if you think the bread might be nearly done proving. If it's not, the oven will wait, but a dough on its way to overproofing is inexorable!

Those big holes are typically the result of a high-hydration dough. Such doughs are generally too soft and wet to be made in a bread machine, even for mixing purposes.

A few more tidbits to amplify what SAJ14SAJ, DrRandy, and Jolenealaska said about higher hydration and longer fermentation.

Ciabatta is a good example of a high-hydration bread. It makes very good rolls also, with qualities I think you're looking for. Here's a recipe from KAF for ciabatta rolls. This looks like it's about 70% hydration (ratio by weight of water to flour), and others are higher than that. Here's another from the kitchn. They're going to be rather different than Kaiser rolls (e.g., chewier crust, very different crumb) but I prefer ciabatta :) and it might be worth a shot for you.

As for the long-fermentation strategy (e.g., ~12+ hours), if you've never tried it before, you might have to try it a few times to see what works for you (with respect to your patience and schedule, your equipment, your yeast, your kitchen, ...) Here's an example also from KAF for baguettes that uses long fermentation and sponge method (mixing a pre-ferment first, then combining with the rest of the dough). Personally, I prefer this slower-rise method in general for baking -- it takes more time, but it uses less yeast, and has (for me) better flavor and an overall more pleasant result. Instead of shaping these as baguettes, cut them smaller and shape as rolls.

Another thought that you can use with an existing recipe is to try a higher oven temperature or a baking stone. This is not going to work for all recipes, and may not be the result you're looking for, but both of these could help increase your initial "oven spring" (the initial loaf expansion soon after putting into the oven due to expanding gasses and final yeast activity) and give you bigger holes.

3
Can I rest my Ciabatta dough overnight?

16
Why does my bread collapse in my bread machine?
5
Making black bread in a microwave oven
3
Can I follow recipes for bread-machine breads without bread machine?
1
Why did my French bread neither rise nor bake properly?
11
How to make part bake baguettes and rolls?
4
Are the rolls at 'Ryans' or 'Golden Corral' a style of bread?
8
Bread from the machine always too soft, can't be buttered
3
Chewy, Moist & Bit Uncooked Bread
4
Issue getting Atta bread right
1
Baking German white bread rolls