How can I make NON-fluffy pancakes?

Every recipe I can find is for "fluffy" pancakes. I prefer thinner, slightly crispy, (very) slightly chewy, non-fluffy pancakes. Basically, the less "cake-like" the better.

Apparently I'm the only one, and these are all non-desirable qualities in a pancake, so it is hard to find recipes.

How can I make non-fluffy pancakes? I will be using a cast-iron pan.

Have you tried making Swedish Pancakes? They are between a "regular" fluffy pancake and a crepe. To make a proper crepe, you need either a crepe pan or a crepe griddle. With Swedish Pancakes, you can use a regular pan. You will find that Swedish Pancakes have a higher amount of eggs and milk. For example:

Here are the things I do to have thin and a little chewy pancakes:

My grandma made them like regular pancakes, but without the baking powder/baking soda. It works perfectly for me, too. I hate fluffy pancakes -- they don't have the same flavour. Also, a recommendation, a bit of vanilla extract added onto the batter makes a lovely scent for the pancakes.

Just add liquid. You could even make funnel cakes! (That "happened" one morning when I accidentally glugged too much oil into my skillet. The little girl I was cooking for was beyond delighted!) Same batter + a little more milk or water (prob don't use buttermilk as it activates the baking powder), just more oil in the pan, a nd drizzled through a funnel over the opening of which you hold your finger til ready to drizzle. Serve with powdered sugar & syrup. Make sure your oil is pretty hot but not smoking, or you might burn them. Now pretend you're at the county fair, and enjoy!

You can make great thinner pancakes that have supreme taste as opposed to just volume to carry the syrup.

Beyond that, the more you beat the eggs, the chewier they get (careful or you get rubber). I would back off on the milk a bit and use whole milk (milk makes the pancake burn/darken too quickly) and add a bit of fat (butter).

This way you end up with proper golden and brown pancakes with a bit of a resistance on the texture and a very distinct yumminess that disables your eating brakes.

Not a complete answer, but a few ideas thrown in.

In baking, if you add dense, hygroscopic, sticky liquids, they can make your cake heavy and dense. Try doing it with your pancakes. Instead of using a milk-based liquid, try a fruit puree, preferably one with sufficient pectin (e.g. apple mousse). If you are using baking soda and buttermilk, you will probably have to switch to baking powder because you will be missing acidity. I don't know how much you need, it might turn out that you don't need leavening at all for your intended thickness.

Another thing to change would be the flour. Try using bread flour or whole flours to get less rise and fluffiness and some chewiness.

Increasing the sugar will probably help with both density and crispiness on the outside. You probably can't go up to chewy cookie amounts though.

Stay away from recipes which involve creaming a solid fat. Creaming plays a big part in leavening. Use recipes with either oils or melted solid fats.

You can also try increasing the ratio of eggs in the recipe. Eggs are the best glue in your kitchen. Also don't foam them in any way. You want to stir them a bit until they are liquid and the egg whites have broken up, but not to beat air into them. There is a reason why in Ruhlman's Ratio, the crepe recipe has 2/5 parts egg and the pancake recipe has 1/11 part egg, or four times less.

I haven't tested any of those, it might turn out that they don't work.

My wife's family makes "cinnamon omelettes" that are probably exactly like what you want. The recipe is 1/2 cup flour, 1/2 cup milk, and one egg. Spritz some spray-oil on a frying pan and pour in the batter. Cook over medium heat until the edges are firm, and flip the whole thing over. Let the other side cook for a couple minutes, slide it onto a plate and sprinkle with cinnamon-sugar.

Here in Argentina, we usually eat our pancakes thin, so we can spread dulce de leche on them and roll them like a burrito.

I sometimes do them like that, or do the classic thick, disc-like pancakes that everyone does when I feel like it.

The only difference between the two is: if you want thinner pancakes, lose the baking powder and let the mix rest for about 10 minutes (or more) after you're done mixing. The mix should be a bit runnier than a normal pancake mix, so it's easier to spread it in the pan.

Its easy just replace 2/3 of the water with buttermilk. Blend until smooth. when pouring batter into the pan pick up the pan and tilt it from side to side thinning batter to desired thickness. It's the only way I will eat them!

Whisk or blitz together with a stick blender until smooth. Allow to rest at room temperature for an hour (refrigerate if you need it to sit for longer).

To cook, generously butter a pan over medium-high heat until the butter stop sizzling. Lower the heat to medium and put in enough batter to thinly coat the pan. Leave undisturbed for about 90 seconds then flip with a spatula. Cook for a further 60 seconds. Shake the crêpe out onto a plate. Repeat until done. After every third pancake, the pan will probably be too hot to cook the crêpes well. Drop a tablespoon of cold water in to lower the pan's temperature and allow the water to boil away. Continue as before.

These can be kept warm in a low-temp oven separated by greaseproof paper until the whole batch is done. Alternatively, separate them with greaseproof paper, plastic wrap when cool and refrigerate them for up to 48 hours. Reheat wrapped in foil in a medium-hot oven for 20 minutes.

It may be possible that the OP just wants less fluffy pancakes.

Follow these three steps to flatten almost any pancake recipe:

Replace flour with "cake flour" or "pastry flour." These have less gluten and will therefore take a longer beating without getting tough.

Add 10% more milk. This is usually no more than 1-2 tbsp for most recipes.

Beat the batter with a wire whisk until smooth. There should be little to no lumps in the batter.

Dilute, and raise less. I rather like a "bread pancake" which is simply frying up some of my yeast bread starter/sponge - flour, water, yeast - adjust liquid to get the thickness you like. No eggs, but you could use eggs while diluting more if that makes what you are after. The sourdough ones can be especially different from a normal pancake.

I do these for my breakfast rolls. I make a pancake but it is somewhere between a pancake and a burrito. The key isn't the mix (although skip baking powder/soda and a little less flour and maybe a little more salt) but it is the cooking technique.

You will have to lower the heat. My pancakes cook around 220F and my pancake rolls go at about 180F. The second thing is you need a "crepe squeegee". As soon as your mix hits the griddle you need to spread it out.

From there it is up to you. If you want them really crispy then you can flip them a few times or add oil. Mine are done with no butter or oil - healthy bunch - so I have to flip them a couple times to get them a little crispy (you don't flip then they burn more than crisp). 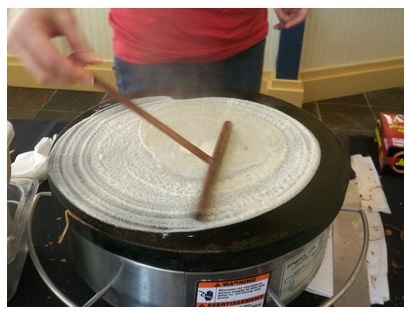 I like thin pancakes as well, not talking about crepes even though those are amazing.

All I use for thin pancakes is:

Best to ignore the culinary techniques of most recipes, which are meant to increase the pancakes light and fluffy nature.

Each cake, when removed from the pan, gets treated with parified butter, as it sits on the serving plate, waiting for the next pancake to cover it.

I make a standard pancake recipe, but make the batter somewhat thicker. As bubbles rise to the surface, I carefully flip the thick pancake over and give it another minute until just before it's done. Quickly and carefully, transfer the slightly raw pancake to your plate and submerge in syrup. Man, it just don't get any heavier than that. I usually wait until my wife and kids are out of the house so I don't get the :...yer gonna git the salmonella!"

Similar to @Kevin Nowaczyk's "cinnamon omelettes," my family has a recipe that we call "Bumples" (I have no idea where the name comes from - I've Googled it with no success). It's simply 1.5 cups flour, 1.5 cups milk, and two eggs, all mixed together, then cooked in your choice of oil (I've used both vegetable/canola oil and coconut oil). We typically cook it all as a single cake, then cut it into smaller pieces in the pan when almost done cooking - but you could certainly cook it as smaller pancake-sized cakes. When done cooking, we roll it in sugar to sweeten. It's a very versatile recipe; we've made it with whole wheat flour, with half almond and half whole wheat, with cinnamon sugar instead of plain sugar, with a little cocoa powder mixed into the batter, etc. It's a little denser than a regular pancake because of the lack of leavening.

Whatever recipe you used before, use a little more liquid, which will make for thinner pancakes. You probably won't need baking soda/powder, yeast, or any other leavening. Add more fat to the pan--basically, you're almost frying them. I personally think butter tastes best; it makes for crispy edges and they'll cook fairly fast since they're thin. If you don't get nice brown crispy edges, you probably need more fat and more heat.

Snackery pancake mix...chewy, but I am looking for their recipe.

Not the answer you're looking for? Browse other questions tagged frying pancakes or ask your own question.

9
How many different varieties of 'pancake' are there?
10
How can I get thinner pancakes?
3
Why do my pancakes fizz?