I am from Scandinavia, and I am currently living in North-America. I am having problems finding this species of fish, usually referred to as Arctic Char. It is closely related to salmon and trout. Is it farmed in North-America at all?

According to the article, a subspecies is known as blueback trout but was extirpated. Does this species survive in the waters here at all? Can it be bought fresh?

I think this species of fish if referred to under a different name in the US.

My first reaction was to be surprised by your question as Arctic Char is fairly common in Alaska, I didn't realize that it is hard to find in the lower 48. 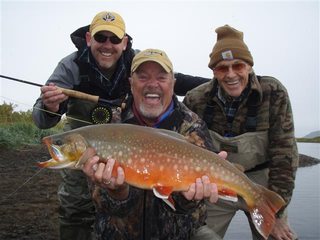 It's closely related to salmon, so salmon would be a reasonable substitute for most applications.

This article tells more of its range in the wild (far north) Arctic Char. It is farmed in the US Farmed Arctic Char but not in huge numbers. I'm not aware of it being known by any other name.

First, it doesn't go by another name in Canada (in English, anyway, it has an Inuktitut name.) I see it regularly on menus and in grocery stores in small Ontario cities. Not a hard fish to find at all. There are also fishing expeditions to catch your own. The Canadian Department of Fisheries and Oceans says:

Arctic char are a highly priced delicacy, marketed mainly fresh and frozen as whole-dressed fish and steaks. A small quantity is also processed into value–added products including smoked char and jerky.

It is also farmed in Canada and the farmed product is considered sustainable.

You didn't say what city you're in, but if it's large enough to have a fishmonger I suspect a phone call will be all it takes to find out if some is in stock. If not, call a few grocery stores.

In N America you would need go some place like.Humphries Market. Small market that does handle imported fish, elk, buffalo & such. Then order them from them frozen.

I live in Farmington, Michigan. Last summer, 2017, we found Arctic char regularly at our local grocery; but this summer, we can't find it anywhere.

Not the answer you're looking for? Browse other questions tagged fish or ask your own question.

2
What north atlantic fish can we use to make a good ceviche?
2
Flavor profiles of Steelhead Trout versus Artic Char