Is there a downside to tenderizing meat?

I'm specifically asking about manual or mechanical tenderization prior to cooking, as with a meat tenderizer (also called a mallet). Wikipedia says

Tenderizing meat with the mallet softens the fibers, making the meat easier to chew, and easier to digest. It is useful when preparing particularly tough cuts of steak, and works well when broiling or frying the meat.

This makes pounding or mashing meat sound like a magic bullet that can never go wrong. I've learned the hard way that there is no such thing in a kitchen: a sufficiently inventive cook (such as yours truly) can find a way to ruin any recipe.

I recently purchased a steak from a meat counter, and the butcher offered to run it through their tenderizer. I imagined a machine equivalent to a robotic hammer array and agreed. However, I was surprised to find when I opened the package at home that the machine had actually cut a large number of closely spaced striations part way through the steak.

How does this differ from a pounding tenderization process? Is there a guide to which types of meat work better with which types of tenderization? Are there some cuts or species of meat that don't respond well to tenderizing? What are the pitfalls when using either process? Can you over-pound or over-slice a cut of meat and damage it or cause it to toughen? Does manual tenderizing conflict with other types of tenderization (e.g. brasing, enzymatic, brining, marinating etc.)?

Right now, the only downside to manual tenderizing that I can think of is the time and effort required to pound it out. I've been meaning to pick up a meat mallet and wanting to go nuts experimenting, but I'm hoping to avoid any mistakes.

Almost any cut of meat can be pounded--very thin steaks commonly called cutlets or scallopini are made from tender cuts being pounded thin. This is most often done with chicken or pork, but you will also find, for example, medallions of beef tenderloin pounded to get them into a uniform shape and size.

Obviously, this is work to do, and changes the shape (and thus the cooking properties) of the cut involved, but does not really have a negative effect.

Your butcher did not pound the meat. Instead, he ran it through a commercial version of a jacquard meat tenderizer. The home version looks like this, with many small pointy blades or needles to penetrate the meat: 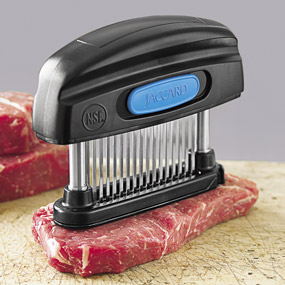 They are used to create many, many small cuts in the meat, physically severing the connective tissue and making it more tender. The most frequent home use is to make cube steakl; they are also often employed in making chicken fried steak.

The many small holes may also help the steak absorb some seasoning from a marinade.

Tender cuts like chicken breasts, beef filet, pork loin, and so on don't need any tenderization. THey may be pounded to reshape them, but there is no real requirement.

Tough cuts, typically beef, may be physically pounded or subjected to the tender mercies of the jacquard tenderizer in order to render them easier to eat and more succulent when they are being used for a rapid cooking method like chicken fried steak. If they are being used in a low and slow method, like braising or barbecuing, there is no point and the many small holes would be a detriment as they would allow more moisture to be expressed.

Can you over-pound or over-slice a cut of meat and damage it or cause it to toughen?

Yes, eventually you will reduce it to shreds, or make to thin and unattractive.

Firstly, neither brining nor marinating tenderize, ever, unless there is acid or an active enzymatic ingredient in the marinade to do it.

Braising (and other low and slow methods) work by converting the connective tissue protein collagen into gelatin, thus making the cut succulent and tender, despite being very well done. IF you are going to do this, there simply is no point in mechanical tenderization.

Enzymatic tenderization works by denaturing the proteins in the meat, and if over done will turn them to mush. It also works only at the surface, unless left long enough to penetrate--but then the surface will mushy. Using a jacquard might be helpful in getting an enzymatic marindate to penetrate and act on some of the interior of the cut, but I personally do not like the outcome from enzymatic treatments, and never use them.

Not the answer you're looking for? Browse other questions tagged meat raw-meat tenderizing or ask your own question.

64
Is there a problem with defrosting meat on the counter?
11
What types of meat should I pound and why?
15
Does milk tenderize meat?
8
Why did my roast beef turn out chewy and not tender? Where did I go wrong?
3
Using liquid nitrogen for tenderizing octopus?
3
How should I prepare meat to be ground?
2
Chemical meat tenderizers
2
Tenderizing fava bean skin without overcooking inside
0
Tenderizing vegetables (chili pepper)