What is the substitute for pastry blender in cookie making?

I'm going to do this recipe and it says in the recipe that I need to use pastry blender. I have a question that can I use this one instead of pastry blender? Or this one

No, the device called for, a pastry blender, is not what you have linked in either picture.

The first is a simple hand mixer with standard beaters. The second is the paddle attachment for a stand mixer.

A pastry blender is used to cut butter into flour and looks something like this: 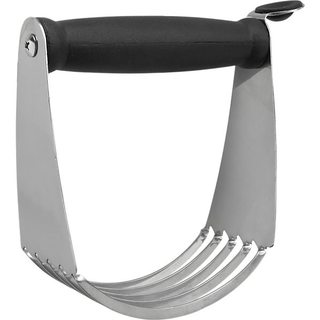 (Image from crate and barrel)

It is used to cut butter into flour, while leaving it in relatively large solid chunks.

If you don't have a pastry blender, alternatives include:

This video from Dear Martini Kitchen has an excellent demonstration of the pastry blender method that clearly shows the desired texture, an inset which shows the two-knife technique, and at the end a brief food processor demo.

Not the answer you're looking for? Browse other questions tagged cookies or ask your own question.