Preheat the Dutch oven (and the oven itself) for No-Knead Bread?

I'm trying the America's Test Kitchen tweak of No-Knead Bread. The video segment on the website conflicts with the attached written recipe (sorry, paywalled). The video clearly says to preheat the oven and the Dutch oven before slipping the dough into the hot Dutch oven and baking it. The written recipe says to allow the second rise to happen in the Dutch oven and to place both in a cold oven, then turn the oven on to 425F (218C). Other places on the website say that the written information is kept up-to-date and supersedes any video segment, but oddly, it doesn't address the conflict in this recipe. I'll call ATK in the morning for clarification, but does anyone here have any experience that could shed some light on the subject? As a rule, should the Dutch oven for No-Knead Bread be preheated? Does it make sense to start baking the bread in a cold oven?

I did not get an answer from America's Test Kitchen beyond that the written recipe supersedes the video, so I proceeded with the experiment. I made two identical doughs following ATK's recipe for Almost No-Knead Bread with Olives, Rosemary, and Parmesan. Knowing that I would bake them two hours apart, I even started the doughs two hours apart, so the two doughs were truly identical in every way possible. They were both allowed 18 hours for the first rise and 2 hours for the second.

For the first loaf I followed the written instructions for baking. I did not preheat the oven or the Dutch oven. When I put the loaf in, I turned the oven to 425F (219C). One half hour later I removed the lid and continued to bake until the dough registered 210F (99C), which took about another 35 minutes.

For the second loaf, I followed the instructions in the video. I preheated the oven and the Dutch oven to 500F (260C), put the ball of dough in the Dutch oven, returned it to the oven and immediately reduced the oven temperature to 425F (218C). It baked covered for one half hour, then baked uncovered until it registered 210F (99C), which took about another 25 minutes. 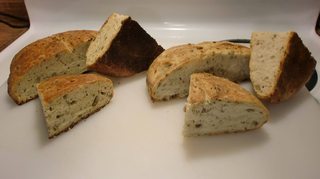 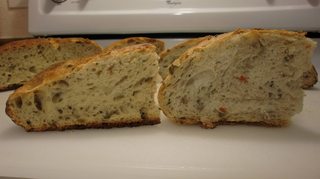 I didn't think starting the bread in a cold Dutch oven made any sense, this experiment clinches it for me. If you're going to bake bread in a Dutch oven, I recommend that you pre-heat it.

Guys: As someone who works at Cook's Illustrated should know, one experiment does not make a data set. I was the one who updated our No-Knead recipe, and I can tell you with certainty that the cold Dutch oven/cold start method works just as well as the hot one. I do it all the time. As does Chad Robertson, so it would appear.

Here's the deal: oven spring can happen fast or it can happen slow. It is crust formation that needs high heat, not spring. So long as the cover is on during the "spring" stage (trapping steam to prevent crust hardening), it works either way. The cold start method is "better" only because it is easier/more convenient. I'm not sure what went wrong in the experiment illustrated, but I can tell you that my loaves come out beautifully every time I use it.

I always preheat the oven and Dutch oven for my no-knead bread, but I recently saw this video where Chad Robertson of Tartine skipped preheating the Dutch oven.

So, it is definitely possible to skip preheating the Dutch oven. Unfortunately, I don't have more experience or evidence around this topic and don't know the effect of skipping the preheat on the oven. I'm interested to hear what you discover.

6
Dutch oven bread - bottom always burns
6
Can I substitute a stainless steel pot for the traditional iron dutch oven?
2
Why do you warm a Dutch oven up before baking bread?
2
Should I preheat my bread baking containers?

3
Can I rest my Ciabatta dough overnight?
7
Bread has tough, crunchy crust but is underbaked in the middle - how to fix?
7
How do different techniques impact sourdough bread?
3
How to adjust baking time if I adjust the quantities in the recipe?
1
How do I follow a recipe if my oven doesn't go as high as the recipe states?
1
Baking Bread in a Dutch Oven
5
Bread is not rising
0
Does bread flour (vs AP flour) make a big difference in the density of the dough?
0
Why is my bread dough rising this quickly?
1
Dutch oven vs. water pan for bread baking