Can I rest my Ciabatta dough overnight?

I'm making Ciabatta for the first time Recipe (sorry, paywalled). My biga is fermenting as I type this, I'll mix the dough tomorrow. By then the biga will have had about a 16 hour ferment.

The dough will be difficult to handle. It's 80% hydration, and is described by America's Test Kitchen as being nearly pourable. The recipe calls for a mechanical mix and first knead, then two folding treatments* before baking. The folding is done with an oiled spatula, so I don't even need to touch the dough with my hands until it's time to shape the loaves. The shaping is shown in the video on the website (the paywalled link above) and it looks like it is going to be challenging.

My experience with wet, difficult doughs is that they are much easier to deal with if allowed to rest in the refrigerator overnight, before the dough gets any time to rise. Since ciabatta dough is so wet, it seems a natural to me that an overnight rest would be a good idea but neither the recipe that I'm using, nor the dozen or so others I looked at mention a rest.

Is there something about ciabatta that makes is not a candidate for resting overnight?

I'm hoping for a nice chewy texture and a lot of holes in the crumb, like this: 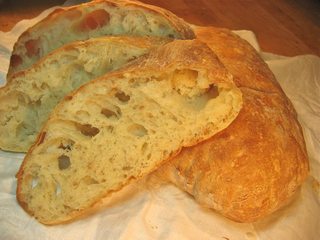 I'll check answers and comments here before I commit, but since the recipe I'm using makes two loaves, I'm considering an experiment of doing one loaf as instructed by the recipe and allowing the other to rest in the refrigerator for 24 hours just after the first knead.

Resting it in the fridge overnight ought to be absolutely fine, I've found that in general I get better flavor from a slower rise. I'm not sure that refrigeration is going to help with this folding technique though, it's going to make the dough less sticky yes, but it will also make it less flexible.

With cold dough I'd oil a work surface and my hands and gently stretch it and fold it that way. I think the goal of the folding technique is to avoid handling it too much and knocking the air out of it, and this may work as well. I use this method for focaccia, which is also very sticky, although I only fold it to get flavored ingredients into it.

Let us know how it goes.

I did the experiment and the results were surprising. Based just on this one test, at this point I can't recommend a long refrigeration of ciabatta dough. I baked one loaf according to the recipe and I put the other loaf in the refrigerator just after the mix and mechanical knead (I used a bread machine up to that point). I let it rest for 24 hours. The loaf on the left of the following pictures was done according to ATK's instructions, the loaf on the right spent 24 hours in the refrigerator. 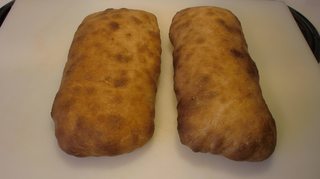 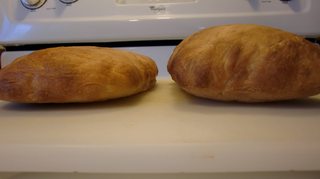 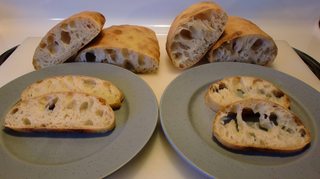 GdD is absolutely right, the refrigerated dough did not lend itself to the spatula method of folding, so I approximated it as well as I could using my hands. A bit of Pam (vegetable oil spray) was all I needed to keep the dough from sticking to my hands. For the second fold, the dough had loosened enough that I could use a spatula. When it came to shape the loaf, it handled very easily. I was able to use very little flour and I was encouraged by the bubbles already visible in the loaf. 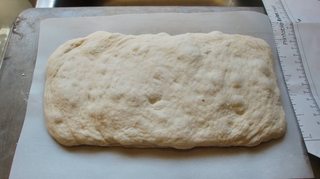 But as you can see in the final loaf, those air bubbles were actually too aggressive. The good news is that the taste of the loaf is just fine. As a matter of fact, with closed eyes, the two loaves are indistinguishable. They're both very tasty with a chewy crumb, a crisp crust and a subtle sourdoughish tang.

The dough that had been refrigerated was easier to handle. While the 24 hour rest did cause the loaf to rise too aggressively, the first loaf could perhaps have benefited from a bit of that aggression.

So, next time I make this recipe (which will be soon because it's very tasty) I'll experiment with shorter refrigeration time. Perhaps 5 hours for the first loaf and 10 for the other.

Finally, I'd like to comment on the America's Test Kitchen website. I was decidedly outside of my comfort zone working with a dough so wet, and the wetness of the dough is a big part of what makes ciabatta, ciabatta. I was expecting the shaping of the first (non-refrigerated) dough to be a nightmare. Well, it really wasn't. By following along with the video, every fussy little step, the process was broken down and manageable. This is where ATK excels. If you could use a confidence boost in any aspect of home-style cooking, I recommend checking out their 14 day free trial, you can gain a lot of knowledge in 14 days. Just from this recipe and video alone, I am significantly more confident today in my artisan bread making ability than I was a week ago.

9
How does halving a bread recipe impact rising time?
4
Long chilling of brioche dough?
2
My ciabatta dough hasn't risen after 2 hours!
0
Making bread on Stand Mixer
4
How do I knead this dough by hand?
2
How can I cover an egg-washed dough?
0
Sourdough dough collapsed, not rising again… Need help!
2
Overworking bread dough by hand