I've always been told that if you see air bubbles in canned food, you should treat it like toxic waste. Today I opened a can of tomatoes and saw a few air bubbles form along the edges of the can. Is this what I was warned about? Or are they talking about food that looks like it's fizzing or oozing out of the can?

Here's a picture. There were ~2-3x that many bubbles when I first opened the can. 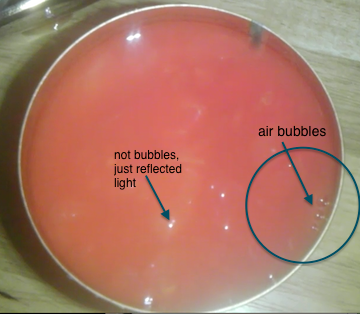 It's a realative thing. What you're trying to determine is: where these gas bubbles generated out of something inside liquid portion of the can?

The reason that can be hard to determine is that many cans have a little air trapped in them. If the can has been agitated at all (doesn't need to be extensively), then you can get what look like bubbles coming from the tomatoes themselves, and it can be pretty hard to tell.

I generally look at it from a quantity/location standpoint: are the bubbles throughout the liquid, or are there only a few along one edge? In the end though, with tomatoes, I'd do what SAJ said. While they're probably OK, the penalty if they're not is pretty darned severe, and canned tomatoes are cheap.

I don't think many of us have actually seen bad canned tomatoes. It is exceedingly rare.

The risk versus reward ratio to save a bit of tomato which is not very expensive just isn't worth it.

Not the answer you're looking for? Browse other questions tagged food-safety tomatoes botulism or ask your own question.

1
Canned cubed tomatoes vs crushed
1
Substituting Diced Canned Tomatoes for Fresh
4
Are my pickled peppers safe to eat?
7
Using Canned San Marzano Tomatoes Vs. Regular Canned Tomatoes
18
My applesauce has fermented, is it safe to bake with?
18
How risky is it to eat raw flour, as in uncooked dough?
8
Air bubbles in sausage
5
Imported Italian canned tomatoes vs. American tomatoes