I see in many recipes with beef meat concrete part of the cow in the ingredients. I'm always wondering, what would happen if I put the meat I actually have and not the exact one. Is it that different?

These are the parts of beef: neck, brisket, chuck, rib, sirloin, tenderloin, flank, shankle, round. Are any of them interchangeable, so it is safe to replace one type of meat with another? Are there any general on-this-site-explainable modifications, that need to be applied when using different kind of meat?

There is one major aspect that controls what type of cooking properties an individual cut of beef has: the amount of connective tissue. This is what groups the various cuts into two basic categories:

Slow cooking cuts have a lot of connective tissue, which means they are tough but flavorful.

As a general rule (there are exceptions), they benefit from slow cooking techniques which provide the time (usually several hours or more) for the connective proteins in the meat (collagen) to break down and be hydrated into gelatin, rendering them sumptuous and delicious.

Historically, these were often the cheaper cuts including shank, ribs, chuck, brisket and tail.

As a general rule, they benefit from fast, high heat cooking methods which develop flavor on the surface through browning, but leave the interior rare to medium rare, thus retaining tenderness.

These were the more expensive cuts including the surloin, tenderloin, and center cut steaks.

Typical cooking methods include sauteeing, griddling, pan frying, sauteeing and so on.

There is one small group of outiers, the fast cooking tougher cuts, including flank, skirt, and "london broil." Today, these are extremely popular for fajitas, at least in the US.

These cuts have high flavor, and very distinct banding or grain, but little fat.

If they are cooked rapidly, and cut against the grain, they can be served medium-rare to medium and have a lot of flavor without being overly tough although they will never be as delicate as some of the true fast cooking cuts.

You will see that the general characterization butchers often use is that the steak is more tender the farther you get from the hoof or the horn.

This is because muscles the animal used heavily (like its neck and shoulder muscles to hold its own weight up and walk around, or its tail constantly flicking) have a great deal of connective tissue and become tougher.

Less used muscles such the tenderloins along the spine stay tender.

In this diagram (from Wikipedia): 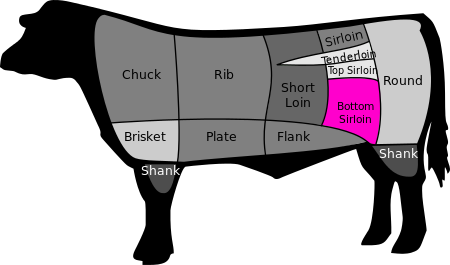 In general, you can exchange cuts from the same group with a relatively good degree of success.

So using a rib eye steak instead of a tenderloin for fast grilling will be quite successful; using a chuck instead of a shank for stew will have a good outcome. But trying to change a filet for a shank will not.

Cooking method and presentation do have a important role to play.

Some tougher cuts can be tenderized mechanically (by beating them with a meat mallet, or using a tenederizer that creates many small cuts). This is typical of the so-called cube steak or swiss steak. At the extreme end, these cuts can be ground for very flavorful sausage or hamburger.

Another example is the round, which is often good for roasting, if sliced thinly across the grain which helps maximize the tenderness.

So to substitute one cut for another, you want to select one from the same basic category, and cut to approximately the same thickness (for your application).

Not the answer you're looking for? Browse other questions tagged beef or ask your own question.

9
What makes a moist steak (or roast)?
4
How to reproduce beef flavor & texture

17
Fat contents from different types of ground beef when drained
3
How do I get pepper to stick to my beef jerky?
3
Can I use short rib bones alone to make beef stock?
12
How to fix grass finished beef that tastes like fish?
1
Are long brines neccesary for sous vide?
4
How to reproduce beef flavor & texture
25
How can I get cuts of beef I recognize when in Italy