What are the grey-black specks that appear when whipping cream in stainless steel bowl?

When we whip cream by hand in a stainless steel bowl, with a metal whisk, small grey specks, ~0.5-1mm in size, appear in the cream. The specks are squishy and can easily be smeared out. See attached photos: 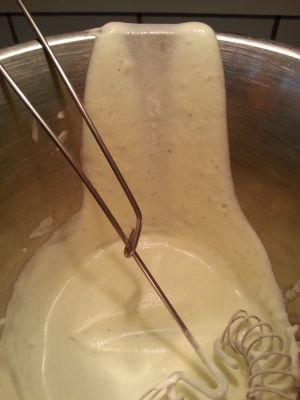 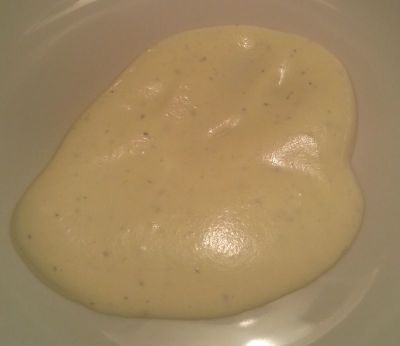 Googling does not turn up much except similar question at: http://chowhound.chow.com/topics/508107

The specks appear in different stainless steel bowls ("Stainless steel" imprinted on all bowls - no aluminium or other metals involved as far as we can tell).

The same whisk used in a plastic bowl does not produce specks.

It seems probable that the specks come from mechanical wear. But what is it? What could be the cause? Is there something we should know about Stainless steel bowls?

Those look like air pockets - you're using an unusual whisk, perhaps it can't get enough "bite" on the stainless steel bowl to pop them, whereas the plastic bowl's texture offers enough resistance. I'd try it with a balloon whisk rather than a spiral whisk, and see if that helps. Here's a breakdown on whisks and their uses from Craftsy.

We just experienced the same phenomenon, and we were able to confirm that the specks were NOT bubbles - if we were careful enough, we could isolate the flecks. They came in different shapes - some were specks, but some were almost filaments.

We have a stainless steel bowl, but we suspect the whisk was aluminum.
Since aluminum is Mohs hardness 2-2.9 and stainless steel is 5.5-6.3, it's quite likely that the aluminum whisk was leaving residue on the side of the bowl that was ending up in the whipped cream.

We are avoiding aluminum utensils anyway, so now we will purchase a stainless steel whisk and see if the flecks still occur.

I think the way to avoid flecks is to not use metal with metal, but instead use the whisk in a bamboo/plastic bowl.

It is from the wisk. If you do careful inspection at the top of the wisk you will see rust and black when you move the wires around. I just had to throw out my entire pie. I used two separate metal whips one was used in glass the other was used in a metal bowl. Both had flakes. Buy a coated whisk

What my wife and I have worked out is that it appears to be a result of the beaters causing too much friction against the metallic bowl and either burning the cream or causing the metal of the beaters to wear off.

We noticed that the flecks are slightly metallic in nature - they give off a slight shine in the light.

Furthermore, the volume of flecks appear to increase over time. When we poured the cream into the bowl we didn't see anything at first, and there was nothing in the cream container. It was only after mixing it for a while with an electric mixer that it would start showing up.

We also noticed that it only happened when we would tilt the bowl to one side and let the beaters move the cream, rather than moving the beaters around the bowl.

We also noticed that the beaters we have with this mixer (which we bought in the summer of 2021) have tiny studs at the point where the wings(?) meet rather that being flat; it might be these studs that are causing the friction against the metal bowl.

We're going to see if we can find better beaters for our mixer, and in future will make sure we move the beaters around the bowl to avoid too much friction in one area.

I believe the whipped cream is collecting dust particles from the fridge, my first concern was that it was mold, but I know my cream was fresh. It sat in my fridge for an hour while we ate. It's odd that the sizes of these flecks are different. Maybe I'll try a silicone wisk next time :(

Not the answer you're looking for? Browse other questions tagged food-safety chemistry whipped-cream stainless-steel or ask your own question.