I am looking for a convenient office/portable tea making/drinking system. Ideally the device should be portable and very easy to clean in an office setting and still extract the same quality of flavor that a traditional teapot would, but also be sturdy. Hence the following requirements

Preferably, no plastic or rubber touching the hot water. However, given the somewhat recent advances in plastic, this may be an irrational fear - in which case it would be nice to link to a relevant thread/article easing "plastic touching boiling water concerns" if recommending a style of product that is only available in plastic.

The only device I ever found that meets (1-4) is the quick gongfu style (a tea pot with holes in the spout area, where the drinking cup is the lid). But unfortunately it is fragile (not meeting requirement 5). Here are pictures of the device in various materials (from left to right clay, porcelain, ceramic, ceramic)

and ones that satisfy (2-5) but not (1), for example the double wall glass/plastic travel brewers (note some glass products are quite strong) 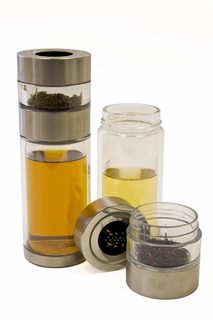 But is there a device that satisfies all 5 desirable qualities in an office tea drinking/making system?

Note: This is not a product recommendation question. This question is about styles, types and materials, not specific products or brands.

Are you overthinking this? A small teapot, sized for one person, would meet your criteria, wouldn't it? Unless you count the infusion basket separate from the teapot itself, you just have a teapot to rinse out (no scrubbing needed) and a mug to wash. 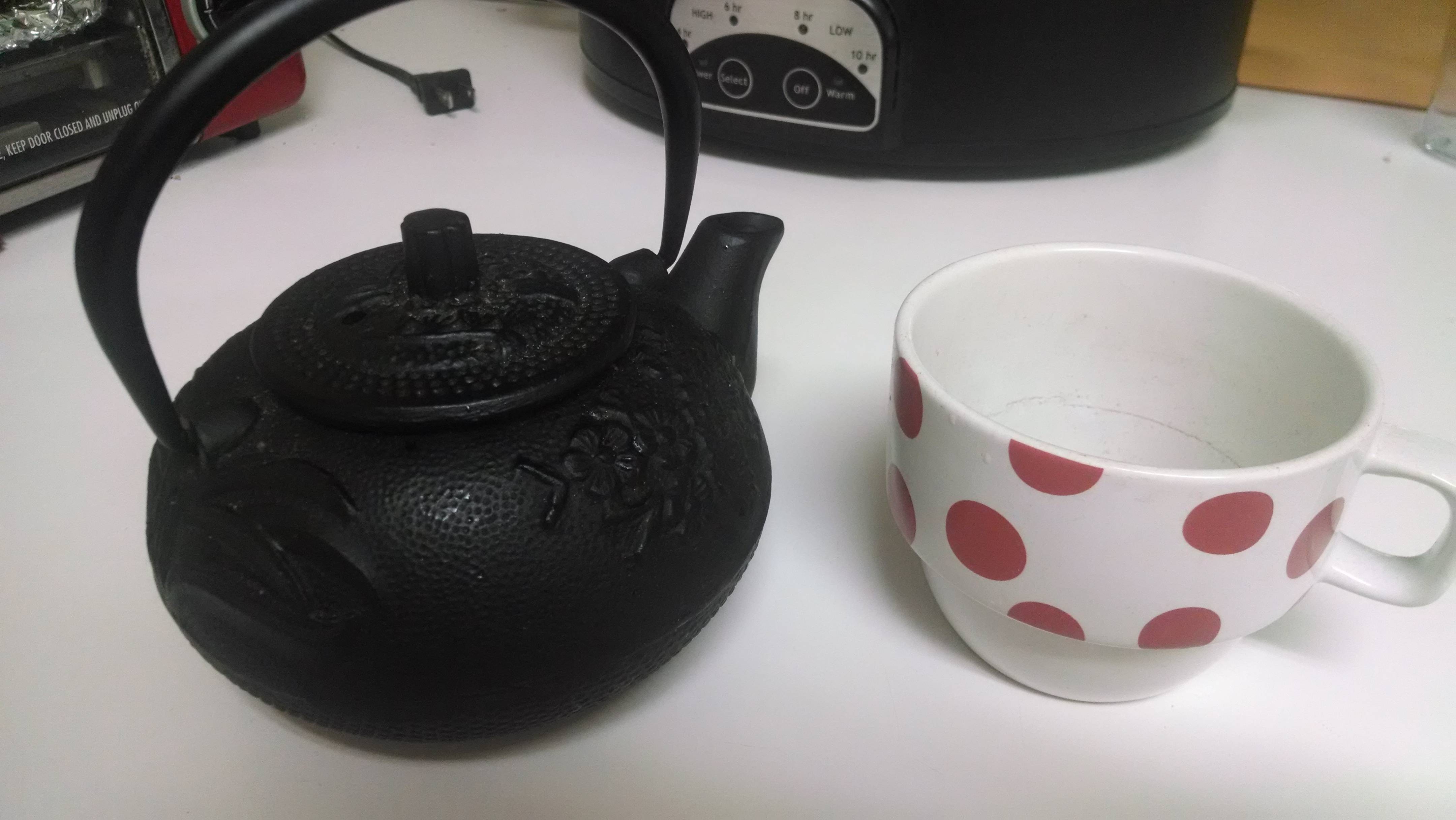 It holds around 20oz of water, so I can fill the pot, steep for a few minutes, then lift out the infuser basket and dump the leaves. You can easily do this in a breakroom or kitchenette area of an office, and then take the teapot back to your desk and voila, 3-4 cups of tea with one trip to the breakroom. Mine's made of cast iron and easily keeps the tea warm longer than it takes me to drink it. When you're all done, rinse out the teapot (cast iron won't need much more than a brief rinse) and wash your mug in the sink.

Based on my tea this afternoon (admittedly, taken in my home office today rather than at work):

If you are asking which one of the four you listed will be sturdiest, I think that there is no way to answer your question.

All four pots you listed are made of ceramics. "Ceramics" is a broad class of materials, it covers all earthenware (clay) materials, all porcelain, and the synthetic stone in your four example. (It also covers many more materials not used for food containers). Practically all ceramics in the kitchen have some chance of breaking when you drop them from one foot height. It is more than zero and less than 100%. But for each specific ceramic, only the manufacturer (or somebody with access to the relevant parameters and the knowledge to interpret them) can tell you exactly how prone it is to breakage.

People with experience working in ceramics may give you a good guess once they have held the object in their hand. But I don't think anybody can tell from a picture. And each of the names you give (such as "porcelain") covers a large range of materials with very different chance to break. And because the chance of breakage depends not just on material but also on the exact three dimensional shape (how thick it is, what shape are its curves, etc.), nobody can give you a statement saying "porcelain is always easier to break than purple clay" - there is too much variety in break proneness both within porcelain teapots and within clay teapots.

If you want a truly unbreakable pot, you will have to choose some other material. But ceramics are traditional for oriental teapots, so I can't promise you that this style exists in another material at all. If you have to choose a ceramic one, there is no way to predict which one will survive the most drops, but each will break if dropped often.

Update: The device I mentioned as measured by the new points in the question:

It was similar to the ones you call "travel brewers". I think that it has three parts to clean: the cup, the cover and the filter "basket" (like a plastic cup with holes). When assembled, it resembles a sippy cup with a closable valve, and the basket extends from below the cover down into the liquid. It is assembled both during steeping and drinking, although I guess you could open it for drinking and use it as an extralarge cup; then you'd be losing the thermos effect and you'd have as much of a spillage risk as a normal cup (closed, it would leak only a little if it falls over). I think you had to drink some of the tea before the level falls below the basket bottom and the leaves stop steeping; it is possible that the tea still flowed once through the filter when you tilt it for drinking, I am not sure about that part. It was double-wall plastic, and became quite warm, but didn't burn your hands. I don't have it here, and have no idea where it was bought from or how it is called, so I can't make or find a picture. I think it is just a version of a travel brewer.

Stainless steel. They won't won't break or shatter, and some can be quite pretty. 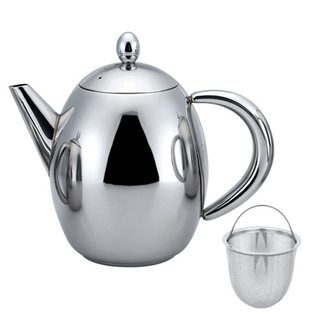 Not the answer you're looking for? Browse other questions tagged equipment tea presentation or ask your own question.

26
Induction range vs gas
8
Induction unit makes buzzing sound
6
Office (Loose Leaf) Tea Solution
6
Why have all of my quality pans started smoking at once?
6
Black tea develops cloudy dregs; how to avoid?
6
Can alcohol extraction be used to draw more of the spice flavors out in chai tea concentrate?
0
Method to brew a large batch of iced tea without steeping in a plastic container