How to cleanly slice hard-boiled eggs?

After some furious brainstorming in The Frying Pan, I recently prepared some hors d'oeuvres for a group of friends. These snacks were meant to include a thinly sliced boiled egg element. Unfortunately I found that I did not have a technique that reliably produced egg slices at my desired thickness.

I boiled the eggs and placed them in an ice bath. I shelled them and placed them, one at a time, on my cutting board (leaving the remaining eggs in the ice bath.) I was hoping the time in the bath--about 15 minutes--would be enough to firm the eggs to aid in slicing.

I drew a sharp, honed blade (6" chef's knife that I use for pretty much all of my prep) across the egg and essentially tried to freehand it. The results were tasty and they were fine for my friends but I would have really liked them to be more uniform.

I did try wiping my blade between slices and this helped a little, but the biggest problem I was having was the change in consistency between the white and the yolk. The knife would hit the yolk and it would sort of drag or turn. I tried a few different grips and I ended up just kind of clawing it.

For next time, I have considered trying to freeze the boiled eggs and letting them thaw slightly before slicing. Something in my gut tells me that frozen hard boiled eggs won't be good eats. It seems like the texture would be changed.

I have read about using dental floss to make a clean cut... but I don't see how that would help here. Is there some magical dental floss technique that I'm just not envisioning?

Some quick Googling also lead me to the idea of wetting my knife or adding oil before each cut. I really feel like the problem is the egg itself and it's awkward shape and consistency. But maybe there's something to this advice after all?

As you can see below, I ended up with some small guys and some fat guys. They were tasty, but I WANT PERFECTION! 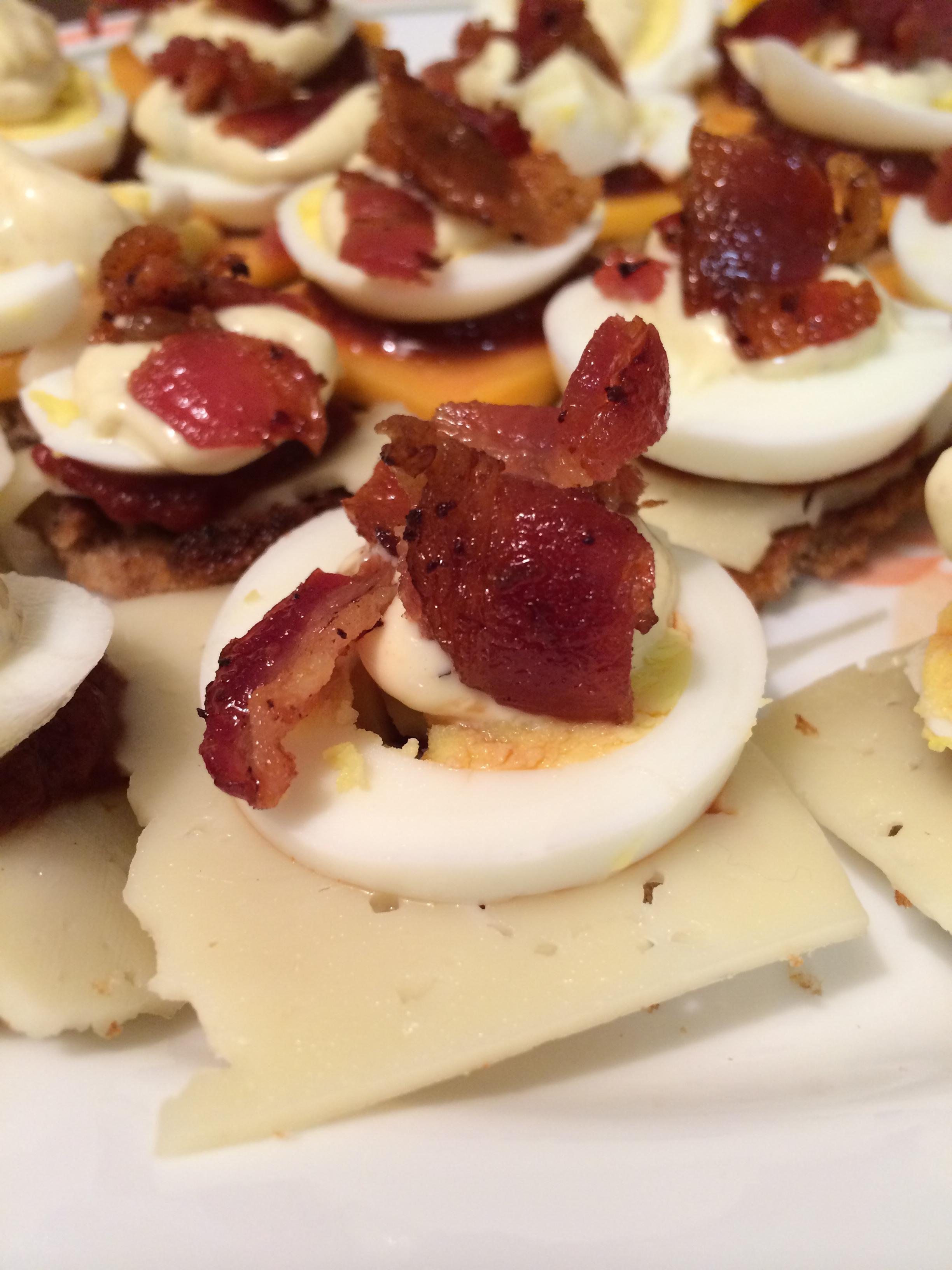 Between slices, dip your (very sharp) knife in water. It really does work. You don't want your knife wet enough that it makes your eggs wet, it just lubricates. Also, the eggs should be very cold before slicing. Your finger food looks great BTW.

Egg slicers work very well for this - consistent, thin slices. It's also good for more than just eggs - mushrooms, avocados, mango and strawberries also slice nicely in a well-made model. Avoid the cheap ones - the wires aren't solidly mounted and will break with regular use.

Two solutions to consider, either separately or together:

2.) If you don't have an egg or strawberry slicer, the dollar store generally has onion holders for a buck or less. Use it to hold the egg in place and slice right flush with the tines.

Ok I am clearly confused as to why you wouldn’t just use an egg slicer, one of the smallest gadgets available to have to store. Clearly oiling, wetting using onion cutters are all time wasters. Just get the egg slicer. Also the wire slicers for cutting cheese for deviled eggs, there are fancy ones or the knife shaped ones with triangle shaped holder so you can cut a variety of items. Frankly I find the egg slicer handy as you can slice an egg, turn it the other way any turn again to make easy diced eggs for salads etc. my kids loved eating eggs sliced and less likely to choke. It seems to me you're making life harder instead of paying a few bucks for a cheap slicer.

Try wetting the knife, or use a wire slicer (some plastic tool with steel/nylon wires stretched across an egg shaped indentation). Also, make sure the eggs are hard boiled, and cold.

Not the answer you're looking for? Browse other questions tagged eggs knife-skills or ask your own question.

12
what's a good technique for pasteurizing eggs?
8
Sous vide eggs - how to get a perfect soft-boiled egg?
10
If a few of my eggs crack when making them hard-boiled, is it still safe to eat them?
1
Undercooked eggs that were in the pot plenty long
5
Why would you pinch egg whites when making sunny side up eggs?
2
Knife for cutting steak slices from whole ribeye?
16
How to make century eggs?
10
Pickled Eggs with slightly gooey yolks?
5
Why and how does the egg white stick to its shell when cooked sous vide?