Why would a rice seem "non-absorbent"?

I wanted to make a mushroom risotto with some very nice mushrooms I had acquired. I have made risotto countless times, using traditional methods and "cheater" methods. I didn't expect to have difficulty, but I did.

I always use Arborio rice for risotto; generally I buy it in bulk by mail order or any brand that they might have at the grocery store. I've never paid any attention to brand name or where it comes from. Arborio rice has always behaved as I expect Arborio rice to behave. I bought this last time just because it's what my grocery store had: Amazon 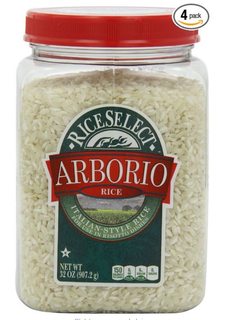 The first time I used this product I just set out to make standard Parmesan risotto. I sauteed the rice until vaguely translucent, deglazed the pan with wine and added simmering broth bit by bit while stirring. It was taking forever and I suddenly decided to scrap it and go with plan B. I really didn't give it that much thought at the time, but it should have been moving towards done well before I gave up on it.

So today I had these mushrooms and wanted to use them in a risotto. I proceeded in my usual way; I sauteed the mushrooms, added the rice and sauteed it, deglazed, and proceeded to add the simmering broth and then,...and then, nothing. It was as if I was simmering pebbles. After 10 minutes the first ladleful of broth was gone (apparently due to evaporation), but the rice was still hard. I kept it up for the better part of an hour and used more broth than the dish should have required, but the rice was still hard. This rice doesn't seem to want to absorb water.

I'm still 2 years out from the "best by" date and I'm using tried and true technique.

Do you have any idea what could be going on? BTW, the Amazon reviews are fine, no clue there.

UPDATE I used the same rice again, this time following the new recommendation on Serious Eats. I soaked the rice for a few minutes in the broth, agitating a bit to loosen exterior starch. Then I strained the rice for several minutes, reserving the starchy broth. I used that broth to make the risotto. By golly it worked. This doesn't answer the question, it still doesn't make any sense that that it didn't work without soaking, but at least I know a way to deal with it now. Serious Eats recommends that method for the creamiest risotto, and it doesn't really add much effort, so I'll probably continue to do it that way - even with my next batch of rice.

I'd still like to figure out what was going on.

Based on your edit, my best guess is that this particular rice has a really high amount of surface starch, which gelatinized when you first tried to cook it (liquid from the mushrooms might have been enough to get this result). That would have created a moisture-resistant layer around the grains that inhibited moisture from soaking in further. Your soak would have washed that away and allowed the rice to properly absorb the broth.

That's definitely weird - probably a byproduct of how this particular brand gets processed. A further experiment worth trying would be to briefly rinse off the grains in a colander for your next batch. That would also get rid of surface starch without quite the same effect as a soak. If they work after even a brief rinse, I'd consider that pretty good evidence for this theory.

Another thing you could try might be sauteeing the rice in a completely separate pan from the mushrooms, so that they're exposed only to oil and the surface starch gets toasted instead of gelatinized. Maybe not quite as desirable from a flavor perspective, and of course you'd have to clean another pan, but it's worth testing if you really want to figure out the root of the problem.

This has no effect other than doubling or more the time taken to soften. Annoying as the food isn't often labelled as such

Not the answer you're looking for? Browse other questions tagged rice risotto or ask your own question.

4
Why is the rice in my mushroom risotto always very hard?

12
Arborio and Risotto
15
Why do I need more time and liquid than my risotto recipe calls for?
9
Why is my Spanish rice chewy?
15
When making risotto, why fry the rice?
21
What is the difference between risotto rice and paella rice?
4
Substitute for arborio risotto rice?
4
Why is the rice in my mushroom risotto always very hard?
3
What causes butter to make risotto shiny?
3
Is risotto or paella rice a better substitute for my Japanese dish?