I want to duplicate my bread mistake!

I make all of my own bread. For just everyday use my go-to recipe is as follows:

I use a Pain de Mie pan like this: 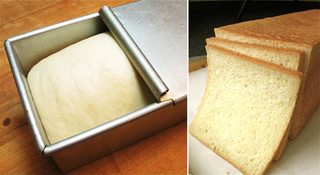 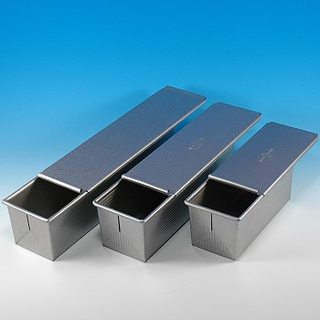 Typically a loaf loaf looks like this, I made this loaf a few weeks ago: 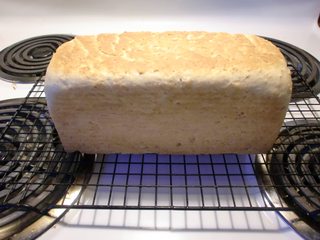 Over half the times I have made this recipe (including yesterday), I've used my bread maker to knead the dough. I always use my (spookily accurate) digital scale to measure the ingredients; I put the bread maker insert or bowl on the scale and tare between ingredients. I always bake in the same Pain de Mie pan. Up until yesterday it has always taken 1 hour for the first rise and a half an hour for the second. I preheat the oven during the second rise, I bake for 25 minutes (per digital timer), covered, then 5 more minutes uncovered. It's as routine as brushing my teeth.

But this is where it got really weird. The dough just went nuts in the oven. It oozed into the lips of the pan lid and onto the oven floor. You can see the shape of the loaf is odd because the dough was squeezing into the crannies. 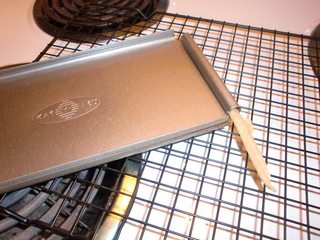 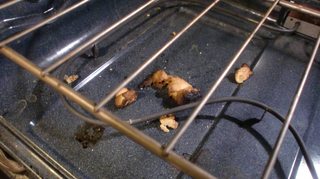 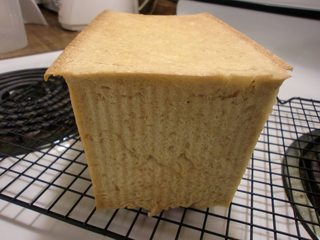 I would just blow it off, chalk it up to human error, and assume that my next loaf will be normal. But, this bread was the best loaf of this type that I've ever made, so I want to figure out what I did wrong so I can do it again :)

I have not shopped since my last loaf, just a few days ago, and I haven't opened any new packages. So it can't be different oats, salt, butter, yeast or honey.

It is possible that I grabbed the 00 flour instead of AP (but not terribly likely, the canisters are different).

The measurements listed in the recipe by grams could have been measured incorrectly, but in this case weight errors seem less likely than spoon errors.

The least likely measurement error would be the water because I measure the water in a Pyrex measuring cup, heat it in the microwave, stick a thermometer in it until it comes down to 110F, and then pour and weigh it. So the measurement of water is redundant, and that's a pretty solid habit. I specifically remember that my water temp was normal as well.

The mistakes that I can most easily imagine are for the salt or yeast. I could have accidentally grabbed either a tsp measure or a TBS measure for the salt. I usually use a 1/2 TBS measure.

For the yeast I usually use 2 tsp measures and a 1/4 tsp measure. So 3.25 tsp would probably be the most likely error of that type.

So. With that info, what would you say is the most likely reason for this great loaf?

EDIT: It's such a good and (usually) foolproof recipe, I thought I'd share the rest of the recipe details. Use a 9" Pullman Pan, this one is great. Mix dough ingredients and then give it a 20-30 minute rest to hydrate the oats. If using a breadmaker, just run it through mixing, unplug it for 20 minutes after mixing, before kneading. After 20 minutes plug it back in, starting over, and let it run through the dough cycle. If hand kneading just knead as normal after the rest, let it rise in a warm place until doubled, about 1 hour.

Give the pan and lid a bit of Pam or butter (not much, the pan is very non-stick, I do it mostly just for crust texture), shape, and place the dough in the pan. I poke across the top until it looks pretty even. Cover with plastic wrap, proof in a warm place until the dough averages just shy of an inch or 2.5cm from the top of the pan. Put the lid on and bake covered in a preheated oven for 25 minutes. Uncover and bake for another 5 minutes or until it registers about 195F (90C).

Remove loaf from pan and cool on a rack.

I think adding the butter twice could maybe account for it. extra hydration, then collapse.

That seems like quite a bit of fat already. (just based on what I've done myself)

If the dough is normally close to being over hydrated, when it gets too close to the stage where it collapses, a tiny bit more liquid can tip it over the edge. Maybe even an unusually humid day.

I have a funny feeling that butter doesn't interact with gluten the same way as water, but I still think it's the butter.

Whatever it is, I've made that loaf myself more than once :)

There are three factors that will make dough rise more quickly:
1- More water
2- More yeast
3- More heat from any source

More yeast will make the bread rise more quickly but won't create the sticky texture and better flavor that you describe.

More heat will be the same, not just from your heated water but also the temperature of the room- it would accelerate rising but not change the final texture. I have noticed that when my water is too warm that the dough is stickier- but not after rising.

More water will make your yeast able to act more quickly. It will also create steam that will make the crust a little chewier. It would also, obviously, make your dough stickier.

Even though your process makes the water content the least suspect variable- In my opinion, it is the only one that matches your symptoms. Perhaps the day was slightly more humid than you thought? Perhaps you mismeasured a little?

It's easy enough to experiment with your next batch and add a little bit more liquid.
Artisan bread just gets better with more liquid. Sandwich bread doesn't so don't bump the water content up too far. My standard sandwich bread recipe is 65% hydration by weight.

Maybe you were distracted while mixing the ingredients and ended up proofing the yeast.

To proof your yeast, you'd mix the warmed water with the yeast and sugar (honey in your case), then let it sit for up to ten minutes or so before mixing it with the other ingredients. The yeast should begin forming a head of foam on top of the water.

Historically, this was done to test that the yeast was still alive, hence the name "proofing". With modern yeast, that's not much of a concern. But I've found that the proofing step helps quite a bit with the rise. That may be what happened to you.

Our last 3 pullman loaves were like this as well, oozing out of the pan. I think it was a combo of a warmer day, letting it rise too long in the pan before closing the lid. I suggest less rise time and a tad less water.

2
What difference does it make if I substitute low-fat milk for water in bread recipes?

1
Why did my French bread neither rise nor bake properly?
3
Slow-fermented bread doesn't rise
2
How is it that brioche rises so high?
2
What difference does it make if I substitute low-fat milk for water in bread recipes?
4
How to bake large batches of bread
2
New bread maker asks: how to make a bread loaf stay 'firm and solid' without a loaf pan?
5
Do I have to adjust anything to add seeds to bread?
4
Can I freeze bread dough after the first rising?
1
Will my bread dough that has already gone through first rise be okay to bake after three days of refrigeration?