Off taste from refrigerating cheese?

Every time we get a extra large block of cheese, by the time we get to the end of the brick, what's left gets an off taste, from being in the refrigerator so long after opening the package. The price per pound is much more economical for the large blocks of cheese, so if it's possible, I'd like to know how to prevent or undo the off-taste that comes from being in the fridge too long once the package is unsealed vs just buying smaller bricks. Even if I leave the original wrapper around half of the block that doesn't seem to help. Usually I store the open block in a freezer-weight ziplock bag.

First, don't wrap your cheese directly in plastic. There is such a thing as cheese bags, and for what it is worth, they're highly recommended by America's Test Kitchen, AKA Cook's Illustrated. The same company makes flat paper for wrapping. Expensive stuff, but you may find it worth it.

From the the kitchn, an article written by an author with impeccable bona fides:

• Place the parchment or waxed paper flat on your counter with the wedge on top, and then bring the edges of the paper up and around the cheese, creasing as you go to make neat, clean folds. You can use tape to secure if you'd like.

• Label the paper with the cheese variety and date.

• A loose plastic wrap or a plastic bag over the paper generally keeps things tight (and keeps out fridge odors).

• Keep your cheese in the warmest part of the refrigerator, like in your cheese or vegetable drawer. An even better method is to designate a large tupperware container as your cheese home, where all of your cheese pieces can live. 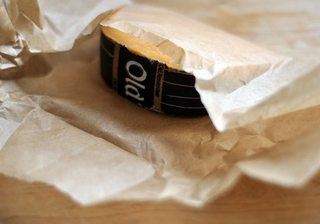 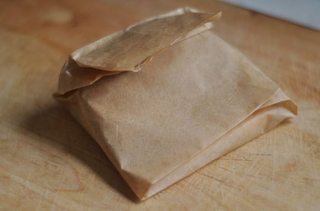 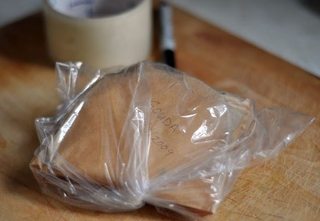 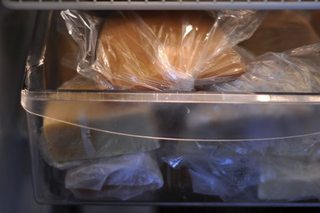 As you specifically mention that it's an 'extra large block', you might want to consider re-packaging your cheese when you first open the package. Divide it up into 2 or 3 more manageable portions, so that when you're using it, you're not re-exposing the whole block.

If you don't want to shell out for cheese paper specifically, and don't have butcher paper or similar, you can wrap firmer cheeses in a paper towel, and then place that into a plastic bag or wrap with plastic wrap -- this avoids the issues with wrapping the cheese directly in plastic.

Dairy tends to "catch" odors from other food in the fridge, although cheese rarely shows it, you must be buying some mild variety. The other possibility is that something is growing on your cheese.

It is impossible to remove the smell once it has settled in. If it is really the "stale refrigerator" variety, then the only thing you can do is to protect the cheese from the odorous air. If the ziplock isn't helping, you can try a tupperware style container with an airtight seal. Also pack everything else in the fridge, so the odors don't mingle; don't keep anything open inside.

If it's the cheese itself which is getting musty, because it caught a mould or a bacterial culture, there isn't anything you can do with a fridge. Cheese is not a product which is supposed to be stored in a fridge; it is a product optimized for a root cellar at 12-15 Celsius, with sufficient air movement. Weeklong storage in a fridge is not good for it. You have the choice between enclosing it airtight (which stops it from taking in odors from other foods, but makes it wet enough to enable the growth of moulds and bacteria, and also to change its texture unpleasantly if it is sitting in a puddle of its own condensation), or wrapping it in cheesepaper, which allows some air exchange. In the second case, it will soak up odors from outside.

If you are already packing it airtight, try packing it in permeable packaging. If your packaging already exposes it to fridge air, try using an airtight packaging. Removing one odor source will expose it to the other. You will have to check and see which is less offensive for you.

9
How best to store cheese long term?
3
How to prevent cheese and certain other products from stinking up my fridge?

4
Refrigerating Clam Juice
3
Brined cheese behaves almost as if carbonated
2
refrigerating meat after cooking
3
Refrigerating leftover cooked potato
1
refrigerating cooked waffles
0
How can I mellow the taste of this goat cheese
1
why pepitas (pumpkin seeds) taste like blue cheese?
5
How to get vegan cheese to taste like cheese