How do I clean my cast iron grill pan?

I'm recently the proud new owner of what I appears to be a Le Creuset "Skinny Grill" which is an enameled cast iron grill pan.

I fairly new to cast iron but I'm accustomed to the no-soap cleanup and maintaining a season. This pan, however, is making me crazy. The little ridges make it difficult for me to get anything down in there. They are higher and spaced more closely together than the photograph below may indicate. I can barely get a fingertip down between the ridges, let alone a paper towel or rag. If you do manage to get something in there for wiping, little bits and fibers get torn off because of the rough surface. That's clearly not good eats.

Most of the "advice" I've read online (mostly message board conversations between folks who are facing this exact problem) say to use soap and water and scrub it down like it's any other pan. If I'm reading it correctly, the general advice on the Le Creuset website even suggests a ride through the dishwasher! I'm worried about ruining the season. It's tempting to dunk the whole thing in warm soapy water and go at it with a scrubby pad but that just feels wrong.

Incidentally, the previous owner abandoned this pan for this very problem. It "made a mess" and they "didn't know how to clean it."

Do I just treat it like a regular cast iron skillet?

It makes a tasty burger... 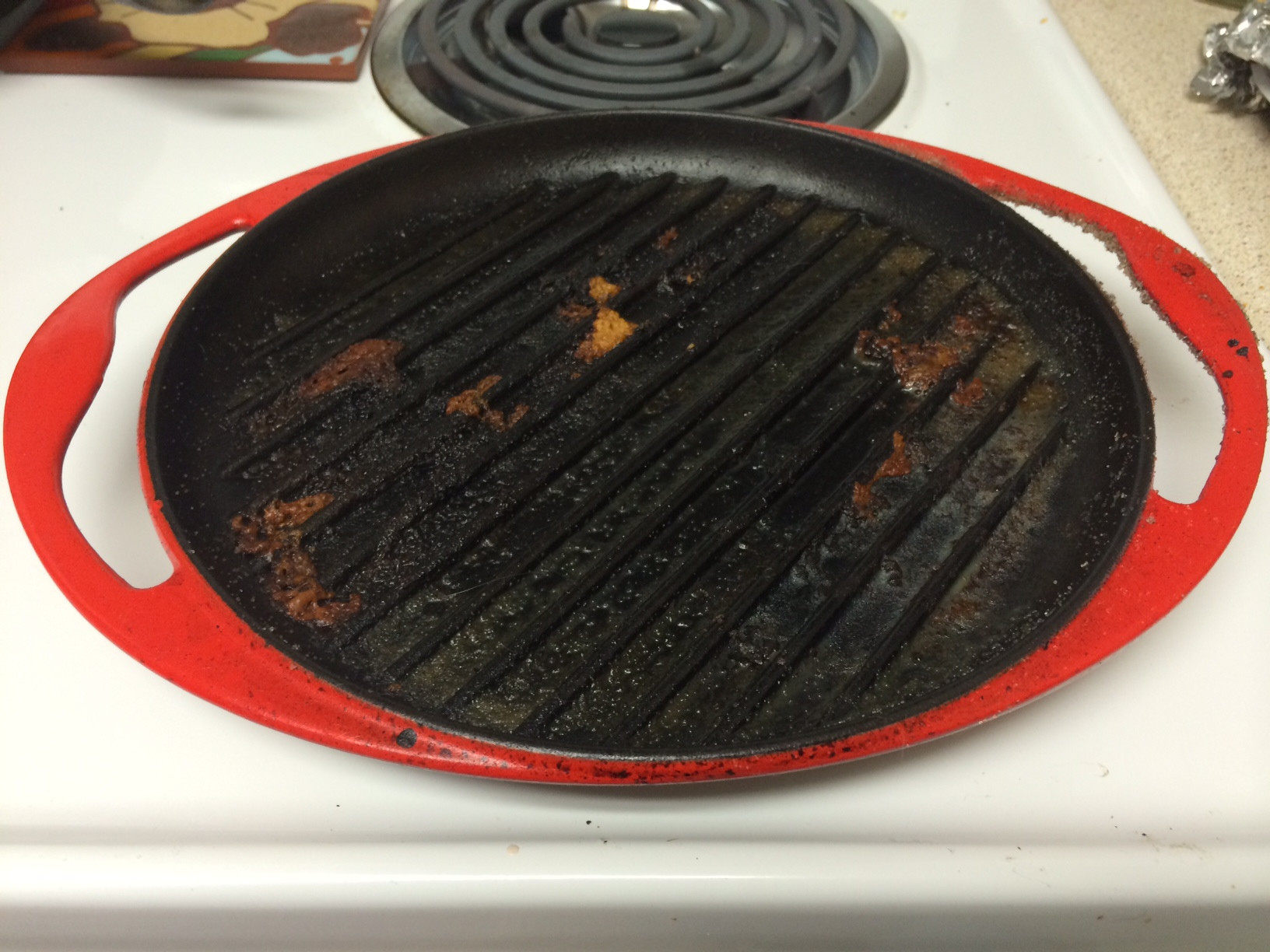 Edit: After playing around on the Le Crueset website a bit I'm finding separate instructions for cast iron and something they call "Satin Black Enamel." Is this not a cast iron surface? Now I'm extra confused.

I own a similar square grill pan and have always had luck cleaning it with a stainless steel scouring sponge and lightly soapy water. The spongy texture is very effective at getting down into the grooves. No need to be especially vigorous - a couple quick passes will take out accumulated residues, and you can use a regular sponge afterward if you like. I've no idea how they season these, but it seems to hold up quite well over time. As near as I can tell, you can also re-season these just like any other cast iron when it does degrade.

Their statements about enamel are probably referring to the outer, colored finish - I also own a Le Creuset dutch oven which has the same enameling inside and out. Care and feeding of that surface is of course totally different from cast iron.

This Le Creuset Skinny Grill is CAST IRON. All you have to do is soak it in water for fifteen minutes or fill it with same. Hot H2O will clean it faster. Then use a plastic bristle brush to brush out the residue. Don't even bother with soap, just plain water.
Never in the dishwasher! And never put it away without cleaning it every time. Both sides.

Keep in mind, this is a Grill. It gets all-mighty hot before you cook on it. That alone will kill any bio residue which may remain.

Don't make a mountain out of a molehill. . . . Cast Iron care is super-simple ! Good Luck.

For what it's worth, I use one of these (not filled with soap, obviously -- it's my dedicated cast iron brush), oil, and salt to clean my grill pan. I use to curse and go through lots of paper towels until I tried this, and it has worked great for me: http://www.oxo.com/p-815-steel-soap-dispensing-palm-brush.aspx

After cooking, pour off fat and brush off remaining food bits. Heat it again, and let all the grease and remaining fluid boil off. The black stuff will peel itself off. Trust me. You can help it along by taking a grill brush, and brush it like you would your grill. Rinse, heat again until dry, give it a light swipe of vegetable oil, and store.

All the information you need about Le Creuset products are right on their website.

As for their grills this product is cast iron. However, the cast iron on the outside is covered with enamel. The cooking surface is a finish they call Satin Black; it is NOT cast iron, and it's not Teflon either.

So, never scrub with abrasive products. Never use metal utensils on this grill or anything metal to clean this grill. Don't worry about using water...it's not a cast iron finish. Like most all other Le Creuset products, soak in warm soapy water, then use a plastic brush or sponge.
The website also has specific instructions for cooking that help tremendously in making sure you don't end up with an uncleanable mess. No it's not necessarily intuitive.!

Cleaning instructions (be prepared to scroll up and down to find information specific to your Le Creuset item) (https://www.lecreuset.com/care-and-use#ci-cleaning)

When I'm done cooking I heat the grill pan until the grease is burned off. When its cooled down, I use a really big flathead screwdriver to scrape the crud between the ridges, then to scrape the ridges themselves. A small chisel might work too. Just make sure to burn off the grease and lay out a lot of newspaper to catch the scraped bits.

I have a square Lodge Logic 10" Cast Iron Grill Pan, and the best solution I have come up for cleaning in between the ridges is a stiff bristled toothbrush. When I have stuck on bits of food between the ridges. I will pour off the grease (if there is any), then run under hot water while it is still hot. Then I will put in enough water to cover the ridges and immediately scrub it gently with the toothbrush, dry it with a cloth, put it on the burner for a minute to finish drying it, and then season with a bit of oil.

I use a wad of crumpled aluminum foil. Works great. I am going to try adding salt and oil after reading these.

I have found. Including the above. That taking a lathing strip or wood shim stock. Found at hardware stores in lumber. Scrape the grill top with it. The soft wood quickly takes the shape of the ridges. So works well as a scraper. Lightly oil. Let set overnight. Rescrape & they are clean with out damage. Also works on the grill plates of outside cast iron grill plates. I like them better than the brass brush's & steelwool Others use. Boiling also works or helps. But a scraper that wears to exactly fit the groves of wood works best for me.

I saw on Rachel Ray.......wipe with Crisco and sprinkle salt all over..let sit overnight. My grill cleaned up very well.

Spray with oven cleaner, foam up ,let it rest for 10 to 15 minutes scrub with sponge with rough side,rinse, dry with paper towels, season pan put away ready for next time. I also spray lightly with Pam before I start cooking