Does anybody recognize this Finnish dill sauce?

My husband brought back a homemade sour cream dill sauce from Finland. It was thick, perhaps with a puréed vegetable, but I couldn't taste cucumber or the like. There is definitely some texture there. Any suggestions?

You can add some mustard and lemon if the mayo is bland.

The taste is smooth and quite neutral with the dill as the lead actor.

A note on the sour cream. It can't be a thick, heavy consistency. It should be quite light and slightly uneven in texture (whisking makes it smooth). It is almost yoghurt like and contains about 10% fat. I have seen suggestions that low fat sour cream can be quite similar. I get the impression IKEA stocks it globally. 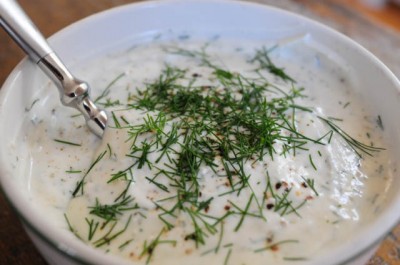 Finn here. Tillikastike (dill sauce) is almost always prepared with kermaviili, a type of viili (vaguely yoghurt-like fermented milk product) which is unfortunately basically unknown outside Scandinavia. Gräddfil, mentioned in Captain Giraffe's answer, is the Swedish version of this.

Sour cream is the closest substitute, but it's much heavier, creamier and more sour than the real thing (40-70% fat, vs only 12% or so in kermaviili), whereas crème fraîche is also too fatty but not sour enough. Fatty unsweetened yoghurt or quark mixed with a bit of water will also do in a pinch.

If you can get your hands on some of the real thing, the recipe is simplicity itself: just mix with chopped dill, chill, and serve. Adding mayo would be unheard of in Finland, but a squirt of lemon or a dash of mustard would be common, particularly if this is to be served with fish.

Maybe it's dill herb, not cucumber.

Not the answer you're looking for? Browse other questions tagged sauce finnish-cuisine or ask your own question.

3
How do I make vanilla sauce without air bubbles?
20
How can I reheat a roux-based (alfredo) sauce in the microwave without separation?
8
How do I cut bones in preparing a fast brown stock ("fond brun rapide")?
3
Did 150 °C (300 °F) ruin my cream sauce, or is it just overcooked, or fine?
2
Why does the roux break down in my chicken velouté sauce?
3
Should I peel my tomatoes before making a sauce?
15
Does adding water back into an over-reduced sauce lose flavour?
1
How can I make a "lighter" cheese sauce?
0
What kind of sauce did I "invent"?