I watched this video titled: "Cheats Quick Puff Pastry Recipe by Paul Hollywood". The one claims that it will result in the same dough and as flaky as the original puff pastry. The trick is, he used frozen grated butter instead of cubes of butter and used it twice in the rolling process. I would like to know if this really works, because then I don't have to wait for the butter to get softer so that flattens.

Yes, that will work just like traditional methods. That's the real deal, it's not even a cheat, it's just smart.

BTW, the last line in your question raised my eyebrows. In puff pastry there is no waiting "for the butter to get softer so that it flattens". The butter is flattened (or sliced) with brute strength while the butter is still ice cold. That's critical to puff pastry. If the butter melts even a little before the layers are formed and it goes in the oven, you're sunk. The final product will be greasy and won't puff as much as it should. You get that puff by having very distinct layers of butter between layers of dough. If the butter is allowed to get warm, even a little, it will absorb into the flour.

For those disinclined to watch the video but still interested in puff pastry: What Mr Hollywood did in the video was grate frozen butter, then he kept the grated butter in the freezer until he had the rectangle of dough ready for the butter. Then he just sprinkled on the frozen butter and did the first envelope fold. He rolls that out into rectangle again, adds more frozen butter, and repeats the fold. Fridge for one hour, one more roll, fold, roll, done. Well! I wish I had thought of that.

I'm still not particularly interested in making puff pastry from scratch since I doubt I can improve on the frozen stuff, however, I was encouraged by @rumtscho to try my hand at croissants. Since croissants are basically puff pastry with yeast, I decided to form my croissant dough using Mr Hollywood's technique. 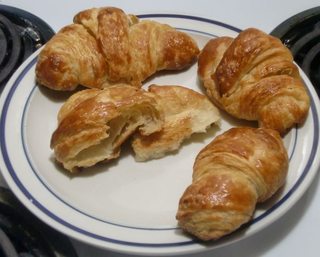 Not the answer you're looking for? Browse other questions tagged puff-pastry or ask your own question.

6
What techniques or tricks make soft, flaky pastries instead of leathery ones?
6
Puff Pastry vs Pie Crust
4
Substitutions for “European style” butter in croissants
5
Problem Rolling Out Rough Puff Pastry
4
Impossible to Roll Croissant Dough
5
What to do when too much butter added to my puff pastry dough?