Also, what is temperature reached by such frying. Teflon decomposes at 250c - does normal home use ever get near such temperatures ?

Cast iron or carbon steel. Both require seasoning with oil and neither are non-stick immediately, but rather after seasoning and some use, the pans become more non-stick over time. But once they're properly seasoned, they're as non-stick or nearly as non-stick as teflon and the like. They do, however, require the use of fats in cooking. And they can last 30 or 50 years. Or longer.

The one alternative is ceramic pans. They are pretty awesome as long as they don't stick, much better than Teflon. However, they fail earlier, after maybe 6 months of regular, but not heavy, use. After that, they can still be used for cooking, but aren't really non-stick. They can stand much higher temperatures than Teflon (the manufacturers give them a 400 Celsius rating), but the speed of decay doesn't seem to be connected to the temperature. I don't have hard data on that, but they don't have teflon's sudden failing after a single overheating, they just stop working gradually, without sudden reductions after higher temperature applications. Until they fail, they are more comfortable than teflon, because they can be used with any utensils without fear of scratching.

The other thing you can consider are cast iron pans. You can throw any temperature at them, and if you season them properly and learn how to cook at the proper temperature, they are very good in the non-sticking department. The downside is that they have a learning curve. They require proper care, and food will stick if they aren't heated to the correct temperature. I've seen people throw an egg into a teflon pan, then turn the plate on and go away for the next five minutes - this won't work here. But once you learn to cook your eggs properly, you'll also have tastier eggs. They also eat up more energy, because the pan itself eats up lots of it. Related to that is that, on a resistive hob, you might have to wait a long-ish time for them to heat up, if you have chosen a large one.

Summary: If you want something which is carefree and durable, there are no alternatives to teflon. If you are willing to learn to cook in cast iron, you will first face a learning curve and later produce much better results with a slightly more effort. If you are willing to change your pans frequently, you can use ceramic.

The options for non-stick cookware that contain neither PFOA (perfluorooctanoic acid) nor PTFE (Polytetrafluoroethylene), the substances better known as Teflon, are limited. Most are ceramic, the general consensus on those (Consumer Reports, America's Test Kitchen, Amazon reviews, and rumtsho all seem to agree) is that the non-stick surface is great for a while but wears out quickly.

There are quite a few hard-anodized aluminum pans that make a non-stick claim, but in actuality they are not nearly as slippery as Teflon. The most well-known brand is Calphalon. That brand touts "stick resistance" not "non-stick".

Having never used ceramic cookware, I can't make a specific recommendation, but I can say that Good Housekeeping recommends the Sandflow brand. The Amazon reviews are somewhat less encouraging.

As rumtscho pointed out, cast iron can be pretty close to non-stick, but there is a learning curve.

As far as your second question, that one I can easily answer. 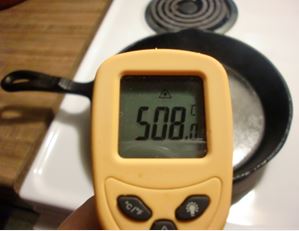 That is celsius by the way. Of course the pan is cast iron, I wouldn't get any other pan I own that hot. That's how I sear steaks (after I take the batteries out of my smoke detector).

For day to day use, you can easily keep Teflon to well below recommended temperatures. Preheat with care over low heat (or not at all), and don't go beyond medium heat except to boil water. BTW Allowing water to boil away is the easiest and most common way to overheat pans.

You might find this several page article from HowStuffWorks of interest.

You generally don't want to be cooking eggs or pancakes at 250°C, so Teflon is fine for this purpose

Both eggs and pancake mix consist mostly of water, so you would have a hard time raising the temperature past 100°C until the water has been mostly evaporated. Unless you uses a large fat or oil film, which you don't need in a Teflon pan

Bacon and steaks can go in a cast iron, stainless pan, or any plain metal pan

Not the answer you're looking for? Browse other questions tagged frying frying-pan teflon or ask your own question.

0
Is nonstick cooking bad for the environment?

3
What causes egg-covered puffed rice cakes to become soft when pan fried (and how to control it)?
3
Ideal pan temperature for frying meats (kangaroo, chicken etc.) using IR thermometer?
5
How to make perfect crispy bacon strips?
6
Normal lifetime of non-stick teflon pans
2
Teflon-coated pans: are they ever dishwasher-safe?
4
Why does oil puddle in some non-stick frying pans but not in others?
15
Removing long-term residue from teflon
5
Scientific results on which oils to use for pan-frying
1
What type of skillet is most suitable for vegetable frying/sautéeing?