How to clean an octopus - and is it worth it

I've bought an octopus from my fish monger, but, when I asked if he could clean it, he openly admitted he's never done octopus before and doesn't know how. Well, neither do I but I've taken it on myself. This is clearly a poor decision, I don't even like gutting fish!

I'm reading up on this, and a certain website says the following

Octopus must also be cleaned, so you may want to ask your fish monger to do it if you're uncomfortable doing so yourself. Hold the head under running water to simply remove and discard the ink sac, stomach, and eyes. Then use a sharp knife to cut out the beak, which is found at the bottom of the head

I'm very lost with this statement; it seems like the article suggests by holding the head under water, everything will just fall away (doubtful otherwise it would have a rubbish time being a sea creature!). Has it glossed over the 'how' because it's very difficult?

More reading on other sites suggests that the head is very gelatinous and the vast majority of meat/flavor is from the arms.

So, based upon my own research (if it is correct), is it worth cleaning an octopus (and if so, can some one explain how) or would I be better off just chopping the head off (and removing the beak) and discarding them, keeping just the legs/arms?

This a a great video that explains every step. She cuts the head off by slicing above the eyes, so removing the beak is a part of cleaning the tentacles. 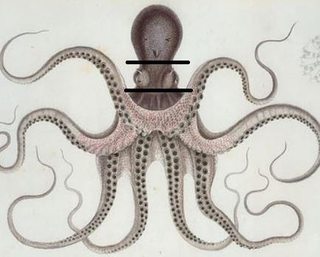 These are your first cuts.

Cut the head off above the eyes, and slit the head open. Rinse out the guts, there will be some connective tissue that needs to be cut away or broken to get to all of the yucky stuff. Rinse thoroughly and peel. It's easy.

Cut the tentacles away below the eyes (the slice now that contains the eyes can just be tossed). That will expose the beak, which is at the center, where the tentacles meet. That just pops out.

The tentacles can just be rinsed and cut as desired.

Easy, and totally worth it. Good luck.

Of course you can keep the octopus "whole" by slicing out the eyes in a kind of pie wedge shape cut, exposing the beak and guts to be cleaned away but keeping the connection between the tentacles and head intact at the "back", otherwise following the instructions in the video.

Not the answer you're looking for? Browse other questions tagged seafood butchering or ask your own question.

3
How to cook baby octopus?
8
Can I grill a whole octopus without pre-steaming or poaching?
9
Sous vide octopus for maximum tenderness
17
Why boil octopus with wine cork?
3
Using liquid nitrogen for tenderizing octopus?
0
Scientific method to microwave octopus
5
Should I eat the head of an octopus?
12
Does cooking octopus in salt or pastry crust produce juicy octopus?