How to make XXL Watermelon Jell-O Shots without falling apart?

I was trying to make XXL Watermelon Jell-O Shots but the Jell-O was not firm enough and fell apart. Should I use more Jell-O and less water next time? The recipe requires unflavoured gelatin but I can't find it in the grocery store nearby, hence can I use more Jell-O so its more concentrated and thus more firm?

I'm totally retracting everything I said in comments. Doing this with just Jello (no unflavored gelatin) works just fine. The key is A LOT of Jello.

Unbelievably, it worked. The firmness of the gel seems just right for the purpose.

This is cherry Jello, so the color is too burgundy. Unfortunately, I had to do it again to say for sure that the flavor is OK. I had no Jello, but my next door neighbor had some sugar-free. I so fully didn't expect it to work that I didn't care that it was sugar-free even though I knew full well that aspartame at that concentration was going to be inedible (and I was right - UGH).

So, I went to the store today and bought an 8-serving package of Jello. This time I used strawberry flavor with real sugar. In a bizarre coincidence, I saw something else in the store that I had never before seen in the state of Alaska: Mini Watermelons.

WOW, so I got one of those too.

Here we go again. I mixed the double sized box of Jello with 160ml of boiling water and whisked until dissolved (that took a couple of minutes), then I mixed in 160ml of vodka. As that cooled on the counter I scooped out most of the flesh from half of the watermelon.

After chilling overnight, it's all over now but the cutting. 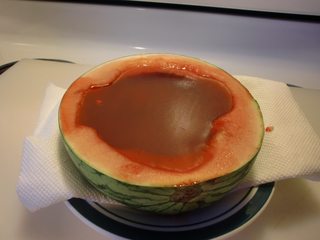 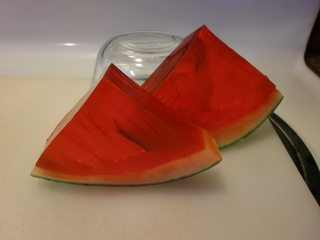 The only reason I felt the need to lean the slices up against the custard cup in that shot is that I sliced them too thin. I was trying to make up for the fact that the watermelon is tiny. Cut these suckers a good inch thick (2.5 cm) and they'll stand just fine.

I had just enough jello/water/vodka mixture left after filling the watermelon to make a shot of that plus a shot using the same ratio of Jello/gelatin/water/vodka as in the original recipe. 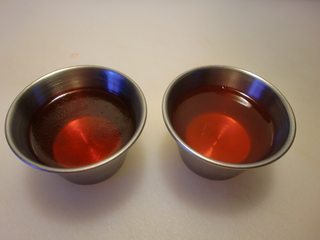 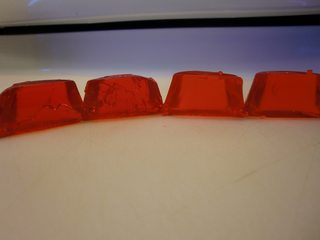 This stuff is so boozy, that I think the additional flavor and sugar of the all Jello version actually tastes better than the original recipe.

I'm shocked, but you don't need unflavored gelatin to make this silly thing.

EDIT: 24 Hours later, I've got to add this. As I was carving the flesh out of the watermelon rind yesterday, I realized that I was being silly to be so thorough, especially at the ends. I really only needed the center slice for the experiment and a photograph. So just now I knocked off the Jello from one of the end pieces to eat some watermelon. That was really good! It had absorbed some of the vodka and flavoring, but the texture was just like fresh watermelon. So if you do this, do it a day in advance and leave some of the flesh of the watermelon. You'll thank me :).

This step mentions you require the extra gelatin: 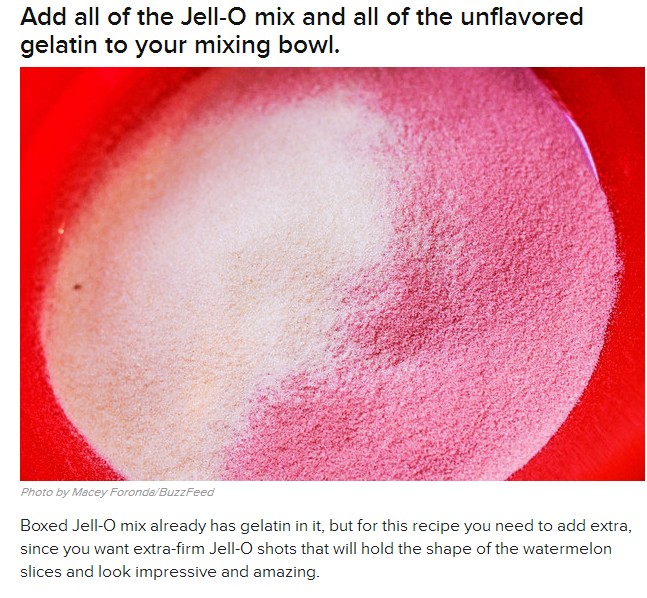 You could kind of "wing" the ratio but that's risky. But when it comes to Baking/Pastries/Deserts, you must get the ratios perfect; even when it comes to gelatin. Coming from experience: there are few foods worse than over gelatinized foods.

I would go the safe route and find the necessary amount of unflavored gelatin to add to the original mix.

You said you couldn't find the gelatin? It's really common and found in the baking aisle with the nuts and cake batters and such. I'm not sure what is in your area but a more "mid level" or "high class" grocery store like VGs, Krogers or Wholefoods will very likely carry the gelatin. The grocery area in a place like Walmart for instance, may not carry the gelatin.

In short: don't wing it, just get the gelatin.

Also, another thought. Maybe take a fork and create some "channels" in the watermelon. If the inside of the watermelon is perfectly smooth, the gelatin won't be able to grip as well. Just an idea.

Not the answer you're looking for? Browse other questions tagged recipe-scaling gelatin watermelon or ask your own question.

45
How do I pick a watermelon at the supermarket?
16
How do you make Welch's fruit snacks?
10
How can you make gelatin at home?
2
How to make Jell-O less sweet?
5
How do you make pie with Citron watermelon (not just the rind)?
3
What is better for chilled cheesecake - pectin or gelatin?
1
How much gelatine to use instead of xanthan or guar gum in ice cream
1
Ultra thick and fluffy pudding
20
How to de-seed a watermelon?
1
Can gelatin change color of butterfly pea tea?