Can you candy salt?

I'm working on a pretty amazing ice cream. It's Dulce de Leche, made the kind of scary traditional way of boiling cans of sweetened condensed milk, then mixing that with a custard and freezing it in my ice cream maker. As a recipe, it's getting there. I use the scraped seeds of a vanilla bean in the mix and swirl in unadulterated Dulce de Leche at the end. It's nearly perfect.

Now it needs a crunch.

I don't need to mix it in, a topping is fine. I want it salty; I'm thinking of how much I love a good salted caramel. I don't want it to melt salty in the ice cream or on the tongue. I want crunchy salt (Maldon) so encapsulated in hard caramel that you don't experience salt until after the crunch.

My plan at this point is to make dry caramel as per the instructions of David Lebovitz (thanks Allison), mixing Maldon salt in at just the last possible second, much like making a praline, but with salt instead of nuts.

Since we're just speaking of salt and sugar, normally I would just jump into experimentation on something like this, but I'm down to my last few ounces of mail-order Maldon. I want some assurance that I'm on the right track before I risk the last of an ingredient particularly precious to me. It may be months before I see it again.

Can this possibly work?

Any other great ideas?

Thank you, all of you, who contributed by answers or comments to the thinking that leads now to this answer. I listened to all of you, and it worked. I can't describe how tickled I am. Your suggestions opened my mind to thinking that this could still "work" even if it didn't quite go as I had hoped. As it turned out, the end product exceeded my hopes.

This is my soon-to-be-world-famous Dulce de Leche ice cream. Two nights ago I froze a batch with my new caramelized salt. It wasn't my intention to create a swirl-in, but once I had the candy, I had to try it that way. 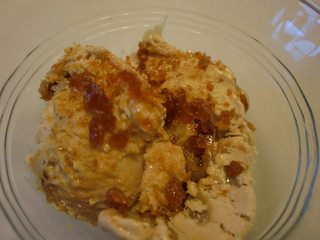 Just before snapping the picture, I sprinkled some of the candy on top. Then I took a bite. HOLY COW!

The candy hits the tongue as just sweet. Then it morphs. In less than a second you start to get the bitter notes of dark caramel, then BAM it hits with salt. It ends salty and sweet, with the bitterness just a memory. By then, you've already got your next bite ready, as in, "What the hell just happened?" Paired with the very one-note sweetness of the Dulce de Leche, the multitudinous flavor bursts of this little crunch are phenomenal.

Are you reading into this that I'm a little excited right about now?

The candy that was swirled into the ice cream did NOT make the surrounding ice cream salty. It just swirled in, but kept its own character, albeit stickier and less (but still) crunchy. It's a great contrast to the creamy Dulce de Leche.

I discussed this small triumph in chat before posting this answer. Logophobe immediately jumped to using the "dust" (I'll show you that in a bit) to rim margarita glasses. The "margaritas" would be made with this. Oh hell yeah.

How about as a pork rub? Hell, HELL yeah!

The possibilities for this stuff are endless. 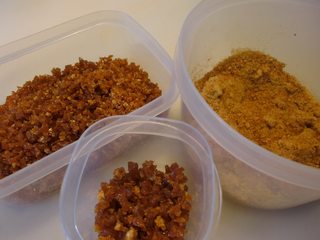 I hope by now you're intrigued enough that you want your own caramelized salt to play with.

I basically stuck with my original plan, but I didn't use Maldon; I used inexpensive large crystal (rock) sea salt, like you might put into a grinder.

First, I just made a dry caramel as per David Lebovitz using 1/2 cup (100g) of plain granulated sugar. I took his advice and brought the caramel to a darker point (closer to burnt) than I might have otherwise. 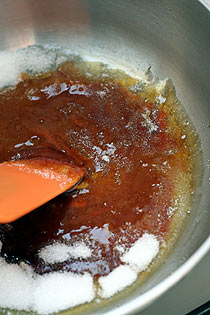 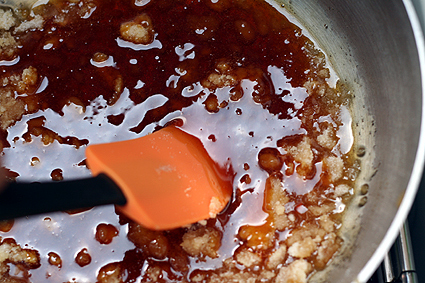 (Mr. Lebovitz' photos, not mine)

At just the very last possible second, I stirred in 100g of rock salt and poured that onto a greased sheet pan. After it cooled, it looked like this: 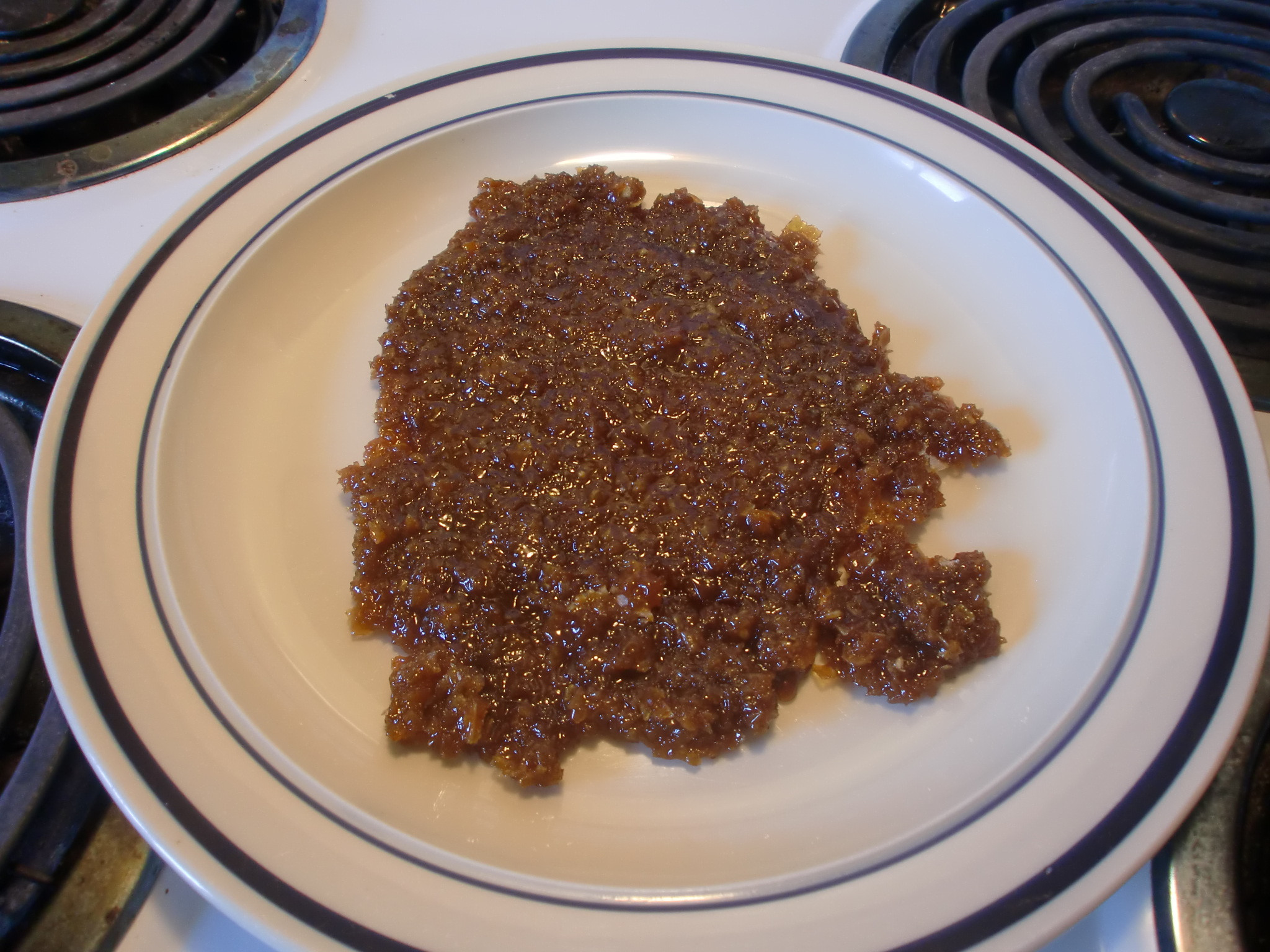 I broke off a tiny bit and tasted it. Too salty. I could barely discern any caramel at all. Hmmph. Well, I didn't expect this to go that easily.

What if I break this up into chunks and do it all over again? That might work...

So I broke it up and put it into a heavy Ziploc. Then I alarmed my neighbor (he called in panic) by beating the crap out of it with the smooth side of a meat mallet. 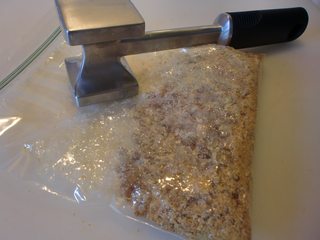 At the last possible second I stirred in my salty sugar chunks and poured the mix onto the same greased sheet pan. I was hoping that this time would maintain the clumpy appearance of the last. It didn't; it immediately homogenized into a fairly smooth mass. 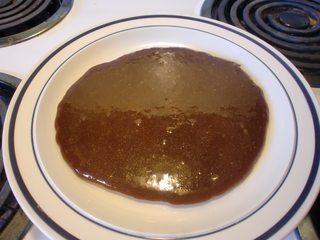 At this point I didn't have great hopes, but I figured I'd see if I could make anything useful out of this. I called my neighbor to warn him, then I proceeded again to beat the crap out of it. 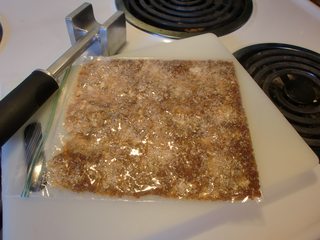 At this point I tasted it and kind of liked it, but the sizes of the pieces were all over the map. I didn't like that. I also didn't like the way it looked; the dust marred the glassy appearance of the larger shards.

So I grabbed three sieves of varying fineness and proceeded to work the candy through the holes. Anything that went through the fine sieve I called "fairy dust". By spending some time working out the "dust" I was left with larger, cleaner shards. I worked those through a pasta colander, then a big pasta colander. 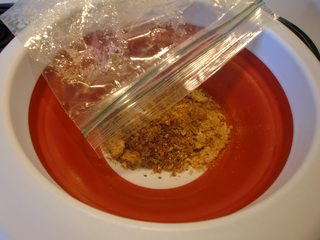 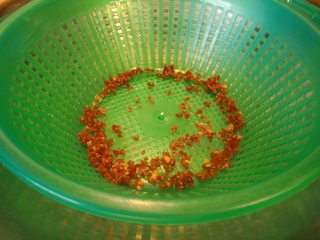 The first time around, anything too big to make it through the the big holes of the big colander got put back in a Ziploc and beat up again. That gave me more "fairy dust" and more medium shards. The second time around, the shards that wouldn't go through were small enough that they might make a nice garnish - 2 or 3 pieces on top of the ice cream. So I kept them. It was a good call, they're fun.

Swirled into the ice cream, I used the dust and medium shards. The dust dissolves, but it stays to itself. It doesn't make the ice cream next to it salty. The medium shards maintain their integrity, they don't completely dissolve, they provide some crunch. The big chunks look awesome as a garnish and since they stay in the mouth long enough to savor, you can really pick up their complexity.

I didn't get the encapsulation effect I was looking for, but in the end, I couldn't be happier with how this turned out.

Next time I'm going to try just doing it in one step using regular kosher salt. It might work, but I'm guessing that it won't be the same. We'll see.

If you're willing to add a soft texture, you can make a soft-ball caramel and knead the salt into that. Then freeze the 'dough' and shatter it with a chef's hammer. If you dip that in the dry caramel, it should buffer the salt and keep it from dissolving before your shell hardens. You can also do this with fondant or ganache or the like, if you're looking for a salty flavour on top of the salt.

If you and don't care about the salt's texture you could try making the shell in two batches. Dissolve the salt into one batch, shatter that, and coat the pieces with the second batch.

Another way would be to borrow a technique used by makers of jawbreakers and pyrotechnics: Coating a seed with powder

Stick with me, we'll carmelize it later ...

In a rotating can at least six inches across and six inches deep at about a 30 degree angle, with one side open, put 1 Tb salt and 1/2 cup powdered sugar in and start rotating the can not quite fast enough to carry the powder all the way around the drum--it needs to fall back down

With a fine mister, spray some water into the open end of the drum, this will initiate the seeds being coated with sugar. Wait a minute. Repeat spray/wait cycle until grains are ... big enough.

Sift grains out with a colander, spread on parchment paper on a baking sheet, ... maybe 10 minutes, dunno, and grains should be nice and brown and have a nice grain of salt in them.

I don't know if it's a GREAT idea, but it's a completely different kind of approach that introduces another technique not commonly used in the kitchen.

Lightly whip egg whites until just barely frothy. toss the salt crystals into the egg whites. strain them out and add them directly to regular sugar. shake off excess sugar as needed. place on silpat/nonstick. put into oven on the lowest possible setting with door cracked over night. in fact a dead oven with residual heat is better. the crystals will naturally dehydrate and the next day you will have candied salt. this technique works with herbs, edible flowers etc.

you could even make a dry caramel and pulse into same consistency as sugar and use instead of regular sugar; adding that caramel note you are seeking

Not the answer you're looking for? Browse other questions tagged salt candy or ask your own question.

4
DIY Finishing Salt (Maldon, Fleur de Sel)
8
Is it possible to make caramel that does not taste sweet?

5
Hard Candy Hardens Too Quickly
9
How can you pipe hot melted candy into free-form shapes?
5
Does candy expire?
2
Softening nougat candy
8
Can I candy pomegranate?
10
How Much Ammonium Chloride for Home-made Salt Licorice?
3
How are you supposed to eat ribbon candy?