I have fallen in love with Dulce de Leche, which I make by long boiling unopened cans of sweetened condensed milk.

I've heard wonderful things about Cajeta, the same thing but made with goat's milk.

I want to try it. Alas, sweetened condensed goat's milk doesn't seem to be something I can get a hold of. I have been able to find recipes, like this one for Cajeta or Dulce de Leche that start with whole fresh milk (cow's or goat's). I'd do that, but I can't find find fresh goat's milk around here.

That leaves me with powdered or evaporated goat's milk (full-fat).

Especially after reading SAJ's answer here: Can evaporated milk be converted to "regular" milk?, I don't doubt that either of these products would work if I reconstitute them first with water, and then follow the recipe as if I had whole fresh goat's milk. Is there anything I should consider when choosing powdered vs evaporated?

Finally, can using canned or powdered milk for Dulce de Leche or Cajita speed up the condensing process by starting with less water (or even none in the case of evaporated) than I would use to fully reconstitute the milk? But still optimally caramelize the sugars?

EDIT Well, with no answers so far, and not being able to find any, I'm trying it tomorrow with evaporated, whole goat's milk I bought today. I have 2 cans, 12oz (355ml) each. They are double strength, so I would add 2 cans of water to make full strength goat's milk. I'm going to try it, but only add 1 can of water. I'll add the sugar, salt and baking soda according to the above recipe as if I had 48oz of milk, but in fact I will only have 36oz of liquid. So I'll multiply the other ingredients by 1.5. If all goes well, I should end up with just over 1 1/2 cups of Cajeta. As of this writing there is still time to stop me if you have reason to believe it won't work.

Yes, evaporated goat's milk works just fine in Cajeta and you can start with at least 50% less water than you would use to fully reconstitute the milk.

That being the case, powdered goat's milk would probably work just the same way, but that has not (yet) been tested.

I did it again using slightly more than 50% of the water that would be required to fully reconstitute the milk, and the process was smoother. I mention in the text below that I would try it with 2 tablespoons more water next time. That is the way to go; it worked better.

Optional (I used both)

Or if you're made of money

Adapted from Smitten Kitchen, who adapted loosely from Rick Bayless 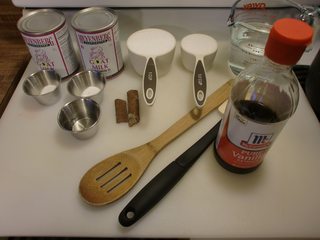 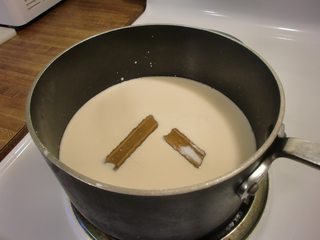 Everything but the baking soda and vanilla went into the pot and was brought to a simmer. 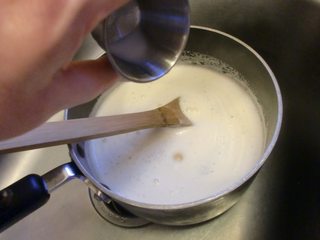 Now this is kind of funny. I carefully measured 3/8 tsp of baking soda and mixed in the the little custard cup with a TBS of water. When I went to pour it in, half the baking soda stayed in the cup. 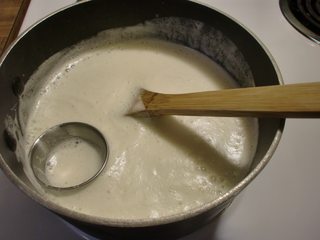 Screw it. The cup is stainless steel and I have to dig out the cinnamon sticks anyway.

Now it's just a matter of simmering, and stirring. And tasting, lots of tasting, tasting is very important. Did I mention tasting?

As the caramel thickened, it needed a lot of stirring, a lot of scraping. Towards the end it was tricky to stop stirring long enough to taste, but I managed.

It took about an hour and a half to get from simmering milk to dealing with thickening caramel. The last stage of constant stirring lasted about half an hour.

With practice I'm sure I could get the whole operation in under an hour, I was just very conservative with the temperature 'cause I've seen way too many pots of dairy boil over. With all this sugar, that is one mess I did not want to deal with.

I stirred in the vanilla just before I pulled the pan off the heat.

Well, I patted myself on the back for creating my first Cajeta. Both of the recipes I looked at while developing this recommend straining the warm caramel, and I can see why, it definitely has specks of darker and harder stuff. But, this particular batch of Cajeta has a destiny, it's going to be cooked in a custard base for ice cream. That custard gets strained twice, and it will be whole lot easier to strain that than it would be to strain this sticky stuff.

So it's done, and it's absolutely delicious, but I have one more cool thing to share with you.

I've been making (perfecting) this ice cream for a while. I've been starting with two cans of sweetened condensed milk turned into Dulce de Leche. One can goes into the ice cream base, the other goes into a Ziploc baggie. I snip off a corner and use the baggie like a pastry bag as I'm packing the ice cream into its container. Then I get the swirls of Dulce de Leche. Of course I only use like a quarter or a third of it. So to store the remainder, I just squoodge the caramel away from the corner and fold it over. No mess, no fuss. So....

Lookie there, 14.85oz. Perfect for a batch of ice cream. (minus 4.75 grams for the bag, but who's counting?) Putting it the baggie allowed me to get a volumetric measurement too, by displacement of water in a measuring cup. It was pretty darn close to exactly what I expected it to be, 1 1/2 cups.

The caramel is a wee bit hard, I'll know better next time and take it off the heat a few minutes sooner. If it's difficult to deal with cold, I can just drop the whole baggie into almost simmering water for a while. Or I can just cut off the bag. Chilled, I think it'll just peel away from the bag in one piece. I can just drop the chunk into the simmering milk and mix it in before adding the eggs to my ice cream base.

Not the answer you're looking for? Browse other questions tagged milk dulce-de-leche or ask your own question.

9
How to change the texture on dulce de leche?
5
How can I improve rich taste of spiced milk tea?
5
What causes curding in this case: heating milk with large quantities of sugar
5
Is condensed milk the same as sweetened condensed milk?
1
Making my cocoa mix into instant cocoa mix
5
RPM for milk frothing?
9
Can you make caramel with evaporated milk?
2
Dulce De leche as a macaron filling
2
The Perfect Smoothie - Liquid Milk versus Powdered Milk