Why is supermarket bread soft?

Nearly all "good" bread (from a traditional bakery, made at home by a competent baker) comes with a thick, hard crust. However in every supermarket there are shelves and shelves full of soft (white, brown and everything in between) bread. I want to know how they make such soft crusted bread, and why do they do it?

Is it much cheaper to produce soft bread on a large scale? I've noticed this kind of bread does not go stale, instead it eventually starts going mouldy (my homemade bread goes stale and loses all moisture before mould gets a chance to set in), is this related to the softness, or is this a separate phenomenon due to added preservatives? When did the public start demanding this kind of bread, and why did they move away from the more traditional crusty bread?

I don't know much of the science behind the super-soft bread on supermarket shelves, but I can give some insight into the history that led to it becoming so ubiquitous in the US.

The idea that whiter breads are classier than darker breads goes all the way back to the 5th century BC.

The belief that white bread was superior to dark bread, a common theme in many cultures over the ages, was already taking hold in Greece by the 5th century BC. Darker, denser breads made from barley or rye were the breads of the poor. White breads were believed to be pure, more refined, more cultured. They cost more too, since growing wheat was more labor-intensive than other grains. And on top of that, removing the bran and the germ to make wheat flour white instead of brown increased the work and the cost still further. Interestingly, up until the 17th century there were even separate baker's guilds for bakers of white breads and brown breads. This prejudice against darker breads generally continued all the way until the 1960's, when growing health consciousness finally seemed to turn the tide.

The desire for soft came a bit later (same source):

I've often wondered why bread baking in this country-descended as it is from the great European traditions-turned so . . . let's say. . . soft. The decline of good bread baking may have had its roots in the 18th century. The introduction of pan baking made bread softer and puffier. In the 19th century a distaste for "sourness" (ironically the same "sourness" that makes San Francisco sourdough and other sourdoughs so great) led to the introduction of baking soda to bread, which made it puffier still. In the 1870's industrial milling techniques were introduced. Flour became whiter and whiter, and "deader"-bakers began adding sugar to get yeasts to react as they had in the past, and bread got puffier still. Bread continued to get sweeter and puffier, until finally in the 1920's, we reached the pinnacle of puffiness-Wonder Bread.

It's with the birth of Wonder Bread things really take a turn for the insiped. Did you know you can squeeze an entire loaf into a ball the size of a tennis ball? I once know a guy who never missed an opportunity to show off that little stupid-human-trick...but I digress...

At first he zeroed in on the large number of German immigrants in the area, and prior to WWI he advertised heavily in German language newspapers using a Puritan logo: 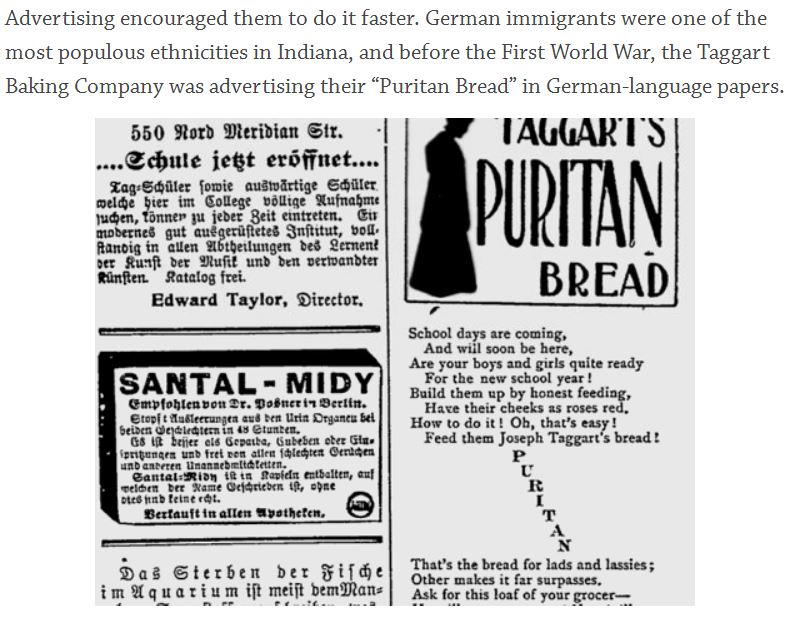 This was a good time to own a baking company in the USA. Between the start of the century and the end of WWI, the market was burgeoning.

between 1899 and 1919 the value of bread and bakery products produced in Indiana grew 620%. Americans were rapidly growing richer, and they could afford to replace labor-intensive homemade goods with manufactured alternatives. -Cluster Mag

But events of the era were causing a shift in the attitudes of American consumers. The war and its aftermath caused a tremendous amount of discrimination against German immigrants, and in Indiana, Germans were plentiful enough that there was a significant backlash to those attitudes. To make matters worse, Protestants in Indiana were banding together against Catholics, and the KKK was getting hugely powerful in state politics (an interesting bit of history in its own right Wiki-Indiana Klan). Our marketing genius knew just how to capitalize on the social unrest.

In 1921 the Taggart Company had a new wrapping technique that could keep bread fresh for several days, and set about to rebrand the product.The new Taggart bread wouldn’t carry religious or ethnic connotations that could hinder it’s sales, or even falsely identify itself with the work of Puritan mothers – it was going to be better. It was going to be from the mechanized world of the future, a utopian world with factories suspended from the clouds by the thread of their smoke; bridges with the leap of gymnasts… and the gliding flight of aeroplanes whose propellers sound like the flapping of a flag and the applause of enthusiastic crowds – a vision outlined in Filippo Marinetti’s Futurist Manifesto, published in 1909.

The new Wonder Bread didn’t suggest hearth and home. On the contrary, the unnaturally vibrant colors of the logo and visual purity of this new, virgin white, 1.5 pound loaf perfectly evoked the otherworldliness of the enormous manufacturing system that was seen as America’s future. -Cluster Mag

It was the right place and right time for the birth of a product so lacking in character that its very name has become synonymous with lackluster conformity. Wonder Bread's timing was more fortuitous (for them) than even they knew at the time. 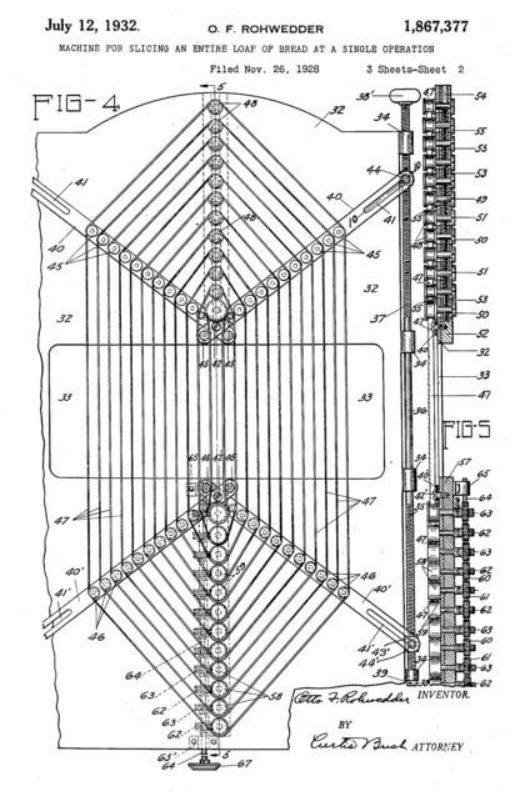 The new invention was first used by Chillicothe Baking Company, in Chillicothe, Missouri, for their Kleen Maid sliced bread. But it was Wonder Bread (now owned by Continental Baking) that took it nationwide in 1930. Consumers were intrigued by pre-sliced bread, but were concerned that it would quickly go stale. HA! Wonder Bread, the amazing never-staling bread. How perfect is that?? Incidentally, for a time during WWII commercial bread slicing was banned (only whole loaves could be found on store shelves) due to the steel shortage. The ban caused such outrage that it was lifted only two months later.

During the 1940s it was becoming clear that by being so nutritionally bankrupt, Wonder Bread and its clones were actually causing great harm to the health of the American public. Wonder bread became "enriched" as a part of a government sponsored program to combat certain diseases. It worked, incidents of Beriberi and Pellagra were quickly significantly reduced. Never slow to take advantage of a good marketing angle, Wonder Bread was now advertised as a health food. "Wonder Bread builds strong bodies 8 ways. Look for the red, yellow and blue balloons printed on the wrapper!"

Once again, the marketing worked.

during the late '50s and early '60s, Americans ate a lot of it. Across race, class, and generational divides, Americans consumed an average of a pound and a half of white bread per person, every week. Indeed, until the late '60s, Americans got from 25 to 30 percent of their daily calories from the stuff, more than from any other single item in their diet (and far more than any single item contributes to the American diet today—even high-fructose corn syrup).

Thankfully, the trend is reversing. Wonder Bread, the big daddy of them all, has been in financial difficulty for 20 years.

Whole grain breads are just now starting to outsell white bread (by dollar amount), and have nearly closed the gap by unit.

From The Whole Grains Council

The tastes of the American public are fickle, but those Taggarts are wily. They always come always come out smelling like a rose. 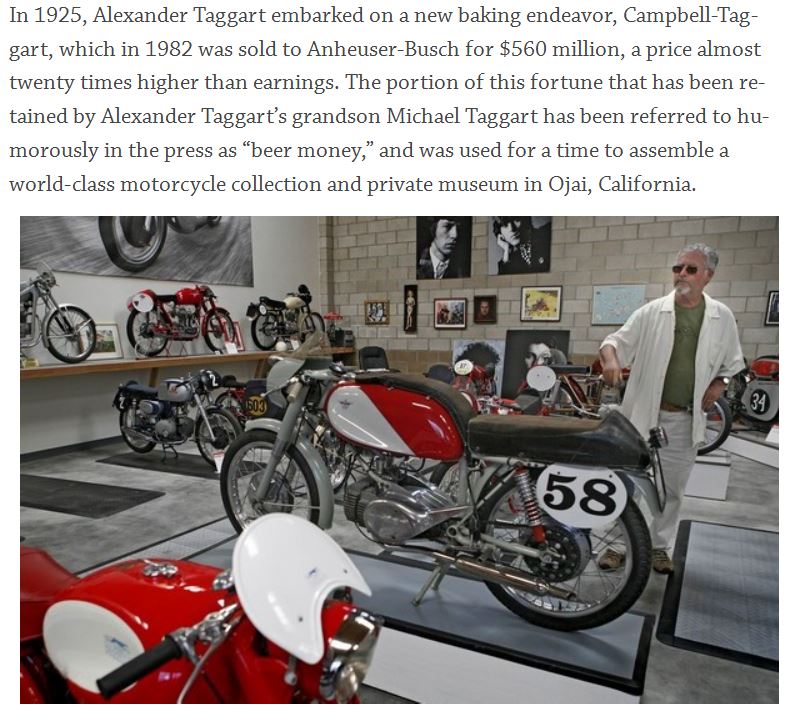 Its the Chorleywood bread process, with fast warm rising in a warm room, and steam baking.

I remember, over 60 years ago, my mother complaining about how soft the bread from the supermarket was ever since they installed steam ovens to replace the old coal-fired dry heat ones.

As a home baker of "artisan" bread, I'm constantly looking for ways to improve crust and crumb. Which has lead me to research quite a few things. In addition, my son was a supermarket bread baker, so I gave him a call.

Here's his feedback...(he does not think very highly of the product) The dough comes frozen to the store. It is thawed and then the bread is proofed for an hour @ 110 degrees F and 80% humidity.

The bread bakes for 25 min, and the first 10 minutes is with steam. The steam makes the crust rubbery (his word - he also said "it just bends under a bread knife when it first comes out").

It's cheap bread. < end of his comments >

My experience is that storing even the crunchiest crusted bread in a plastic bag will soften it. I don't have a steam oven so I bake in a Dutch oven and remove the lid after 20 min. I don't think steam is bad, I think it's good. I suspect that short fermentation and fast rise/cook times contributes to the "supermarket quality."

Whys and how's? Here are a couple links to sites I use for research:

When you talk about bread in (plastic)bags:

The bread often will be wrapped by the manufacturer before it's cold(they do it to save time and storage-capacity, so it's cheaper).

When it happens(when the bread is really fresh you may notice water-drops inside the packaging) there will be a high humidity inside. The humidity will soften the crust and force the creation of mould.

It's industrial production meaning they use a tonne of dough conditioners, relaxants and other chemicals to obtain the longer, softer shelf life. The ingredient additions alongside product and packaging testing create this soft, shelf-stable product.

The soft crappy American bread is due to the processed flour used in the USA. To make a good 'European' loaf one needs to obtain flour as used in Europe. The chemicals used to grow and preserve US wheat, some of which are banned in Europe and other countries is the reason for the soft tasteless bread consumed by Americans.

Not the answer you're looking for? Browse other questions tagged baking bread history or ask your own question.

5
Why do crisp bread rolls have more water than soft bread rolls?
2
Bread crusty outside and super soft inside
2
cake smells bad of egg, is dense and rubbery
2
Artisan sourdough bread
5
How can I make a soft Turkish bread?
5
Very very soft bread
2
How to make croutons crunchier throughout without burning?
2
Why are bread pans rectangular?