Any suggestions for cracking “black walnuts”?

These nuts have a very tough outer shell, any tips on cracking them?

When I was a kid, we used to run over them with the car. Put a bunch in the driveway and drive over them so they got a single pass from a tire. That usually crushed a few beyond help, but just split the majority open nicely. They were still a lot of trouble to pick from the hulls, and ultimately not very nice to eat, IMO.

A nutcracker won't work. I've used a hammer with success. Place the pointed end up on a hard surface and whack with the hammer. Practice will teach you how hard you need to swing.

We had a black walnut tree at one of the homes where I grew up. Hopefully, you're not working from this state, or you'll have to remove the husk as well, which will stain your hands for months. (wear gloves, and don't take them off, until you've cleaned everything). We'd collect them up, and let them sit for a few weeks in the garage (warning : they stink when they're in the husk; my mom tended to deal with the husks, and it was years ago, so I'm not sure what technique she used.

For cracking, I preferred using a bench-mounted screw-drive vice. I've also used a heavy-duty C-clamp in the early days, but you almost need three hands to deal with things. They do make special screw drive nutcrackers for macadamia nuts, which are easier to use (the screw comes through the middle) but they don't tend to be large (or heavy) enough to deal with black walnuts. You might be able to get away with large vice-clamps. (size it to the nut, remove it, give it a few twists to constrict it, then clamp again on the nut)

There are also nut crackers specifically built/rated for black walnuts, but I've never used them. If you're going to use a hammer, it might be worth investing in an engineers hammer, aka a hand sledge, which are heavier, and have a larger face.

My brother-in-law always has a giant bowl of assorted nuts on the table, he uses a grip wrench like the one below. It is easy to adjust the wrench for all sorts of nuts and it isn't that difficult to use. Also, it doesn't make the shell pieces fly when the nut is cracked if you do it correctly. 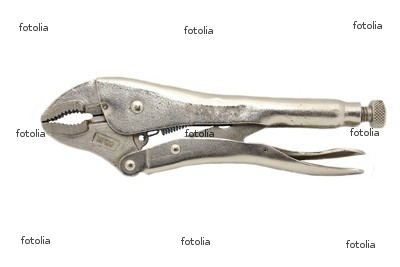 As already mentioned, a bench vise works pretty well. If you want to go that route, be sure to cover the floor under the bench with plastic or similar. Otherwise residual juice from the husks will stain the floor dark brown.

I crack and retrieve the nutmeat from black walnuts and shagbark hickory nuts in the following way:

I place the nut, point up, on a piece of railroad rail. I hit it with a hammer just hard enough for the nut to break in half and sometimes into quarters. I then use a pair of sidecutters (smaller ones for the hickory nuts) to cut the pieces of nutmeat out of the shell.

Using this method may take a little longer, but you get larger pieces of nutmeat and fewer pieces of shell in with the nutmeat. Using a nutpick mashes and tares up the nutmeat. This is the best method I have found for me. Try it you may like it.

when I was young , I found that an old iron-iron upside down between your legs work quite well,

Growing up we had 5 huge black walnut trees. My grandmother used a hammer and an ice pick. I don't recommend this method though. So far for me its pretty much a toss up between a vice out in the barn or driving over them all with a car. The car is much faster and generally only pulverizes a minute few.

I found that a G-CLAMP is also a good tool for opening walnuts and macadamia nuts, the slow and steady addition of pressure makes a neat crack rather than the whoomp force of a blow from a hammer.

The best way to crack black walnuts to extract the nut in the largest pieces is to use a workbench vise and a short well 17mm or 19mm socket (5/8's or 3/4" S.A.E.) from a socket and ratchet tool set. A 12 point socket is better because it's more "open" inside than a 6 point socket. The key is to use the socket to break the "crown" of the nut on either end. The best way to do this is to put one of the pointed ends of the nut in the open end of the socket where the bolt would go. Hold the walnut and the socket together with your hand and put it in your opened vice. Hold your hand around the nut and the socket while you crank the vice down on your nut socket combination so you can feel the socket break the crown of the nut. (Hopefully you're not one of those who need someone to tell you not to crank the vice down so far that you destroy the nut and hurt your hand. This method is only good for people who haven't left all their common sense behind in college.) With the crown of the nut broken, you can now pick out most of the big pieces of walnut. If a quadrant of the nut didn't get cracked in the process, my preferred method is to use a a good pair of side cutters to get at it. Works better than any method I've tried.

A pair of diagonal wire cutters will quickly open a black walnut. Just cut along either end parallel to the seam. This easily splits the nut in half. Then, use the wirecutters to divide the shell edge about halfway down. This often splits it completely letting you pull the two halves apart and remove the nutmeat. If not, a few more clips will do the trick. Once youve done a few, it becomes pretty obvious where to cut the shell.

After you cut it in half, put your hand over the piece you're cutting. This prevents fragments from scattering.

After extracting the 'meat'(kernel) from the shell of the Black Walnut, there is alot of debris(from the shell) mixed in with the precious 'meat'.
Previously, visually. . .I carefully removed 3-5 small slivers of shell from about 1/2 cup of Black Walnut 'meat'. An old Cherokee trick is to place the 1/2 cup of Black Walnut 'meat' in a pot of warm water and the lighter 'meat' will rise to the surface while the heavier shell-slivers will sink. Works!
True, the shell-slivers were accompanied by the huge pieces of 'meat'. However, that was fine since we are looking at 2-3 really-really large kernels. Using a strainer I can easily remove all the light 'meat'(kernels).

Not the answer you're looking for? Browse other questions tagged nuts or ask your own question.

17
how to grind pistachio nuts so that they stay dry
9
Cracking open a pistachio
10
What is the inside of a nut called?
6
Is it true that good pistachio nuts should have yellowish shell, purplish skin and greenish flesh?
2
Cracking almonds without a nutcracker?
1
Will roasted pistachio nuts keep well in freezer?
3
Which nuts can be cracked without tools?
5
How do you eat this type of Gingko nut?
9
How can I quickly shell pine nuts?
5
How to crack walnuts?