I caught 4 small shore crabs (green crabs) yesterday and took them home to eat. They were alive in the bag until I got home and I out them straight into the freezer (no cleaning or boiling etc). They are now frozen. I have read some articles about if you don't clean them etc and they die before you cook them, they become very poisonous. Can I still cook and eat them or are they now not edible?

From what I have found so far, Green Crabs (as found on the coasts of the US) are not usually considered good eating, although they are edible. The same species is considered an important food source in parts of Europe. I'm still trying to get reliable info to sort that out.

According to The Washington Department of Fish and Wildlife "Although most crabs are either alive or have been killed just prior to cooking, they certainly are safe to use if you know they are fresh, i.e., dead for only a few hours." But that source does not address freezing of live crabs. The Louisiana Seafood Bible - Crabs says that it's safe to freeze live Blue Crabs if you are sure that the were in fact alive when first put in the freezer. I can't find anything that specifically addresses the safety of frozen, uncleaned Green Crabs, but I also can't find anything that suggests that Green Crabs would be any different than Blue Crabs in that regard. At any rate, cooking and cleaning live or just killed crabs is definitely preferred for quality, regardless of the species.

If you're in the US (or anyplace other than the shores of the North-east Atlantic Ocean or Baltic Sea, for that matter), don't lose any sleep if it turns out that you harvested them for no good reason:

Carcinus maenas is a common littoral crab, and an important invasive species, listed among the 100 "world's worst alien invasive species". It is native to the north-east Atlantic Ocean and Baltic Sea, but has colonized similar habitats in Australia, South Africa, South America and both Atlantic and Pacific coasts of North America. It grows to a carapace width of 90 millimeters (3.5 in), and feeds on a variety of molluscs, worms and small crustaceans, potentially impacting a number of fisheries. Its successful dispersion has occurred via a variety of mechanisms, such as on ships' hulls, packing materials, bivalves moved for aquaculture, and rafting. 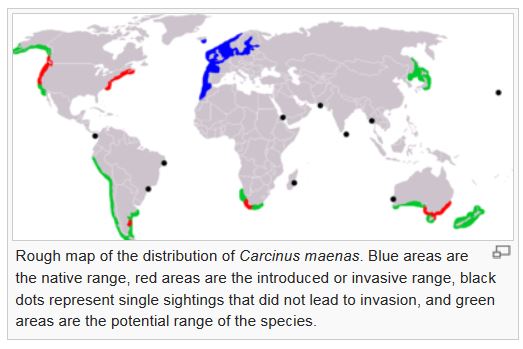 They're so invasive and detrimental where they don't belong that Massachusetts has paid for crab bounty hunters, and Washington and Oregon ask that any Green Crabs found be brought to Fish and Game authorities, so their invasion can be monitored and hopefully stemmed.

Not the answer you're looking for? Browse other questions tagged crab or ask your own question.

5
How do you prepare Soft Shell Crabs?
1
What are the culinary differences between Chinese Mitten Crabs and Blue Crabs?
2
Do leech eggs on crabs harm humans?