Is there such a thing as a bone cleaver?

When I was growing up, my mother had a massive, MASSIVE cleaver that she kept in the kitchen. It was immense and heavy. My father had gotten it when he worked in a butchery. This cleaver has since been lost to us. I would like to find something similar. When I asked her what the specific type of knife was, she said it was a "bone cleaver." It was easily 60 years old when I was little 30 years ago.

My mom used to use it expressly for cutting through bone. You'd raise it up, give it a little force to accompany it's natural weight, and it could go through almost anything with relative ease (up to and including femurs).

I know bone saws exist, and usually I just keep a spare blade around for my hacksaw to cut through bone when I break down a carcass. So, is there such a thing as a bone cleaver? Would it be a special order thing these days? I'm wondering if it may have been a custom made knife back then because I have never seen anything else like it.

I have this one here: J.A. Henckels International Classic 6-inch Cleaver ... it is billed as being designed "for chopping through joints and bones". These cleavers tend to have good, solid weight and a short blade bevel to give it endurance and power. You would not slice things with this. This is a momentum tool to crash through the target tissues with a confident swing. The hacksaw that you mention offers better control, in general.

The opposite of this is an Asian style cleaver that is used primarily for vegetables. Lighter, faster blade with a deeper bevel which makes it sharper for slicing but it would wear down faster under the impact of bones/joints.

To add to the existing comments and answer. There are absolutely bone cleavers. The Chinese are very fond of cleavers. While, most commonly found Chinese cleavers that you'll find are "vegetable knives", they also make bone cleavers. If you have a chinatown or a asian restaurant supply store near you, you can probably find one for cheap. I have really nice Japanese chef's knives but see no reason to pay lots for a bone cleaver. I have one that cost me probably $20. I also have an good vegetable cleaver handed down to me, but that one doesn't get used on bones.

http://www.chefknivestogo.com/cckcleaver.html This is billed as a "Rhino Cleaver" and is the biggest I've seen. If it's well balanced it would be a fantastic tool.

I have a cleaver that matches your spec's on your #1 choice, BUT the blade is about 4" (front) for veggie chopping and the rear 3" is a more fortified sharp blade angled section designed for bones. It has Chinese symbols so I don't know what brand it is. It works great, as I do not need/want a cleaver for each. 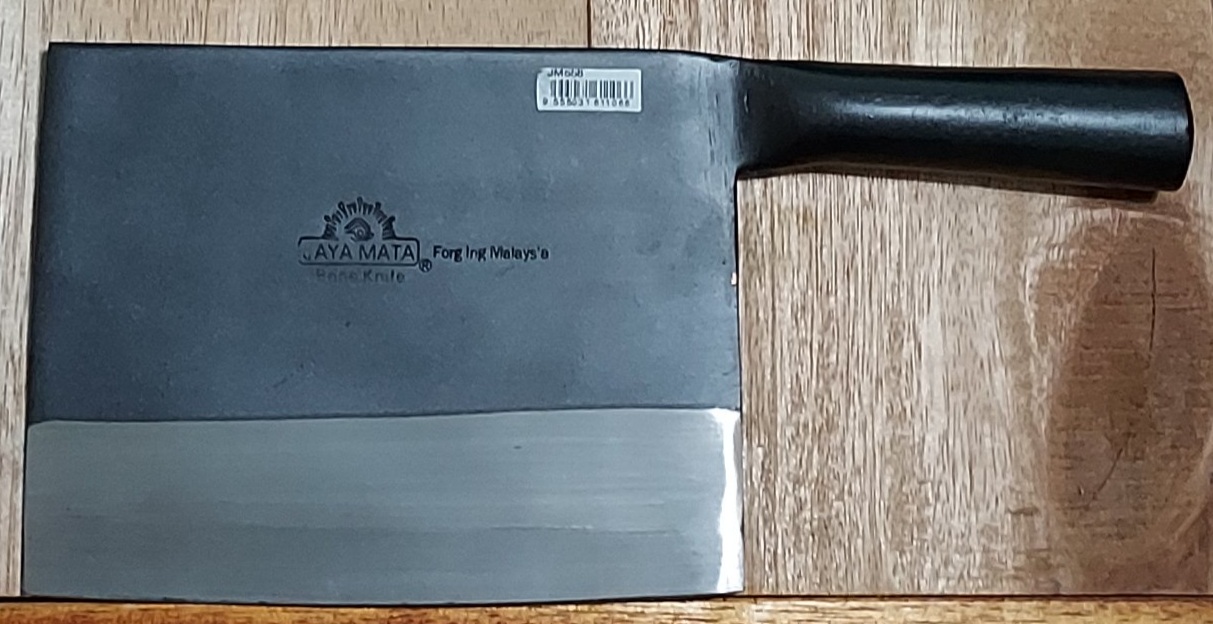 This one is a bone cleaver from Malaysia. Weigh approximately 1.6 Kilogram. Length of blade is 8 inches and height is 6 inches with the handle being 5 inches and a half. Most importantly blade thickness is approximately 1.3 centimeter. Made with soft steel with dull chopping edge. Essentially stated as a bone chopper.

https://www.amazon.com/Sato-Heavy-Duty-Cleaver-Chopping-Butcher/dp/B016E3RGMQ this can chop bones as it say so in amazon as some already showed you but the link is for amazon if u still wanted to buy one. here are more links to other one https://www.chefknivestogo.com/cckbonechopper.html

this one for sure will cop the bone as it did show it doing just that with pigs feet https://www.amazon.com/Cutting-Cleaver-Stainless-Chopping-Multipurpose/dp/B07QD7CPGT

this last one does not say if it can shop bone. but it look so cool that why i have add a link to it as well. https://www.amazon.com/gp/product/B07L8M41ZG

Not the answer you're looking for? Browse other questions tagged bones or ask your own question.

4
Which tools can be used to safely cut bone?

12
Knife chopping through bone or coconut
11
Soft bones in smoked chicken
6
Chicken: take meat off bone before or after cooking?
4
How to bone lamb breast
4
Sous Vide leg of lamb WITH bone?
13
Is there any advantage to cooking steak on the bone?
3
Can I make bone broth with bones without marrow?
9
What's the beef cut with solid, thick bone?
4
What to do with soft chicken bones after making bone broth?