How to see if cast iron cookware is enameled?

I have found a cast iron grill manufactured by the French company Le Creuset. This cookware is probably around 20 years old and you can see a picture of the same model below.

Today, all cast iron products from Le Creuset are enameled but I don't know if that was the case 20 years ago. The cookware is black and has been used a lot, so I don't know if the (quite) smooth aspect of the top is enameled or not.

Do you have any tricks to recognize if cast iron cookware is enameled or not?* 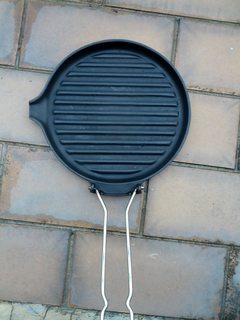 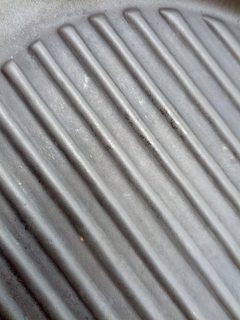 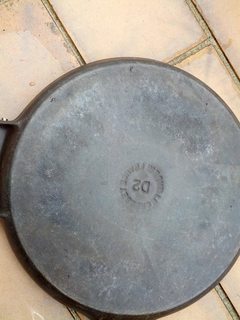 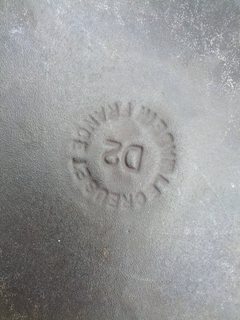 On this last one, you can see "Le Creuset * Made in France* D2" but I didn't find anything about D2 grill model on the internet.

Enamel is a ceramic coating applied to the metal - it will typically be colorful and glossy-smooth to the touch. Raw cast iron will be black and matte in appearance, the unseasoned surfaces rough to the touch, the seasoned cooking surface will be smooth and a tiny bit greasy. Complicating things is the "black satin" enamel some manufacturers (including Le Creuset) apply to some of their pans to mimic a well-seasoned raw cast iron pan.

From the photo, you have a raw cast iron grill pan - we can tell, as it has been misused and the seasoning mostly removed. The coloration, going from black to grey, almost white, indicates the early stages of oxidation and rough scrubbing, and parts of the raised grill-ridges have likewise been polished from rough use.

While enamel can stain and discolor from use (Le Creuset calls this a "patina"), it's failure state does not include a metallic shine in places, and does include cracking or flaking. The glossy black bits stuck to the ridges are seasoning, and ideally should cover most of the cooking surface - if it were uniform across the surface of the pan, it could be enamel. As is, it's a great raw cast-iron pan begging to be restored with a good cleaning and re-season.

We're going to do all of our analysis on the back side, so we don't mess up any cooking surface:

If you're still not sure after that, I guess post a picture, close up of the cleaned back side, with good lighting.

You can easily test whether a piece of cast iron is enameled or not with a multimeter. Set the meter to resistance measuring mode (e.g. on the megaohm range) and (carefully) stick the probes across the pan.

Bare cast iron is electrically conductive, and will have a resistance of close to 0 ohms. The enamel on an enameled cast iron pan is an insulator, and the resistance will be near infinite.

Of course, the seasoning on a cast iron pan may add some resistance. I tested this with an enameled pan (resistance >10MOhm) and a brand new bare cast iron pan which came "preseasoned" from the factory, which measured around 300 Ohms over a stretch of several centimeters. I suspect using sharp probes and digging into the metal a little bit would help lower the resistance, but that would damage the pan and just making gentle contact is enough to determine whether there is enamel or not.

Apply a really weak sheet magnet to the surface of the pan, like the ones that come attached to the phone book for hanging on your refrigerator. If it sticks, it's not an enameled surface. If it does not stick, there's a film of enamel there preventing it from doing so. Just be sure and test it first to make sure it sticks to the frig.

After seeing the pictures, I'm almost sure this is naked cast iron. "Almost", because I haven't seen the satin enamel after use, only on new pans. But when it's new, it's glossy like seasoning, not dull like what your pictures show.

For a confirmation, you can try to rust a small spot. Take a drop of acid - maybe essence of vinegar, or descaling agent - put it on the pan, and heat. If it changes or even rusts, it is unseasoned iron. This test won't work to distinguish between oil seasoning and enamel, but it should work on pure iron. But you'll have to derust it before seasoning again, so it may not be worth doing it.

Not the answer you're looking for? Browse other questions tagged cookware cast-iron seasoning or ask your own question.

0
is Le creuset pan 22 cms enamelled or not

19
Using cast iron on a glass range
4
Does cast iron have a coating from the manufacturer?
6
Rodent droppings on cast-iron frying pan
12
How do I clean my cast iron grill pan?
3
Can you safely use a cast-iron grill pan as a heat diffuser?
2
After full reseasoning of my cast iron, eggs are still sticking
2
Can cast iron with non-metal components be seasoned?
21
What are the advantages of seasoned cast iron vs enameled cast iron?
1
Ways for success on cast iron crepe pans without cooking spray