Baked item that would catch on fire/smoke?

This is an odd question. Are there any suggestions as to what baked items would catch on fire or smoke (possibly from being forgotten for a few extra minutes) and make a big mess?

I am researching baking information for a fiction story and have a baking disaster that needs to occur. I know alcohol and sugar will flame, but I'm uncertain if that would happen in a normally running oven.

By far the main way you make a smoking mess in your oven is by baking something in too small a vessel, so that it boils over and burns on the bottom of the oven. The actual food can be pretty much anything you want, as long as it has liquid. (Similarly, baking a cake in a springform pan that leaks around the bottom will tend to cause messes.) If you want actual flames, I'm guessing something greasy would do it, but I've never been crazy enough to try it. Alcohol does burn too, but you'll get much stronger flames from a grease fire.

Alternatively, you can set a lot of things on fire by leaving them under the broiler too long. A minute or two? Nicely browned. Five or ten minutes? Charred - and there'll probably have been flames if it was flammable.

Pizza disaster is a fairly common oven horror story. It involves placing a pizza directly on the oven rack, and then having it sag through the wires to burn on the bottom of the oven. Sadly, I'm not finding an easily uploadable image for this answer, but the result can be quite horrifying, and smoky.

This is probably obvious. In hindsight it was a thoughtless move:

When my wife and I first got married, I was broiling steaks in the oven.
I thought I would prepare my own glaze.
Bourbon glazes were all the rage at the time.
I think you can see where this is going.

To my defense, up until then I had never added alcohol to anything except for deglazing in a sauce.
So, since this question seems to serve as a general warning for when to look out for fire, also be careful when adding uncut wines and spirits (especially spirits).
I haven't tried to prepare a bourbon glaze since. I would do some thorough research if I intended to.

I once caused a fire in a comercial kitchen by refilling the deep fat fryer but only a little in the bottom I went to fetch some more oil when I came back it was on fire. Now the flames were very high but it was quite easy to put out with a fire blanket but for it to lead to a full scale inferno would be for someone yo attempt to extinguish the flames with water, it's important to point out that this person would likely be very badly burned. But the resultant fire along with buckets of old fat underneath the fryers would be the makings of a huge fire.

(Yes, this is from experience)

The scenario you specify isn't very likely to happen. The food in an oven has a very low temperature. A casserole or loaf of bread might get some surface charring after staying for too long in the oven, but it'll need at least half an hour above the normal time for somebody in the next room to notice the smell. And there won't be much smoke and certainly no fire.

A common kitchen scenario is to forget something on stovetop. There you have several nice possibilities, depending on the amount of damage or chaos you want in the scene. A pot of something high in sugars, like jam left to cook down or caramel in the making (before adding milk) will result in charred residue which will smoke and stink a lot, ruin any coating on the pot (enamel, non stick) and annoy the cook to no end, but won't do any damage outside of the pot, so it can be hidden after five minutes of airing the kitchen. Or you can have milk boil over, it will happen in mere seconds, then it will then stick to the stove and the residue will be very hard to clean. Note that if you specified "baking" because your character is working in a bakery or as a patisserie chef, he will still be heating milk, jam and caramel frequently.

If you want actual flames, there's nothing better than oil. It will need longer time to get to auto-ignition temperature, but if you have somebody deep frying stuff on stovetop, and the person is not so great at managing temperature, it can happen right in front of the cook, without any need for forgetting. With a gas stove and a pan full of hot oil, you can also have a spark getting into the pan without the need for badly controled temperature. This kind of grease fire is quite dangerous, and shouldn't be extinguished with water. 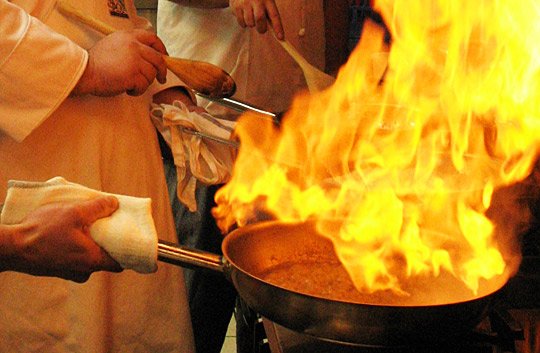 If it absolutely has to be an oven, you'll have better luck if it is happening in a restaurant. There, you can find pizza ovens going up to 450 Celsius, or even wood fired ovens which are much hotter. A rotisserie with open heat elements is also a candidate, if you let hot fat drip on the lower elements. In a home oven, a broiler will have enough temperature to burn something to the point of lots of smoke and charring, but I doubt that you will get flames. I think that a forgotten creme brulee will be very good for this scenario - the burning sugar will give you lots of stink, and it's done on a broiler by default.

There are also self cleaning ovens, and if your character forgets food inside the oven before turning the cleaning cycle on, it can cause a fire, and a dangerous one at that, because you can't open the oven to extinguish it before the cycle is over. But you need a very scatterbrained character to pull it off.

Not actually a food item, but I once set some parchment paper on fire in the oven while baking cookies. I cut the sheet too big and the extra paper (with no cookies) had some good flames and smoke going on...

I've had flare-ups when frying fatty sausages using a broiler or an electric grill in an oven in much the same way that you can get flare-ups on a barbecue. Oven fires can happen when fat builds up in an oven or broiler and hasn't been cleaned, it would be entirely plausible that someone could walk out of the room for a minute and come back to find their oven engulfed in flames if they fry lots of fatty food and don't clean their oven.

Would you consider a toaster, or toaster oven? Like a broiler, they have a nice combination of high temperatures in close proximity to food.

I once accidentally set a flour tortilla on fire (literal fire, with flames) while attempting to warm it in a toaster oven.

Not the answer you're looking for? Browse other questions tagged baking oven fire or ask your own question.

103
Why did my banana catch fire in the microwave?
10
How to cut a crumbly baked item (e.g. cereal bar) without it disintegrating?
12
Why Did This Cheesecake Catch on Fire?
2
Had a small oven fire, how do i get the smoke smell out of the oven?
5
Do breads always have to be baked in some vessels in an oven? If yes, then what shaped vessels would those be?
3
Will newspaper covering a cake pan catch fire in the oven?
7
Is it possible for a potato to catch fire after 10 minutes in the microwave?
2
How to avoid too hot pan that causes fire
2
Baked Potatoes Cooked Over a Fire
3
Why Did the Duchess Potato Collapse?