How to do English breakfast at home

I have been a week in London and I enjoyed the English breakfast: scrambled egg, bacon, sausage, toasted bread, warm tomato (I skipped the beans as I shouldn't eat them).

Now, how can I do it at home, in Italy (with local bacon and sausages), for a single serving? I really need a step by step comprehensive guide, as I tried to do a couple of time egg and bacon with an awful result. I assume that people doing it every day will know a lot of tips and secrets, such things that may seem obvious to you but are obscure to a foreign.

Of course, being a breakfast, it should be reasonably fast to prepare, so "logistic" tips are appreciated as well!

Great answers, thanks to all of you. I really appreciated (and upvoted) the step by step guide provided by Aaronut, but I market as accepted Sam's answer for its reference to Italian availability of ingredients.

I'm english. I mitigate timing issues by warming a pyrex dish or just a plate by keeping it under the pan I am grilling the stuff in (or in the oven on very low usually with the door open), then putting the bits that are cooked in the pan to keep warm. Generally this is because I'm doing it for more than I can do on the grill in a single sitting though, but it would work for single portions. I do this:

Grill (broil) your bacon (smoked back), sausages (pork) and tomato. Bacon should be flipped once, when the fat on the rind is just taking colour, sausages turned a few times, tomato should be halved and done cut side up.

whilst they are grilling prepare your scrambled eggs. Just mix 2-3 eggs a little in a bowl, no need to whisk to death, just mix till loosely combined. Add a little cream or milk if you want. whatever egg recipe flots your boat

The bacon will be done first (don't make it crispy - just a little colour on the fatty bits). remove it when done, and put on the warm plate under the grill pan to keep warm. Cover it with another plate or foil. When the sausages are nearly done, pop in your toast.

Then season with salt and pepper and cook your scrambled eggs. Again do this according to your favourite egg recipe, I melt butter in a non stick frying pan, add the eggs and stir with wooden spoon until set. some like the runnier than others. finish with a large knob of butter and check the seasoning.

toast, sausages and tomatoes should be done.

butter toast, put everything on a plate and eat with HP sauce and a hot cup of tea, no sugar, very little bit of milk, preferably from a pot of tea.

if you don't like the idea of timing the eggs/toast with the finishing of the sausage you can grill everything till done and keep it all on the warm plate in the oven/under the grill pan (not directly under the heat, but under the pan which is under the heat) whilst you make the eggs/toast/tea.

its not traditional, but I also like a slice of halloumi grilled with mine. maybe that's just me. 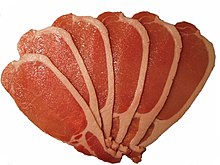 but some people will use streaky bacon (again smoked is better IMHO): 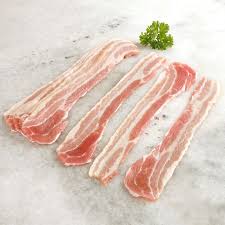 It probably unlikely that you will get back bacon in italy, so you next best bet is slices of (smoked) pancetta which is similar to streaky bacon. 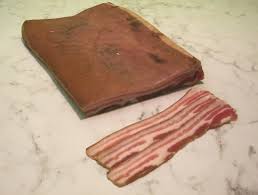 you might substitute a nice dry cured ham instead, but it won't be quite the same. though ham and eggs is a good breakfast.

If I understand correctly, you're hung up on two things, the first being timing and the second being specific preparations. So I'll tell you what I do; mine's ready in about 20 minutes and always comes out terrific.

And there you are. If you've followed all these steps correctly, you should already be able to feel your arteries hardening simply by looking at it. Serve with tea (if you're English) or coffee (if you're anyone else).

My routine, cooking for 2 :

Put sausages on grill, with the expectation they will take 15-20 minutes to cook through - I usually use a larger sausage (something like this from our local award winners).

Break 3 eggs in a jug or bowl and quickly stir with a fork (the aim is to scramble, not to create a perfectly even consistency). Warm butter in a pan. When the butter melts, lower the heat down to low, and add the eggs, stirring and folding them every minute or so. By cooking them slowly, you can stop the cooking when they are at your perfect consistency (I believe they should still be slightly runny). Adding milk or cream at the end helps this process.

I put the bacon on when there is about 10 minutes to go. The thinner the bacon, the less time it will need under the grill. I typically use a medium-to-thick-cut smoked back bacon, with relatively little fat.

At this point you should be turning the sausages & stirring the eggs. Turn the bacon once or twice during the cooking time.

At about 3 minutes to go panic, throw the bread into toaster.

Realise that the sausages are still not cooked through, and put everything into oven to keep warm while you carry on cooking.

Once cooked, quickly transfer the sausages and bacon onto kitchen roll to dry off excess grease/fat. I know the English Breakfast is traditionally known for being greasy, but personally I think there are enough fats in there without a coating of extra oil. Unless you are suffering from too much vino from the night before.

Options : The grilled tomato - slice in half and put under the grill when you have about 15 minutes to go.

Mushrooms - either small chopped button mushrooms, fried in butter, or a single large mushroom cooked under the grill (turned once)

Black Pudding (blood sausage/buristo/Biroldo) - this is more popular in the North. It differs from Italian and other European blood sausages by containing a lot of oatmeal. It can either be grilled (alongside your bacon) or fried for about 5 minutes. Personally, this is one of the highlights of a full English breakfast, but it is not a healthy option.

Beans - we are not allowed baked beans in my house, due to my fiancé's phobia.

I saw this Gordon Ramsey breakfast recently and it sounds like what you're looking for minus the sausage/bacon. The eggs are so artful. http://www.youtube.com/watch?v=WxV9QLuEwZo

If you are doing breakfast before going to work, you don't want to be watching the stuff cook on the stove - so I would make most of this stuff in the oven.

That might present a challenge in Italy, because many homes don't have ovens - but it is the leisurely way to do things when you want to get on with life at the same time as cooking, and it gives the least greasy product. It is also the slowest way to prepare breakfast, but it works.

Cooking is done on steel trays covered in aluminium foil, lightly smeared with rapeseed oil (Canola, as some people might say) or similar. Set the oven to about 180 degC. I like two trays, one is for sausages, mushrooms and tomatoes, the other for bacon and eggs.

You start with the sausages. Beginning from a cold oven, they take about 40 min, that's the length of the process. Put them on a tray, put the tray in the oven. Clean and chop mushrooms, make a mushroom "grab bag" of aluminium foil, put them on the tray with the sausages.

If someone is insisting on beans (decadent ingredient originally popularised by US forces during WWII), open a can and put it in the bottom of the oven on a square of aluminium foil for when the sauce spills over (another pan wash saved).

Cut tomatoes in half, put them on the tray among the sausages. Arrange the bacon on the second tray, black pudding, and griddle rings for eggs. Put the tray in the oven to heat while you get ready to make the toast. After the tray has warmed up, put a spoonful of oil in each egg ring and put the eggs in.

Make coffee or tea, and toast. Serve everything up when it looks ready.

Low maintenance cooking - neglect until cooked, clean up by discarding aluminium foil, and it really is the best thing to do with streaky bacon if you're eating it for breakfast. You can make it go right through to crispy in the oven, and you won't mind at all!