In the 1970's in Canada (Ontario), I ate this food, it was referred to as "candy". However, it was some sort of fatback/bacon type of stuff (though I don't remember any meat, it was just soft fat inside the crispy outer shell; also I don't remember it as being particularly smokey), that was cut up into bite-sized cubed, and fried until crispy. Is this some type of traditional Canadian dish? What exactly was it made of?

From what you describe it sounds like čvarci. In the U.S., especially in the south we call them cracklings (or cracklin's). Basically it is what is left from cubing pork fat and rendering the lard out. Makes a quite tasty snack and from what I read was/is a popular delicatessen snack in some areas of Canada. We often make this with fat from a ham or salt fatback. 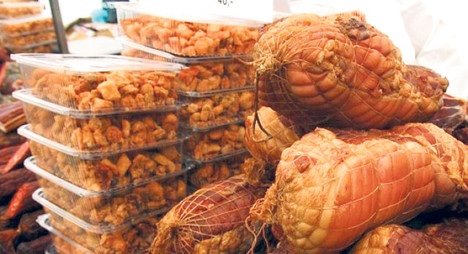 Note that there are many First Nations in southern Ontario.

4
What is fat tripe?
3
Can anyone identify this Chinese candy?
3
English name for cut of meat (Cacho de Paleta)
4
What is the name of a dish where meat is doused with brandy and lit on fire?
2
What is this cut of meat? Ideas on what to make?