How can I produce a more soggy Neapolitan pizza crust?

I've been following the Serious Eats recipe for Neapolitan pizza dough(exception I use bread flour), and cooking it on a baking steel. I cook it at 550 degrees(preheated for 1hr) for 2mins exactly, very near the heating element at the top of my oven, with the broiler set to high.

I do not use 00 Flour "Tipo". Instead I have been using bread flour. This is for a few reasons. I have learned that 00 Flour works well above 700 degrees, which I do not have. And it also has a much higher cost for me.

The crust comes out with nice char both on the top and bottom. The toppings are cooked well too. What I don't end up with is a nice soggy crust that I prefer in Neapolitan style pizza. Instead the crust is quite crunchy near the center and could easily stand up to tons of additional toppings(not my preference). The cornicione(edge) of the pizza is puffy, full of bubbles, and somewhat chewy. I'm quite happy with the cornicione but the center should be floppy/soggy/wet and I'm not sure how to achieve that, or if I can at all without a 900 deg wood fired oven.

Some wonder why I would want a soft, soupy, soggy center of my pizza. Having that is one of the main characteristics of Neapolitan pizza. I thoroughly enjoy using a fork and knife to cut and then scoop up the gooey amalgamation of favors in the middle of a fresh pie. As stated on Serious Eats:

Unlike a crisp-crusted New York-style or hefty Deep Dish Chicago-style pies, a Neapolitan pizza will have a soft, tender, nearly soupy center. Some folks find this off-putting. I personally like the sauce, oil, and whey-soaked bits of tender crust that form down in there, and I'll fight my wife for my share of it. 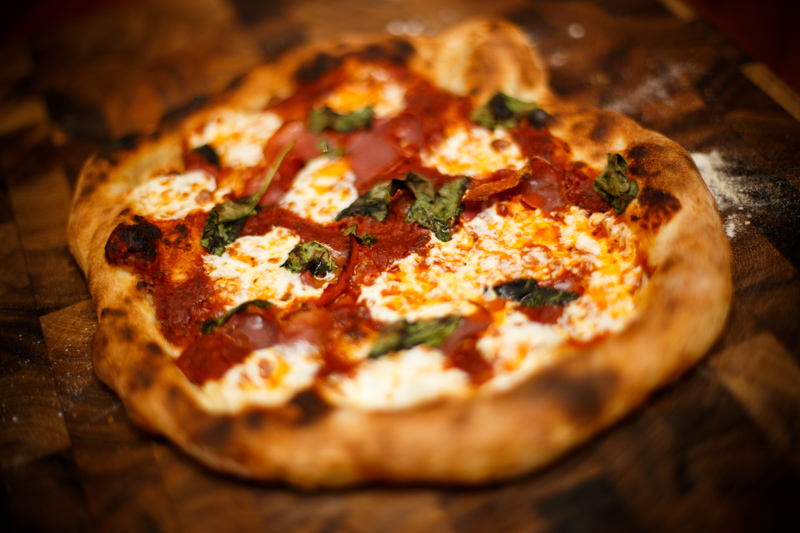 It sounds like you're doing several things differently than the recipe (different flour, different temperature, different baking surface...) though I don't actually see shaping/baking instructions on the recipe you linked. If you want to stick closer to that recipe (than the other answers...), here's a few other thoughts of potential problems and a few things to try to alleviate these potential problems.

Looks good; I think I'll have to try this. Good luck! Post back if you discover some improvements...

Sorry to dig this up months later, but it's a great question, one that I've struggled with also. I have baked pizzas in a 700-800F wood oven, and had the same complaint: beautiful coloration, decent spring, but not moist enough. I'm using dough that's much closer to the Tartine method hydration level than typical pizza dough, so I don't think that the answer lies in just upping hydration, although it might help.

Instead, I have looked at two ways to improve: topping moisture and shaping.

It's hard, and expensive, to get really nice mozz here (in the states). Think about the fancy imported mozzarella di bufala: wet, hardly chewy at all, very milky. It's not what most Americans even think of as mozz. I don't know what kind of cheese you're using, but in my experience, it's hard to go too wet on the cheese in imitating pizza napoletana. I've had better luck just subbing a soft triple cream cheese if I can only get dry chewy mozz. Also, the traditional sauce is crushed raw tomatoes. Not cooked at all - again, much moister than what Americans typically put on pizza. This is a cheaper way of changing the toppings to include more moisture.

Also, I got a clue from Una Pizza Napoletana, where I've had the best version of pizza in this style that I've ever eaten. There's a video on their homepage with some brief glimpses (starting at 40 sec) of Mangieri (chef owner) shaping pies. I was surprised mainly by how big his dough balls are. Those have got to be 8-10oz beasts, and he's making pizzas 12" across from them. There's clearly a lot of dough getting left in the cornicione. Also, his dough doesn't look particularly proofed. I've incorporated some of these things with results moving in the right direction.

All in all, I think there's a reason that this style of pizza is so highly regarded. It's damn hard to make! The pie you pictured is gorgeous, and 99% of people would say it's near-perfect. What makes pizza napoletana different is that at its best it's like a pizza and fresh-out-the-oven loaf of bread rolled into one. Getting the chewy steamy bread part is hard; I hope a bit of this helps.

I'm also a lover of so called "Vera Pizza Napoletana". By coincidence, I made yesterday this Neapolitan Pizza style using this Serious Eats method. Also see this step-by-step instructions.

It's all about heat capacity, conduction and radiation. You don't need a 1000°F oven to bake your pizza because doing it on a skillet will have almost the same effect since it will deliver more heat at lower overall temperature. The stainless steel and aluminum core of a good skillet can both hold significantly more energy and better at conduct that energy into the bottom of a pizza.

It's incredibly easy to do and the outcome is very good.

I think that baking at lower temperature will do the opposite effect. Lower heat will dry out your pizza. If you want it soggy, you want high heat to cook the dough before the fillings dry.

Perhaps this is an obvious answer - but if your center is too dry, add moisture. If you're happy with the edges and the rest of the pizza, then meddling with other variables (like time, temp, or flour) might disturb the things that work - a possibility to keep in mind for if smaller adjustments don't work, but not my first adjustment.

For myself, when I want to adjust moisture in a recipe, my first go-to is to sprinkle water in it. Low tech, but it works for me - it promotes a beautiful melting in slightly drier cheeses, and keeps crusts from drying out (my typical problem). Maybe sprinkle a tablespoon of water over the pizza, or maybe splash it right down over the center, or maybe precisely eyedropper the water just where your want it (depending on your textural preferences). You can add the water while the pizza is being assembled (for hydrating ingredients), or just before you bake (for a slightly less cooked center), or after it is taken out of the oven (for general sogginess after it has been cooked properly).

After that, evaluate the difference and tweak accordingly. Maybe you need more water, or to soak individual ingredients pre-assembly, or sprinkle over the top more evenly, or place a puddle of water on your serving plate, for it to sog up the bottom crust center after the pizza is placed on it. Maybe you want a little more flavor, and would like to try sprinkling milk instead of water - or you want to add a little more oil to the center. Maybe the introduction of wetter ingredients (like Gabriel Saunder's suggestion of cream cheese instead of, or as well as, the mozzerella) will help, or you want a moister sauce.

After that, you might discover other tweaks that improve your recipe, or that you want to try a bigger change (like the aforementioned time baking, temperature, and flour type). You might find all your problems are solved with an eyedropper of water (or other liquid) at your workstation.

I'm not sure why anyone would want a soggy crust, however if that's what you want lose the baking steel. The reason for using a steel or stone is to give you a crunchy crust, try using a baking tray instead.

Also, you can try baking at a lower temperature, not a higher one. Lose 100F on the oven and you're more likely to get sogginess.

To me it sounds like you are doing it right, not wrong. Soggy - why?!

Not the answer you're looking for? Browse other questions tagged flour pizza neapolitan-pizza or ask your own question.

9
Will my results differ when using a sourdough starter vs poolish for pizza dough?
1
Doctoring up part-skim low-moisture mozzarella for pizza

10
How can I get a takeaway style pizza base?
4
How do I get a chewy crust from homemade pizza dough?
3
What can I substitute for Rice flour in a gluten-free pizza?
3
Crispier pizza crust. What surface to go for in a home oven?
1
Best thickness for shaped pizza dough for good sliding from the peel/tray into the oven
2
Flour protein and browning
5
Dense pizza dough- need help! How to make lighter and more airy pizza?
1
Why is my pizza coming out “soggy”?
2
Tapioca pizza crust is undercooked?
0
How to make cauliflower pizza crust without using parmesan cheese?