What is the difference between a New York Strip and a Bone-In New York Cut Sirloin?

The iconic Smith & Wollensky Steakhouse in DC was not able to answer my question at dinner and I truly wish to know the answer.

The short answer? The bone. And here's why.

As this page shows, (the Wikipedia entry for Strip Steak), there are several name variants for the very same cut of beef. You've simply hit upon two of them, let's say. A New York Strip is a sirloin, but is generally cut from the uppermost section where, that is, the meat is most tender (aka does less work). This is called the strip loin part of the sirloin. It's my personal favorite, bone in. But that variation is known as a Kansas City Strip. This is the distinction you have made with the idea of a "Bone-In New York Cut Sirloin"

That said, the New York Strip may be cut, prepared, and served with or without bone. The presence of bone adds just one more dimension of flavor that some diner's prefer and, of some note, serves to prove that the cut came from the strip loin. More definitively, here we find

Here too, we find yet other variants on the name as well as a graphic which shows where the cut is taken from 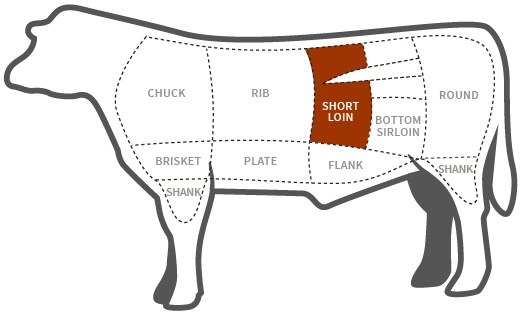 Given all these nuances and variants, it's no wonder not even the surest restauranteur had for you a ready answer to this question.

Having since learned that this is a Smith & Wollensky menu item, as worded, there's really no excuse for their not having been able to make for you this distinction.

The Porterhouse steak is a T-bone, but with the full filet mignon.

Not the answer you're looking for? Browse other questions tagged cut-of-meat or ask your own question.