What is the white dust on red grapes?

I bought some red grapes, and they have a thin layer of white dust on them. What is this? It has no flavor and seems to be harmless, but sources differ on what exactly it is, so if anyone has an authoritative source, I'd be interested to find out.

This coating, which wipes right off and is indeed harmless, is called the "bloom" of the grape or sometime the "blush". As described here, (the wiki for Fermentation in winemaking), it contains trace amounts of natural yeast, though thought to be the result of ambient yeast rather than the result of growth process proper.

It’s mostly harmless wax, says Kay Bogart, a winemaker who works in outreach for the University of California at Davis’s viticulture program. The grape plant produces it to protect the berries from moisture loss. It’s also often just plain old dust, adds Jim LaMar, a professor of wine sensory evaluation at California State University, Fresno. Until recently, winemakers believed the white stuff was yeasts, responsible for wine fermentation. Now they believe such yeasts are airborne. In any case, that white stuff isn’t pesticide residue. Which is not to say that there isn’t pesticide residue on the grape, so wash it anyway before you pop it into your mouth.

In the book Caravaggio: A Life Sacred and Profane by Andrew Graham-Dixon, we find of Roman mythology the following statement regarding Bacchus, the ancient god of wine and intoxication,

The bloom on the grapes, which dusts them with a layer of whiteness and dulls the reflected light caught in their opalescent skins, is echoed by the dry and whitish lips of the god himself. 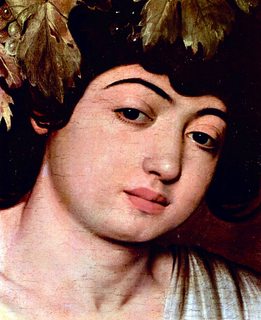 My plum tree had its first harvest this year. They all have a powdery coating. I have not sprayed them with anything and i dont live anywhere that they could get covered in dust. It wipes of easily if you do it before cleaning. After i put some in a bowl of cold water it was hard to remove it, so best to wipe them before rinsing.

I lived in Cyprus for many years and the white dust on the grapes bought there was the residue from all the insecticides that are sprayed or puffed onto the grapes to prevent disease and insect attack. The locals when asked would say its poison!!! No one would eat any fruit without thoroughly washing it.

I have experienced two kinds of white coatings on grapes - one is called "bloom" and although it appears to wipe or wash off, it often reappears immediately. This is a natural part of the grape. The powdery substance that really wipes or washes off completely, must be pesticide or fungicide. Wash thoroughly!

I buy red organic grapes and the white coating is on them, too, so it must be something natural, however, I've not seen it on regular grapes.

I've been told that the white powdery coating on purple grapes is naturally occurring acidophilus. You can also see this same thing on other deeply colored fruits and vegetables, such as plums, blueberries, and purple cabbage. It is actually on all produce and other living things - green grapes, green cabbage, cauliflower, etc, but you can't see it as well on light colored plants. It exists on healthy human skin, too. I think it is a good thing to have this because it is a beneficial bacteria.

Not the answer you're looking for? Browse other questions tagged fruit or ask your own question.

4
Cause of watermelon rind rotting (at room temperature)
2
What's the difference between black currants and red currants?
14
How to peel, cut and prepare prickly pears without getting the thorns in your skin?
2
Last few times I bought "fresh" stone fruit the stone was gone
2
Appliance to wash or scrub fruit and vegetables? Washer or scrubber
4
Are Blood Oranges actually that red
4
Soaking fruits and things in alcohol
1
Uses for tzimbalo fruit of varying ripeness?
0
What could it be the white fatty substance I found in raisins?