What are the differences between a Dutch oven and ceramic casserole?

I've been looking for information about the difference between cast iron Dutch ovens and ceramic casseroles.

I use my Dutch oven for baking bread and would like to know if ceramic will have the same effect on the crust.

Aside from the fact that cast iron and ceramic require different care, I have found little information about the relative properties of the materials.

I imagine that cast iron is a conductor and ceramic is an insulator potentially leading to different effects during cooking. However, both have been traditionally used for slow roasting and baking.

Is there any difference and if there is, what is it?

The main distinction made by The New Food Lover's Companion (Fourth edition, 2007) is that a "casserole dish",

can be glass, metal, ceramic, or any other heatproof material,

while a Dutch oven is

usually made of cast iron.

Another distinction is that the Dutch oven may be a kettle, which typically implies the presence of an overarching handle from which the entire pot may be hung (as over a fire), while no such option is offered up for their definition of a casserole.

This is generally confirmed by the fact that while, yes, both we and the marketplace (sellers) seem often to use the terms casserole and Dutch oven interchangeably, whenever the vessel is equipped with an overarching handle retailers seem to avoid referring to it as a casserole. More specifically, when you turn to high end concerns in service to restauranteurs, such as here, there's no confusion on the matter. Casseroles invariably lack overarching handles and, unlike Dutch ovens, may come in quite small sizes and don't necessarily require lids. So while Dutch ovens may or may not have overarching handles, they invariably have lids and are invariably substantial in size. The compiled side-by-side photos below, as extracted from WebstaurantStore, goes to show just how severe the contrast can be between the two items.

Second, to the question of browning:

Here are a couple of examples which seem to speak for themselves, as far as how well ceramics or ceramic coatings can be expected to perform when baking breads.

Williams & Sonoma offers a Cast-Iron Loaf Pan (photo below) about which it says, 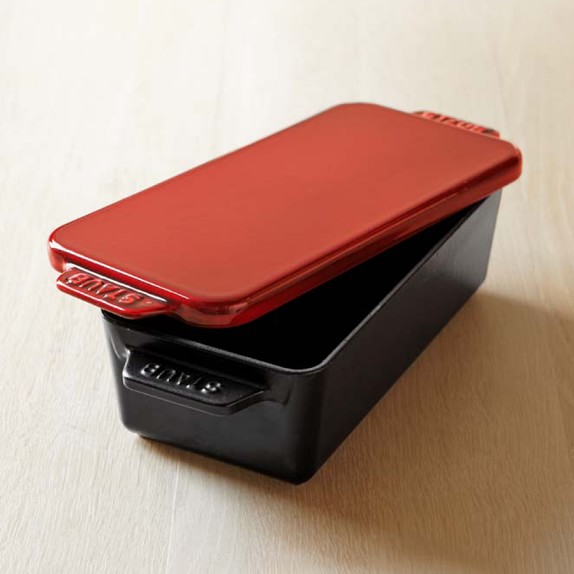 Williams & Sonoma also offers a Bread Cloche (photo below), for which it makes the following claim,

Duplicating the benefits of baking in a brick oven, the ceramic bread cloche turns out individual loaves with tender, moist interiors and crispy, evenly golden crusts. 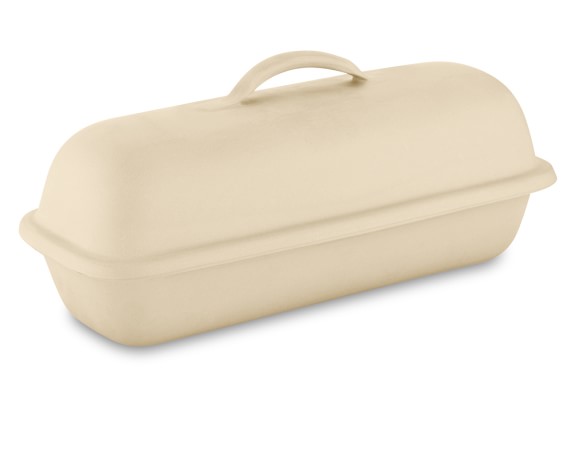 I'm sure there exist any number of additional examples of bakeware, each of which possesses similar properties to these. (The links provide a good deal more information.) I hope this however is enough to help you take the plunge, so to speak, toward this option if that's what you're interested in doing.

7
Can I use a rectangular ceramic pan instead of enameled cast iron to bake bread without losing the nice crust?

10
Cast Aluminum Vs Cast iron Dutch Oven
8
What's the difference between a French oven and a Dutch oven?
8
Why are stone ware and dutch oven items exempt from bacteria?
7
Are oven bags anything more than disposable dutch ovens?
5
sauce pan vs. dutch oven vs. stock pot - any difference besides size?
1
How do I reheat a casserole in the oven?
5
What causes dutch oven flavor?
3
Does wear and tear limit the usefulness of a Dutch oven?
5
What accounts for Dutch Oven price variation?
2
Baking Bread in Dutch Oven with Hairline Crack