[In preview: ...whether baking or broiling the doneness of the fish is not determined by knowing or measuring inside temperatures. And since the broiling method just means as high as your broiler will go, the only setting one needs knowledge of, (and that for baking), is 450°F or 230°C. The other takeaway is that it is arguable whether one should even attempt broiling whole fish, at least of any real size, in a kitchen oven.]

In his book The Science of Cooking, Peter Barham reiterates a distinction made by Rick Stein in his book Fruits of the Sea. When it comes to how one should think of "baking", at least as it applies to fish fillets and whole fish, he divides baking into a pair of subcategories denoted baking and roasting.

Of baking he says, (my brackets),

Of roasting he says, (my brackets, my bolds),

Roasting is the process of putting a large piece of fish, or a whole fish on a trivet over a shallow pan and exposing it to the fierce heat of a hot (230°C) oven. [That's around 450°F.] When cooked properly, the fish skin will crisp up well providing a good combination of textures from the crisp outer layer to the moist and tender flesh inside the fish. However, the risk of overcooking is very great so this is a method that needs plenty of practice to get the timing just right.

The variability of domestic ovens is so large that it is not possible to provide any accurate guide to cooking times for roast fish. You simply have to test to see when the skin becomes crisp and to try to tell, by gently pressing on the fish when it starts to become dry. The idea is to let the skin crisp up, but to prevent the flesh becoming at all dry.

Therefore, if to choose the baking method, (or in Barham's language roasting), "internal temperature does not need to be measured per se but is more than adequately accounted for (gauranteed correct) by the exterior condition of the fish (crispiness) and moistness of the fish (when pressed down on) at the end of its cooking cycle. Thus it can be said for purposes of baking a whole fish, irrespective of size (within reason), the oven temperature should be set at 450°F (230°C).

There are however other important qualifiers which will be spoken to shortly. But first let us turn our attention to what Barham has to say about broiling fish.

On broiling, which he refers to as grilling, Barham has several things to say. Most generally he calls it,

the method most fraught with risk of ruining a perfectly good piece of fish.

He goes on to explain, (my parenthetical),

Many domestic grills are not very powerful, so by the time that the outside has browned and the flavour developed, (by which he means the Maillard reactions), the inside of the fish may well be thoroughly overcooked.

From here, he goes on to make a case for using a blowtorch on whole fish rather than a conventional grill (broiler), moving the torch constantly over the fish in sweeping motions, the essence of which can be summarized by this extraction,

As soon as the fish is lightly browned on one side, put the blowtorch down, turn the fish over and repeat on the other side. The whole process should take no more than a minute or two.

So unless one has access to a professional-grade, super high heat producing commercial oven, Barham plainly would have us to abandon even considering putting a fish under our broiler at home, especially a large fish.

Certainly however there is at least the appearance of disagreement as to the merits of so severe a stance. I say appearance, because professional advice given to professionals implies use of professional-grade equipment, and so should probably not be applied too broadly. Wayne Gisslen in his Essentials of Professional Cooking has the following (among many) points of advisement for broiling fish which, it must be reiterated, may or may not work with a standard kitchen stove,

Gauging by the language he employs, it is interesting to note that Gisslen is not thinking of fish here in terms of overall weight so much as he's thinking of it in terms of thickness.

For a moment of synopsis: If to rely on the above considerations, whether baking or broiling the doneness of the fish is not determined by knowing or measuring inside temperatures. And since the broiling method just means as high as your broiler will go, the only setting one needs knowledge of, (and that for baking), is 450°F or 230°C. The other takeaway is that it is arguable whether one should even attempt broiling whole fish, at least of any real size, in a kitchen oven.

Beyond these limitations, in her book The Fishmonger's Apprentice, columnist and author Aliza Green echoes some standardized considerations, or matters of practice, when dealing with fish one intends to prepare, a couple of which are as follows, selected specifically because they involve the use of snapper. 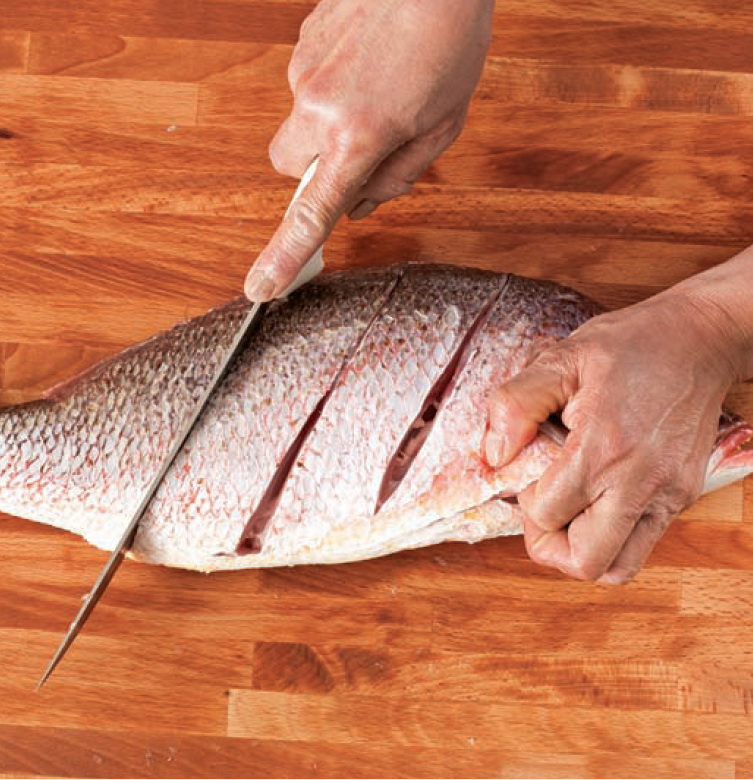 0
Internal temperature of cuts containing abundance of connective tissue
3
Time and Temperature to bake small fruit cakes
2
What does a meat thermometer display if the meat temperature is uneven?
2
How long should I bake a hamburger meatloaf, and at what oven temperature?
4
Whole Chicken - why won't the breast cook even though thighs are done?
1
Oven does not have a temperature notification sound
2
cooking time and cooking temperature
3
Measuring Oven Temperature: Surface or Air?
3
Figuring out gas oven temperature numbered 1 through 7