Reasonable level of inaccuracy in thermometer?

A little over a year ago I purchased an expensive digital scale / thermometer combo: http://www.breville.com.au/thelittlegeniustm-kitchen-scale.html

It works fine however recently I took a go at testing the thermometer to see if it was reading accurately. I fill a pan up with water and left the probe sitting in, waiting for the water to boil.

When the water was a rolling boil, the thermometer was only reading about 94C or 96C (can't remember which one, will do another test tonight), which was disappointing given the cost of the product.

The scale has a five year replacement warranty so I sent an email through to the customer support department. This was their response:

Personally, I find this hard to believe and couldn't see it specified anywhere on their website. The thermometer is stated to work up to temperatures of 150C, which, means it could vary as much as 7.5C at that level...

Given that the thermometer gives reading to one decimal point (i.e. 96.6%) it seems ridiculous to accept that the temperature could actually be anywhere between 91.X% to 100.X%.

Is this to be expected with food thermometers or should I argue my case? Are there any other reliable thermometers I can use as a point of reference?

EDIT: Did some further testing over the weekend. I tested it again in a shallow pot of boiling water and it was hovering around the 96C mark. After filling the pot so that most of the probe would be submerged, it began to hover between 97C and 97.5C.

That is ridiculous. 5% is simply too large for an acceptable margin of error. I'll accept 2 degrees F tops, and I have never spent that much on a thermometer.

If you want to spend that kind of money, this one won America's Test Kitchen testing: 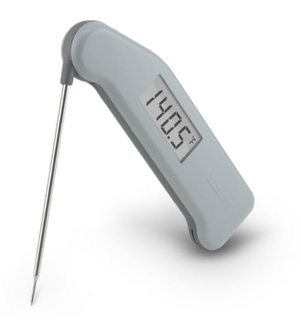 That's the Thermopen. It's accurate to less than a degree F and it gives a reading in 3 seconds.

These two thermometers tied the testing for less expensive thermometers. They are both also accurate to less than a degree F.

Incidentally, this is my scale. Amazon tells me that I bought it in July of 2011. I highly recommend it, it's spookily accurate. That scale, a dollar store timer and one of the recommended lower cost thermometers would pretty much wipe the floor with your product at significantly less than half the price, and would be more convenient to use. I want a timer I can put in my pocket, and a thermometer I can bring to something on my oven shelf without bringing my scale along for the ride.

To me, that makes no sense, imagine trying to gauge the doneness of a Thanksgiving turkey with that thing! Never mind that you can't trust the reading.