What is Canadian-style sour cream?

But when I opened the container, it sure seemed to be regular sour cream. So what's the difference? 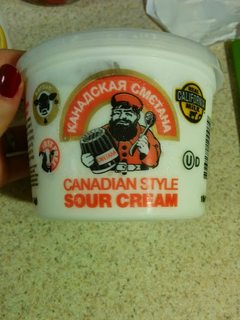 From this discussion it appears to be a way of differentiating it from Russian-style sour cream or smetana. Maybe it came about during the Cold War and it couldn't be sold as "American-Style" so they called it Canadian-Style... or maybe it's just a marketing ploy.

In short, if you want Canadian Sour Cream but don't want to pay extra for it, just stir the american sour cream with a spoon until smooth, then keep adding enough heavy whipping cream and stirring after each addition until it's desired consistency. I do this all the time :)

Not the answer you're looking for? Browse other questions tagged sour-cream or ask your own question.

6
Is it possible to make Sour Cream at home?
11
What is sour cream?
0
What is sour cream called in Hindi?
3
How to thicken a sour cream recipe?
1
Does sour-cream go bad?
3
Is unsour sour cream too new or too old?
2
Is sour cream in super markets made in the traditional way?
8
What is the difference between cream cheese and sour cream?
1
What are the conditions that raw milk, just milked from a cow, should stand to obainin thick traditional Romanian smântână?