How can I be sure I'm buying the right KitchenAid beaters?

My daughter has a KitchenAid Architect stand mixer. Through a series of moves, she's misplaced the wire whip and the dough hook and I'd like to get her replacements.

Easier said than done! Stores don't seem to carry them. The KitchenAid website is useless. Amazon sells plenty - but they have descriptions like Tilt Head, Narrow Bowl Lift, or Wide Bowl Lift. I don't know which of these the Architect is. How can I figure out this terminology and get the right replacement beaters?

On a 'tilt head' mixer, the bowl attaches with a screw motion into the base of the mixer. The motor portion of the mixer is hinged at the back, so the front of it can be lifted up. There's a lever to lock the head from moving on the right side (near the motor, opposite the speed control lever). And if you don't engage it, you can make a real mess 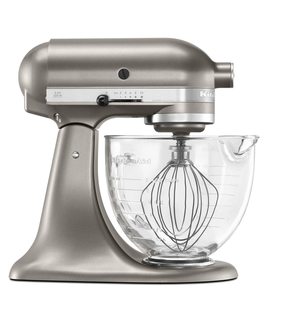 On a 'bowl lift' mixer, the bowl has two little tabs on each side, which attach to two arms that protrude from roughly half way up the mixer. The motor portion of the mixer is fixed to the stand and cannot move, instead, there's a lever on the right side of the base (near the arms) that will move the arms up and down so the bowl moves instead of the motor portion. 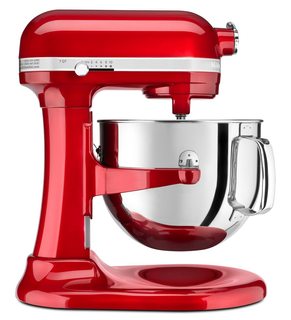 As for narrow vs. wide ... I have no clue what the corresponding measurements are.

And I took the images from an answer from Doug that's been deleted. If someone has pictures from the other side (showing the relevant levers), feel free to replace them.

Measure the length and the circumference and ask for the manufacturer's. It worked for me.

4
How can I prevent the odor in my dishwasher?
7
How do I remove my KitchenAid attachment?
6
My KitchenAid mixer head will not lock in the down position. How can I rectify this?
1
How can I clean my peeler?
4
Can any KitchenAid stand mixer attachments be used to make peanut butter?
4
How can I reduce the heat output of this heating element?
2
How to make sure teapot is safe after being on fire without water
2
Where are the missing speeds in my KitchenAid mixer
5
What is the right kind of syphon to use for fish batter?
6
I'm not looking to learn a new skill; how do I make my knives better at cutting?