I wanted to try creating a type of curry filled pastry, but I am curious if there are any good doughs I could utilize that don't need the large waiting times/kneading/rising that most bread recipes require.

Basically, I'm thinking the ideal case is if there is quick and easy dough that I can just prepare, fill, and toss in the oven and get a little to moderate rising while it's cooking. I suspect some kinds of pastry recipes can do this but I don't:

b) know how heavily they rely on the sugar in their recipes.

Many filled doughs don't require long resting times (maybe 30min to an hour), but they generally do require a little bit if kneading to make sure they're sturdy enough to hold a filling. If you have a stand mixer or a food processor, you likely won't need to do any hand-kneading.

I'd recommend looking at recipes for either empenadas or samosas. (Look for baked recipes; somosas are traditionally fried.)

You could also take the South African approach with bunny chow, and bake the bread, then hollow it out fill with curry. Or make a choux pastry, and pipe in the curry after it's baked (so it'd be a savory eclair).

Yeah, how about biscuit dough? That's a common way to do a quick and easy chicken pot pie. It might be a little tricky to actually enclose the curry in the biscuit dough, but it should be doable.

For reference, here are a couple of "pot pie" recipes that use biscuit dough on top of the filling:

Add a Pinch (from scratch) 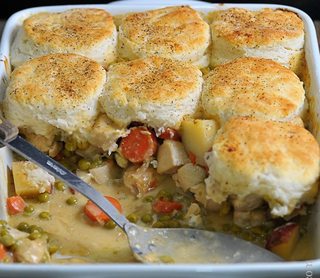 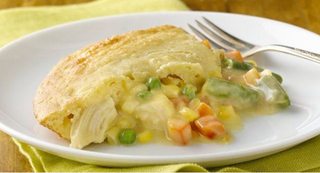 I specifically included the Bisquick recipe, because they have a thing they call "impossibly easy" pies. That is a way to use the product that is very much like enclosing a curry or stew in a pie, but really isn't. I don't know if you live in a part of the world where you can get Bisquick (Jiffy is another brand). Check out these recipes: 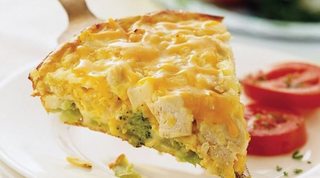 Conveniently, just after posting this answer, Cook's Country (America's Test Kitchen's sister show) aired an episode with their version of an "impossibly easy" pie. Instead of using Bisquick, which is made of flour, baking powder, salt and shortening; they used half-and-half and melted butter for the fat in the batter. Their recipe calls for 1/2 cup flour, 3/4 tsp baking powder, 1 cup half-and-half, 1/4 tsp salt, 4 eggs and 2 TBS melted butter for the batter in their "Impossibly Easy Ham and Cheese Pie"(sorry, paywalled) which doesn't have a wet stew or curry filling, it's just ham and cheese. The whole pie is quiche-like. It's not a pastry or dough, it's a batter, but it does show a way to use flour in a recipe that would often call for Bisquick.

I just came across this, which IS enclosing a saucy, stew-like product in biscuits. This uses refrigerator dough biscuits, but homemade would be just the same: 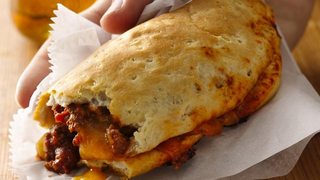 The relevent instructions are:

Press each biscuit into 6-inch round (a Grands biscuit is 58 grams).

Spoon 1/3 cup meat mixture onto center of each round. Fold dough in half over filling; press to seal.

Bake 9 to 14 minutes or until golden brown.

Based on you mentioning curry and bread, have you thought about either chapatti or roti? Asides from them being Indian bread and so complementing your curry completely, they are quick and easy to make a little kneading but will take less time than making pastry or biscuit dough.

Just make the dough, roll out into a few rounds, fill one half, then fold the other side over using a little water to seal them. The thicker you roll the dough the more bready it will be. I personally like the idea of the outside being nice and crisp but the inside being soggy where all the curry juices have penetrated.

Doing it this way you could even do a big batch in one go and freeze them pulling a few out when you're hungry and stick them in the oven.

Also regarding sugar content, a simple roti recipe has no sugar added, just flour and water. For example this recipe just has 225g self-raising flour, ½ tsp salt, and 1 tbsp vegetable oil (plus extra for frying).

This seems like a great use of frozen pie crust, the ones that come in a sheet not pre-formed in a tin.

This would certainly reduce the time and effort on your side.

Not the answer you're looking for? Browse other questions tagged substitutions bread dough pastry filling or ask your own question.

19
How to get threads in a yeast dough?
3
Why didn't my 100% whole wheat bread proof?
5
Why punch down knead free bread?
7
Why does my dough always need more water than the recipe calls for?
4
Should enriched doughs pass the windowpane test?
2
When and how much flour do I add when mixing dough?
5
Issue getting Atta bread right
4
No knead bread dough looking slimy after a week
3
Can I refrigerate lower hydration dough for storage like I would no-knead dough?