I bought some cheese labeled "French raclette" that's quite soft even when refrigerated. (In the store it seemed almost gooey, losing it shape, and in my home fridge it's still soft but a bit springy - maybe like a very very soft havarti, maybe way on the soft side of semi-soft.) It seems like you'd just make a giant mess by melting it, and it looks impossible to slice cleanly, so it seems like it'd be impossible to use as raclette cheese in typical ways (slicing and melting over things, or melting a layer and scraping).

Is this cheese really intended to be used as raclette cheese, or is the label a misnomer, or is there perhaps something besides melting meant by raclette here?

(In case it's relevant, I have the tabletop variety of raclette grill, where you put the cheese, or things with cheese on top in trays underneath, not the original kind where you melt half a wheel of cheese and scrape it.)

I don't know whether it's meant to be melted but it's not how raclette cheese in France or Switzerland is usually like. Livradois is not a region I would spontaneously associate with raclette either. Having grown up in the Alps, I would personally consider raw milk raclette cheese from Savoie or Valais as the most authentic and those cheeses definitely hold their shape, even at room temperature.

That said, raclette is not a protected name in either Switzerland or France so it's produced all over the place and it's increasingly common to find flavored variants (with black pepper, mustard seeds, etc.) I also know people who like to melt blue cheese or reblochon (a soft cheese from the Savoie area) under a table-top raclette grill so why not some other soft cheese?

Finally, note that what passes as the ‘traditional’ way to prepare raclette is neither a table-top grill nor melting the cheese in a pot and dipping bread in it, fondue-like, but actually exposing the whole piece of cheese to some heat source and scrapping the melted bits as you go, as shown on the Wikipedia article on the dish.

Turns out it's not mislabeled: it's actually "spécial raclette livradoux". Embarrassingly enough, I just noticed that there's a fragment of the whole-wheel label wrapped up with it, with a "vradoi" that let me find it, and it's consistent with this picture: 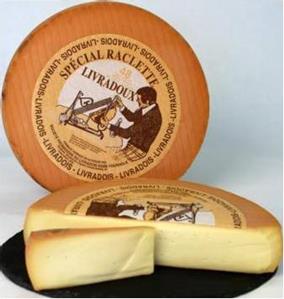 Different pages describe it as semi-soft or semi-firm, which still seems a bit of an exaggeration to me. It's possible to make irregular slices, but definitely nothing super-clean, and I'm afraid if you tried to melt a layer you'd melt a lot more than that. But cutting off a hunk/slice and melting in the tray does work just fine despite my initial impressions; while it's pretty soft before heating, it doesn't melt that much more liquid than a firmer cheese. And the flavor is definitely similar to other raclette cheeses I've had!

So it seems quite plausible that it's intended for this version of raclette, but not the older traditional version. (Of course, I was wrong about "completely impossible to slice" so I could be wrong about that as well.)

I think it is mislabeled, at least as far as making raclette "the usual way" is concerned. I feel sure it could still be used as such, maybe spoon it into the tray and heat it up very quickly. Though probably much more difficult to get a nice "gratin" unless you can turn the heat up really high, or perhaps use an oven instead, on broil.

What you got sounds more like the kind of soft cheese you would put on a cracker or piece of baguette bread or some such. Odd labeling, if you ask me.

I looked up a few videos (in French, native language) and they all use a more firm cheese, so it sounds like it's just mis-marketing to me to label that cheese "raclette cheese".

It appears that most often the cheese is heated separately from the rest, and then topped on deli and potatoes (and other desired things) rather than being heated with the things. See this video, in French but images are obvious enough.

2
What do I do with all this cheese?
5
Making Raclette without special equipment or specific type of cheese
6
Is there an application for soft cheese rinds?
7
What determines how hard or soft a cheese will be?
24
What's this "pucker" style hole on my cheese grater for?
3
Looking for an Italian cheese similar/identical to the French Brie
3
How to eat this kind of cheese
7
Please identify this nut covered cheese
3
French soup cheese
1
What kind of cheese "skin" is this?