Can meat freeze from the inside out?

Ask Question
Asked 7 years, 5 months ago
Modified 7 years, 4 months ago
Viewed 4k times
20
Want to improve this post? Provide detailed answers to this question, including citations and an explanation of why your answer is correct. Answers without enough detail may be edited or deleted.

We received a turkey recently which was meant to be 'fresh'. When it arrived it was frozen on the inside. We are told that the fridge was probably set a bit low so the turkey froze on the inside.

I'm not rocket surgeon, but I would have thought that meat would always freeze from the outside in, and then thaw from the outside in. Meaning in this case that the only way for the turkey's inside to be frozen would be for the whole turkey to have frozen and then partially thawed.

My question: is it possible for meat to freeze on the inside first or is by butcher pulling a fast one?

That's not how it happens. Turkey can be labeled "fresh" as in -never frozen- even if the turkey is held at temperatures below freezing. By law, 26F (-3.33C) is the cutoff in the US. If the turkey spends weeks at 27F, it can still be labeled fresh even though it would be considered frozen to any of us mere mortals.

So, if a turkey has spent 2 weeks at 27F, and you buy it and put it in your fridge, it's going to be frozen on the inside for a day or so, despite being labeled "fresh".

Here's more, pointed out by Phillip in his comment. From the Good Eats transcript: 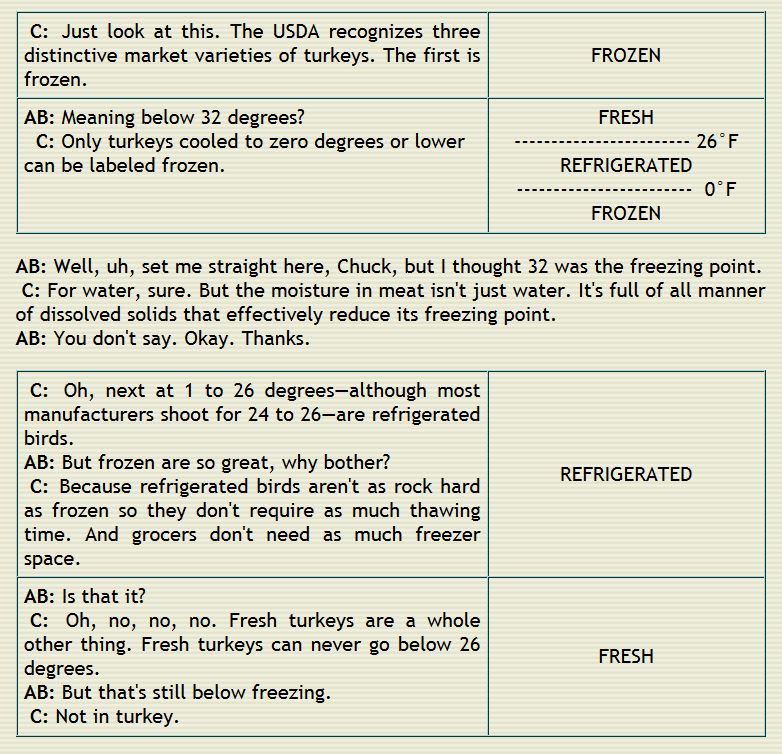 Welcome to Seasoned Advice. The real truth is that most "fresh" turkeys are not fresh at all. Especially in the case of branded birds that are shipped en masse.

The turkeys are most often shipped to markets frozen and they are thawed when placed for sale. (I have been inside of back room freezers and have seen them stocked there.) I have actually seen them placed frozen and allowed to thaw in the bunker. This makes me see red when the label clearly states that it is a "fresh" turkey.

So, essentially you are paying much more per pound because it is thawed or partially thawed when you buy it. In the case you describe, it sounds like the turkey was only partially thawed. And you are correct, meat freezes and thaws from the outside in.

I wanted to note that @Jolenealaska has given very accurate information in her answer. However, in grocery markets the refrigerated stock areas do not see temps that low and the freezer temps are much lower, often below 0°. Even if you have a local butcher shop and a butcher that you trust, and all guidelines were followed, if the inside is frozen the outside had to be frozen at some point.

I don't know anything about the laws regarding what can be labeled as "fresh", but to answer your actual question, no, meat (or anything else) won't freeze from the inside, out. The meat would freeze or thaw from the outside, in.

I suppose one could put some sort of hot or cold probe that was above/below freezing into the center of the meat. Then it would happen in the reverse direction.

First principals of thermodynamics, heat will flow from a high-temperature region into a low temperature region. Given that meat is essentially a solid, the only heat transfer will be via conduction, i.e., you must cool (or heat) from the outside in.

Clearly you could oversalt the meat, and in fact this would be required to get a significant difference in freezing temperature between the inner and outer layers.

Commercial turkeys are commonly injected with chemicals that could result in very small differences in freezing temperatures, but it is a real stretch to believe that any commercial turkey would actually freeze from the inside first based on chemical differences.

Depending on what you mean by "the inside", no, it's not possible for something to freeze from the inside out. The physics of the situation come from the second law of thermodynamics heat cannot spontaneously move from a cold place to a hot place. So, when you put an object in the freezer, the surface starts to give up its heat to the surroundings, then the interior starts to give up its heat to the surface and so on. The net effect is that the interior is always at least as hot than the exterior while the meat is in the freezer.

When you take it out of the freezer, the opposite happens: the outside warms up first because the environment gives heat to the outside, which passes it on to the inside and so on. So the only way that your turkey could be frozen on the inside but not on the outside is if it was frozen the whole way through and partially defrosted.

The only remaining question is what exactly you mean by "the inside". If you mean that, for example, the centre of the breast was frozen then the whole thing was definitely frozen at some point. If, on the other hand, you mean that the part of the breast closest to the bone was frozen, then it could be that bone conducts heat better than flesh, in which case the flesh next to the bones would freeze first because of the cold air in the cavity.

Isn't simply possible that the meat inside the turkey has less fat resulting in a higher freezing temperature point than the meat outside? Whatever the reason is would seem reasonable to think that a hot blooded animal typically exposed to cold temperature would evolve in such a way.

I say both; it's possible, but it defies all logic.

Yes the above discussion about freezing and thawing is probably right, but since the question is about if it's possible... Cut it and pour liquid nitrogen in it. It'll freeze from the inside out, maybe all the way through, and the nitrogen will evaporate so there's no trace.

Still, probably not what happened,the real thing is the freeze/thaw scenario. Firstly, it's hard to tamper with unsold products and get away with it, and even harder to do. it with something large, complicated to use, and rare as a jug of liquid nitrogen (well it's not rare but hard to obtain.). But you can see the other theory yourself, it's so simple. Get a tray of ice and let it sit somewhere warm and it'll be sitting in water and shrunk. Outside thaws and inside is still frozen solid.

Not the answer you're looking for? Browse other questions tagged freezing thawing or ask your own question.

0
Can a frozen turkey be "fresh"?
14
Is there a difference between freezing meat at 26°F and 0°F?
3
When's the best time to buy a Thanksgiving turkey?

3
Is refreezing a meal safe?
2
Help freezing chicken breasts
3
Raw Eggs, Chocolate Chip Cookie Dough...And Freezing
7
Dealing with frozen ground beef
1
Can I thaw whole Ginger root to use later?
3
Freezing meat - whole or in pieces?
4
Can I safely thaw and refreeze sorbet?
1
The center is still cold when I deep fry my precooked frozen chicken
2
I have some slow-cooked pork in the freezer and just need to warm it up